Share All sharing options for: Six Blues called up by Roy Hodgson

It's a banner day for Chelsea's England internationals -- Roy Hodgson has named six Blues to his squad ahead of World Cup qualifiers against Moldova and Ukraine next week. Does it feel like England are always playing Ukraine? I swear they're always playing against Ukraine.

Anyway, our list is mostly defenders. Ryan Bertrand, Ashley Cole, John Terry and Gary Cahill all get the call, with Frank Lampard and Daniel Sturridge thrown in for good measure. Good for them. I don't really like international breaks, but since this is qualifying rather than a friendly I'll save that rant for another time. The full England squad is after the jump, if you're curious.

Or, in pie chart form: 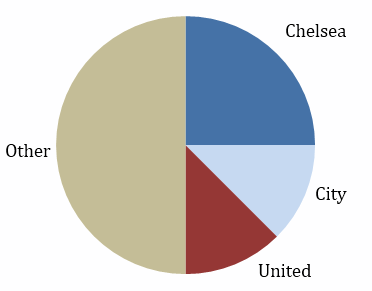