Yesterday we had a look at Atlético Madrid's biggest threat in centre forward Falcao, and today we're going to have a look at the Spanish side as a whole. Seeing as Madrid will be for many of you somewhat of an unknown quantity, we'll take a bit more of an in depth look than I would for a Premier League side.

Last season Madrid had a manager sacked (Gregorio Manzano) around the midpoint of the season. They turned to an ex-player in Diego Simeone, who managed to galvanize the team and turn their fortunes around, culminating in an extraordinary success in European competition. Sound familiar?

Diego Simeone founded his success at Madrid on reactive, counter attacking football. On paper, Madrid are a decent side, and there's one big standout on the list - that being Falcao, who we should all know pretty well. That's not to say the rest of the side isn't up to scratch: there are some excellent footballers in their squad, and there's a fair bit of strength in depth. We should be pretty familiar with the system Diego Simeone sets his team out in, because it's very similar to that of the one Roberto Di Matteo prefers at Chelsea: a standard back four, two deep lying central midfielders flanked by wingers who form a bank of four, with a playmaker in behind a menacing centre forward.

Madrid have played in two competitive matches so far this season, both in La Liga, where they recorded a 1-1 draw with Levante before a far more impressive 4-0 victory over Athletic Bilbao. Madrid has no suspensions or injuries to worry about, so they should be able to play with a full strength side. Exactly what that constitutes isn't entirely clear, so here's a visual depiction of how I think they will line up. 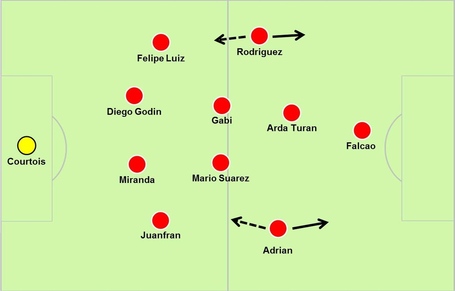 Taking it from the back, we should easily recognise the man between the sticks: its Chelsea youngster Thibaut Courtois, who excelled for Madrid on loan last season and has as such returned for a second stint in Spain. Despite some noises to the contrary, he is certainly eligible to play against his parent club. The Belgian will surely be relishing the occasion, as he has the opportunity to join in the celebrations no matter the outcome.

Ahead of him, Miranda and Diego Godin is firmly the first choice centre back pairing, and they played together in the demolition of Athletic. Flanking them will be dependable full backs Juanfran and Felipe Luiz. Neither is particularly aggressive in attack, preferring to offer defensive solidarity down the wings. They will tuck in narrow and sacrifice most of the flanks. Diego Godin will look to bring the ball out of defence occasionally, but on the whole this back four aren't particularly confident with the ball at their feet. They prefer to play short passes into midfield, and Chelsea could be well served taking advantage of this by instructing Fernando Torres to pressure the man in possession.

In midfield, the double pivot in the centre of the park generally comprises of Gabi and one of Mario Suarez or former Chelsea man Tiago. Mario Suarez had an excellent game in the Europa League final, which should suggest he will get the nod to play in midfield here, although Tiago did score an absolute thunderbolt as a substitute on Sunday. Regardless of who plays, their function remains the same: they look to spread it wide, distributing quickly to the more technically proficient players ahead of them. Mario Suarez in particular will drop deep to receive the ball from his centre backs. Gabi is the more combative midfielder, and he'll be stationed on the left hand side of the pitch, which means it would probably make sense for Di Matteo to select either John Obi Mikel or Michael Essien in that zone of the pitch.

On the wings, the Uruguayan Cristian Rodriguez has started on the left hand side in both of Madrid's games so far this season, and he will presumably do so again against Chelsea. eh He's a useful player, capable of playing left back as well, meaning that he's well served in the defensive dark arts and willing to track back. This probably explains why he features so prominently under Simeone. When Rodriguez receives the ball, he generally takes it around the outside of his marker and looks to play an early ball into Falcao. It's a useful tactic, and if Chelsea does play Juan Mata on the right wing, there will lots of spaces Rodriguez will enjoy in order to deliver the perfect ball.

On the right, despite home grown starlet Koke getting the nod against Athletic Bilbao, I would expect Adrian Lopez to be selected on the right wing, as he was in the Europa League Final. Adrian is a more direct attacker (as a consequence of his traditional position of striker), and he makes lots of aggressive runs into the channel between the centre back and full back. If Koke is instead selected, expect him to play a similar role, although he's more conservative in his movement and more willing to play the early ball.

The early crosses are central for Madrid: it's their primary source of attack, and the service from out wide is crucial for Falcao. They don't play through the middle very often, as a consequence of the unadventurous nature of their centre midfielders. The creative burden rests upon the band of three.

In the centre of that band of three is Arda Turan, who has been moved into the central playmaking position permanently following Diego's return to Wolfsburg. Last season, Diego played higher up the pitch and enjoyed a good relationship with Falcao, but Turan is slightly different: he likes to come deep, build up play, and occasionally drift to the left flank. In fact, in the defensive phase, Turan's positioning can make Madrid's shape look like a 4-3-3, with Suarez in between the lines.

While Turan certainly possesses the vision to make incisive passes centrally, he prefers to distribute to the flanks, ensuring Madrid retain possession. As a consequence of Turan's deeper positioning, Falcao is more isolated than he was with Diego, meaning long balls from Courtois are less successful than they were last season.

Finally, in the forward line, I spoke at length yesterday on Falcao's perks, and below I've included some screen grabs from the game against Athletic which demonstrate the devastating movement that makes Falcao so effective.

In the defensive phase, Atlético have adopted a more positive approach than the one deployed at the tail end of last season (again, similar to Chelsea). The wingers often look to close down the opposition full backs, disrupting the build-up play, before dropping back to form a disciplined line of four. In order to pressure the opposition, Gabi will often break off his line and close down the man ahead of him, forcing the ball wide before retreating to his nominal central position. That's when Madrid are in control: if they are in the lead or up against a stronger opponent, they form a barrier, forcing opponents to play around them rather than through them.

In terms of how Chelsea should approach this game, it ultimately depends on how Di Matteo approachs the match. If it sees it as a glorified friendly, then I would expect some experimentation in the lineup (some Victor Moses and Cesar Azpilicueta would be tasty). Otherwise, I would expect a full strength side including Juan Mata and Eden Hazard in the attacking third, with Ramires perhaps the better complement on the flank rather than Ryan Bertrand. The Englishman had an excellent game against Newcastle, primarily in his job in nullifying Hatem Ben Arfa. There's no real super threat from Madrid on the flanks that would require a winger for defensive purposes. Instead, I'd expect whoever it is selected on that side focusing on breaking past their opposing full back and playing as an outlet for long balls on the transition. The double pivot is also a curiosity: a repeat selection of Raul Meireles and John Obi Mikel would be well vindicated, although so much relies on how Di Matteo approaches this game. The temptation would be to indulge in some fantasy football with handing Oscar his first start, however in terms of attack and balancing the band of three, this probably isn't the way to go, as shifting both Mata and Hazard to the flank only increases their defensive responsibilities and denies them the freedom to interchange at will.

Atlético Madrid is a good side, but there's no reason why Chelsea can't control this game in the manner they did against Newcastle. We are firmly the better side across the park except at centre forward, but if Chelsea can pin Madrid back, they should be able to emerge victorious.