Newcastle United were one of the big stories of last season's Premier League season - their fifth place finish was built on a raft of exciting signings and some clever management from Alan Pardew - and they went some way to remind everyone of their ability in defeating Tottenham in Andre Villas-Boas first game in charge. So what exactly are Newcastle doing on the pitch to be so impressive? Let's find out after the jump.

It's not immediately obvious what formation Newcastle will roll out with on Saturday, but the flexibility of their players means we can use one image to get an idea of their starting line-up. Here's the side that started against Tottenham, in the 4-3-3 formation they used in the second half. 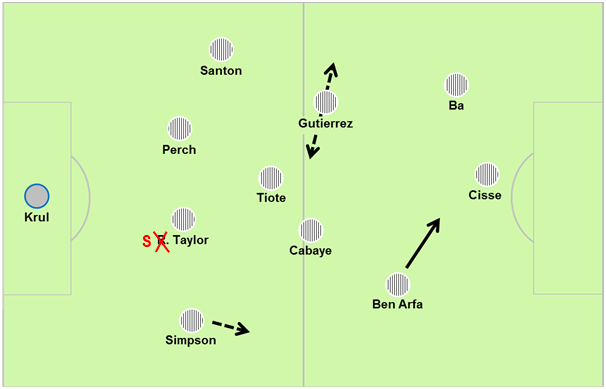 Newcastle looked far more cohesive when playing the 4-3-3 as a result of their greater control of midfield, and it thus seems feasible that this will therefore be the system Pardew will play against Chelsea, especially in light of Newcastle's need to negate Chelsea's attacking threat. If Newcastle does return to the 4-4-2 (although I wouldn't expect them to), then it's three fairly simple modifications: Gutierrez moves into a wider position on the left flank, a greater onus in placed on Ben Arfa to form the second bank of four on the right hand side, and Demba Ba moves to a central position alongside Papiss Cisse, as he prefers.

What's most impressive about Newcastle from a tactical point of view is their flexibility. They showed this by transitioning neatly from the 4-4-2 to the 4-3-3 at the half time interval against Tottenham, and it was a crucial factor in their eventual victory, as Tiote's deeper positioning was vital in stopping Sigurrdson advancing into dangerous positions, while perhaps more obviously (but not necessarily more telling) Demba Ba scored his well taken goal from a left sided position.

Newcastle is also flexible in terms of style. On the whole, Pardew's approach doesn't prioritize possession, but there are certainly games in which they see more of the ball, and rely on clever passes from Cabaye to the centre forwards. There are also games in which they concede the midfield battle, sit back and look to hit sides on the counter attack, prominently through the pace of Ben Arfa on the right wing. I'd expect their game this weekend to follow a similar sort of pattern. They'll be compact, tight in midfield and be dangerous on the break. Chelsea will need to be wary of not allowing them too much space in behind, as Ba and Cisse are clinical enough to finish any chances presented to them on the break. What can we also expect from Newcastle is lots of long, direct balls into the channels for Ba and Cisse to collect. It's not always pretty, but it's effective in bypassing an opponent's midfield.

Another key to Newcastle's flexibility is new signing Vurnon Anita, previously of Ajax, who is versatile enough to play in midfield and either full back position. If he were to be selected, it would be likely be as part of the midfield three. He offers good protection to his full backs and provides a useful outlet to receive the ball in attack.

Chelsea's game plan under Roberto Di Matteo bears a certain resemblance to Newcastle's; although with the technical ability of their attacking band Chelsea possesses the greater creative threat. Against Wigan, we saw Di Matteo negate Wigan's threat from the flanks (more specifically, the wing backs) with Ryan Bertrand giving defensive cover to Ashley Cole. While this was successful in shutting down that side, underpinned by Victor Moses switch of flank in the second half, by contrast it served to highlight the defensive weakness of the right hand side as a result of Juan Mata's ineptitude in defence. This is a problem faced by Pardew as well, as Ben Arfa left Danny Simpson vulnerable to the threat of Gareth Bale, who played high up the pitch more like a forward than in his traditional wing position. Both Chelsea and Newcastle have problems on the right flank, and that could be crucial in a game that will most likely be tight and congested.

With all this in mind, on Saturday I'd be looking at offering Ashley Cole the defensive protection provided by either Ryan Bertrand or Ramires, freeing up Mata and Hazard to interchange on the right hand side as they did against Wigan. Fernando Torres will need to make more threatening runs into the channels, looking to pull Steven Taylor or James Perch out of their central positioning. In midfield, Chelsea will most likely field the Lampard-Mikel partnership, who should avoid pressuring too high on the Newcastle midfielders. This will hopefully draw them out of the position, and because the defensive line isn't particularly quick to close down the gap created, space will open up between the lines. Juan Mata did an excellent job of slipping into this pocket behind Danny Guthrie (who has subsequently left for Reading) in the away fixture last season, and either he or Eden Hazard could do a similar job this time round.