There was much talk of Chelsea's relatively unconvincing performance in the opener against Wigan, and much of it seemed to be the same as after our last game of the past season in Munich. Chelsea won both contests despite being outshot by a good margin in each. That seems to worry some fans, while others seemed less than concerned.

This got me thinking though, is there a correlation between the number of shots a team takes and the number of points that team can expect to gain from a fixture? There were ten fixtures in the opening weekend of Premier League action, so I decided to look at just how shots correlated with points. After the jump you'll find a graph which displays what I've found.

First, a caveat. This is only one week worth of data, so there are certainly sample size issues to deal with here. With that in mind, here's the graph: 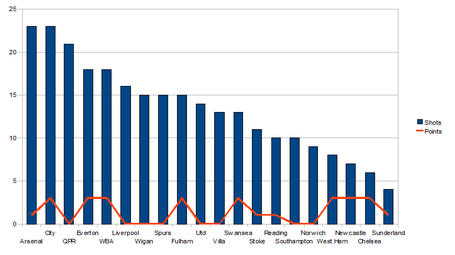 Let's take this a bit further though. What happens if we replace total shots taken with shots on target? It's an easy adjustment, so here's that graph: 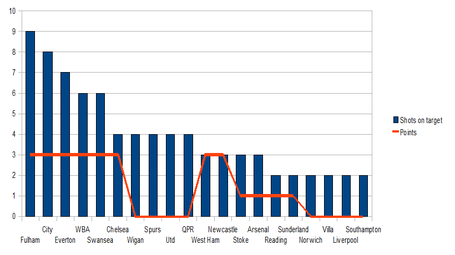 While some fans are a bit alarmed at the number of shots Chelsea allowed on Sunday, They really shouldn't be. As long as the quality of those shots remains generally poor, Chelsea should really encourage their opponents to just shoot away from distance. These shots don't seem to be an issue until they start to reach the keeper with some regularity, and that wasn't a huge issue in the opener.

Sitting deep and counterattacking shouldn't be a huge issue either, as long as Chelsea continue to be efficient when they do get shots. They put 67% of their shots on target this weekend, by far the best rate in the league. Taking more shots would certainly be useful, but not if it comes at the expense of some of the quality they are getting at the moment.

All told, this probably doesn't mean much after a single week of fixtures. It's worth keeping an eye on though, as the "experts" often associate more shots in total with the better team on the day. Statistically speaking, the first week's results just don't back that up.

*Note: This was written and scheduled before the Reading game today, so the results of that game weren't factored into the data. For what it's worth, Chelsea outshot Reading and had more of those shots go on target.