Analyzing the Two Goals against Wigan

Share All sharing options for: Analyzing the Two Goals against Wigan

On the surface, the two goals Chelsea scored against Wigan look very different from each other. For a start, one was scored from open play while the other from a spot-kick. And one scored by a defender, the other by a midfielder. But a closer look reveals that they actually have a lot in common. The two new boys from each team, Eden Hazard and Ivan Ramis, played a crucial role in the build-up to both goals. And both of the goal-scorers, Branislav Ivanovic and Frank Lampard, were involved in the early stages of the build-up and made deep runs from the edge of the Chelsea box into the attacking third. To find out how these two goals were scored and what other similarities they share, hit the jump button. 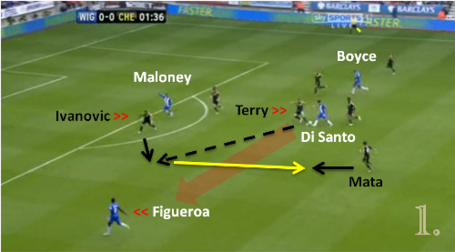 Within a minute after the kick-off, Wigan built a solid attack with Victor Moses and Emmerson Boyce playing a neat one-two on their right. By the time former Chelsea player Franco Di Santo received the ball in the central area, Wigan were in a full blown 3-4-3 attack with both of their wing-backs in advance position on the flanks. Maynor Figueroa on the left was in a great position to receive a lay off, but Di Santo wrongly decided to pull the ball back to turn toward the right. That’s when he ran into John Terry’s challenge and the ball was knocked over to Ivanovic. The Serbian slipped a pass to Juan Mata before galloping forward down Chelsea’s right. The counter attack begins.

Note two things here. First, Ivanovic who would eventually score the goal at the other end started his run from the edge of the Chelsea box (whew! I'm out of breath just writing about it). Second, Wigan may have committed bodies in their attack but they still had central midfielders -- James McArthur and James McCarthy -- shielding their back three in order to hinder Chelsea's break. Mata, Lampard and Hazard would solve this problem next.

Simple geometry: a quick-passing triangle beats a pressing straight line. Mata found Lampard who tapped a first-time pass to Hazard at the center circle. Now here's the tricky part. The Belgian, showing great awareness and skills, made a clever little turn to beat the onrushing Ramis and sped past the defender. At the bottom edge, you can see Ivanovic moving forward; Figueroa, originally a fullback, kept pace with the Serbian up to the point when Hazard turned. 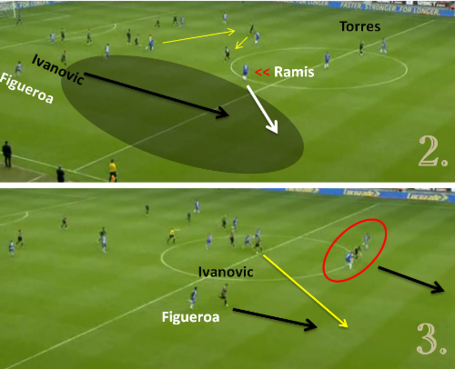 Now let's zoom out for a second and look what just happened from a wider view. Frame 2 of the above picture demonstrates the weakness of an attacking 3-4-3 formation: their flanks are wide open on opposition's counter attack. With Figueroa pushing forward, Ivanovic had a ton of space to run into on that side. But Wigan, at this point, could still have done some damage control. If, for instance, Ramis were to drop back to cover Ivanovic's run instead of committing a challenge (unsuccessfully) on Hazard, Wigan might have a chance at slowing Chelsea's counter attack down -- let the midfielders time to join the defense.

As it was, Hazard skipped past Ramis; the two other Wigan center-backs were distracted by Fernando Torres; and the passing lane toward Ivanovic just opened itself up for Hazard, who made a perfectly timed and weighted pass. Ivanovic was through.

And how about that finish! Composed, yet timely; accurate, yet powerful. Any striker in the world would have been happy with that strike. But what's more, he had covered about 85 yards in the process. The build-up to this goal -- from Ivanovic's first pass to Mata to his goal -- was made up of 4 passes and took 12 seconds to execute. Take a couple of deep breaths before we move on to the next goal. One... Two... Three... Ready? 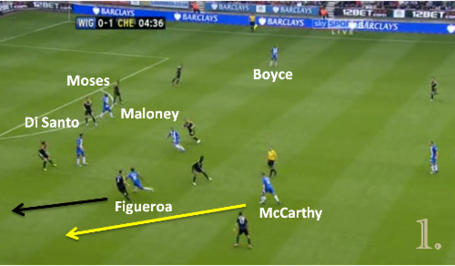 A mere two minutes after the first goal, Wigan were once again mounting an attack, this time from their left side. I have highlighted all the Wigan attackers' names in the above picture to show that they were pushing numbers forward. Seven Chelsea defenders were back to welcome the six Wigan players. McCarthy would find Figueroa on the left and the wing-back would put in a poor cross, which was collected pretty easily by Petr Cech. With this attack, plenty of Wigan players shifted toward the left and the center of the pitch was cleared. Cech was aware of this and would begin Chelsea's move down the center by rolling the ball to Lampard. From this point on, I will put the similarities between the two goals in square brackets like this: [Wigan attack and Chelsea counter].

Lampard was completely unchallenged from the edge of the Chelsea box to the halfway line; at which point, he delivered a great pass with the outside of his foot to Hazard who was on the right wing. [Ball move down the center then pass to right] [Lampard-to-Hazard pass]

The break was on -- Lampard and Torres down the center with Hazard and Mata flying down from right and left wings. 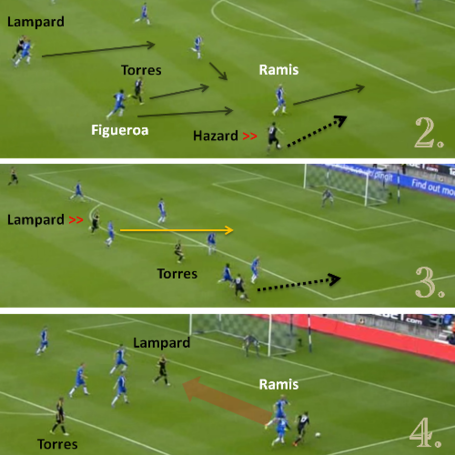 The above picture is there mainly to show you two things. First, Wigan had enough defenders back to deal with this Chelsea attack: it was a 4v6 situation. And Ramis initially made a good decision to wait for Figueroa to come back help out, but then he would unnecessarily lunge into a tackle to give away the penalty.

Secondly, I want to highlight Lampard's movement in frame 2. The Chelsea midfielder had covered about the same distance as Ivanovic did for the first goal and now he was at the D of the Wigan box. As Ramis and Figueroa doubled up on Hazard, Torres checked his run. Lampard, meanwhile, saw that little bit of gap between the Wigan defense and made a diagonal run toward the near post. Nothing really came about from this run but notice that Lampard, in frame 4, was now in a great position to score if Hazard were to have made a low cross to the center. That is one of the main reasons why Frank Lampard is THE goal-scoring midfielder that he is. Great awareness and intelligence. Now on to the penalty itself.

Most penalties are converted/saved/missed depending on three factors -- placement, power and luck. If you can place the ball into certain areas of the goal, it is almost impossible to save a penalty even if it's not hit with power. But sometimes, if you hit it hard enough within the frame of the goal, it will still make it hard to save. This penalty by Lampard didn't have great placement -- it was pretty close to the center. But it was hit with decent power and had enough luck to have slipped under Al Habsi's arms. The penalty, much like the team's overall performance, wasn't great, but it got the job done.

This goal -- from Cech's pass to Ramis foul on Hazard -- took a total of 15 seconds and involved two passes. Roberto di Matteo has said that his team won't make any radical change and that seems to be the case in the way these two goals were scored. Both came from transitions -- soaking up opposition's pressure and hitting them quickly and effectively on counter. Isn't this how we won the Champions League last season (oh by the way, we are champions of Europe!)?