Chelsea won their opener today with a fairly comfortable 2-0 scoreline. Regardless of that fact, many members of the WAGNH community seemed to feel it necessary to get up in arms over the performance. In a trend that's becoming far to common for my liking, many of you immediately singled out John Obi Mikel as the weak link. With that in mind, I'm going to take a look at one of the most common complaints about his game.

Stop me if you've heard this before...John Obi Mikel always passes the ball sideways. Everybody says it, so it must be true. Well, MCFC Analytics has given us access to all of the Opta stats for the 2011/12 Premier League season, so now we can see if this is statistically correct. If you haven't yet read about the project, you can do so here.

For this exercise, I've decided to compare Mikel to some comparable players at the largest clubs in England (and Liverpool). Gareth Barry, Nigel de Jong, Michael Carrick, Alex Song, Oriol Romeu, Scott Parker, Sandro, Cheik Tiote, and Lucas Leiva all seemed to be excellent guys to compare Mikel with, so I decided to crunch some numbers on that group. Opta gives us totals of passing forward, backward, to the left, and to the right for every Premier League player in every Premier League game last season, so i broke out the calculator and went to work. After the jump, you can see what these guys did in this regard.

First, why don't we take a look at the midfielders mentioned above and their tendencies to pass sideways. To make this easier on the eye, I've just totaled the percentages of passes to both the left and right. I've then layed it out in a pretty little graph below: 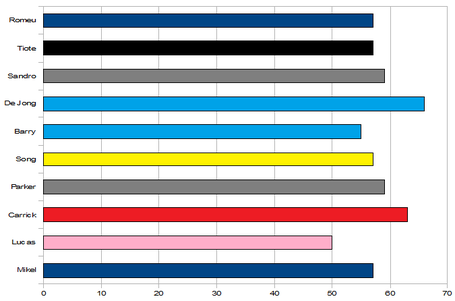 Surprised? I think most of you should be. John Obi Mikel doesn't actually pass the ball sideways more than most of the other defensive mids at top clubs in England. He sits a little below the average in this regard, passing the ball to either side 57% of the time.

I'm sure many of you are now jumping to conclusions, making the assumption that these number just look this way because Mikel actually passes the ball backwards more than the rest of this sample. Well since we're digging through numbers anyway, why not take a look at that as well? 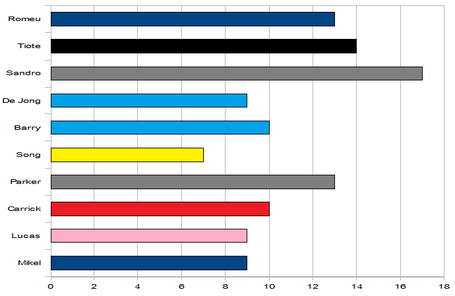 Shocking, isn't it? John Obi Mikel doesn't appear to pass the ball backwards as much as his counterparts do in general. As a matter of fact, he only does so for only 9% of his passes. I guess we'd better go ahead and look at how often he passes the ball in a forward direction... 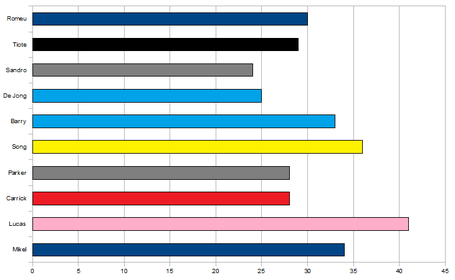 Well there we have it, there were only 2 defensive midfielders at top clubs that actually passed the ball forward at a higher rate than Mikel. One of them is widely considered as the best defensive mid in England, and the other just got purchased by "the best club in the world". This doesn't fit the narrative that many of you have come to adopt, so you should really take some time to let all of this sink in. When somebody complains that Mikel always passes the ball sideways, they are just statistically incorrect. The reality of the situation is that Mikel actually passes the ball forward more than he does in any other direction, with just over 1/3 of his passes sent towards the attack. He also tends to pass the ball forward at a higher rate than most other defensive midfielders in England.

Does this comparison mean that Mikel doesn't have room to improve? Certainly not. What it should tell you wothout a doubt, though, is that John Obi Mikel does not pass the ball sideways more than his counterparts. He actually sprays the ball forward more often than most, and I'm assuming that's a surprise to most of you. There are fair criticisms to be made about John Obi Mikel, but complaining about his tendency to pass the ball backwards or to the side should not be one of them. It's incorrect, and it's not fair to the player. When someone tells you that John Obi Mikel always passes the ball sideways, show them this and let them know that they are wrong.