Share All sharing options for: Pick Your Lineup: Wigan Athletic Vs. Chelsea

So. Chelsea versus Wigan Athletic in the opening match of the season. While we're probably going to see a 4-2-3-1, with our manager being Roberto di Matteo and all, I figured it'd be an interesting exercise to work out who the We Ain't Got No History community would like to see on Sunday -- and in what shape. Wigan's 3-4-3 makes for some fun tactical matchups, and there are a variety of solutions that the Blues might use to overcome them at the DW Stadium.

My thoughts are after the jump, but please do chime in in the comments with yours.

To borrow from Tim's great piece yesterday, here's the sort of lineup I'd expect from Wigan: 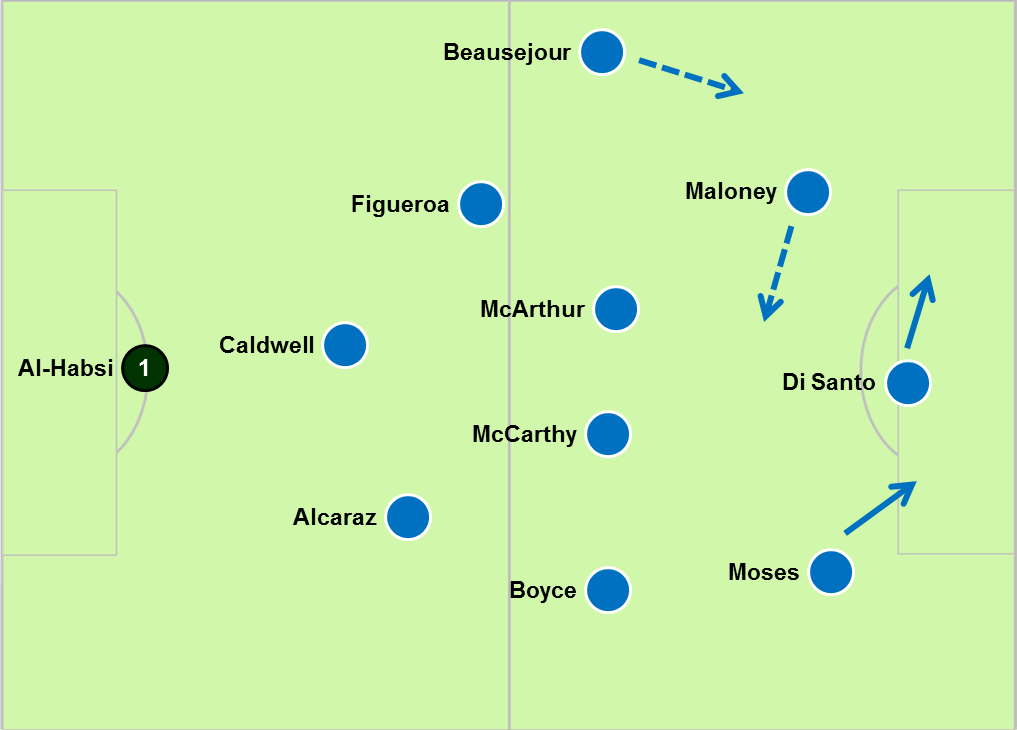 The great issue with a three-man back line is that it has issues with one and three forward systems. Against one forward, there are two defenders sitting around doing nothing, which means that any numerical advantage you get from fielding an extra player elsewhere is gone. Against three one mistake puts an attacking player in, a very dangerous game.

Given that Chelsea are, on paper, better than Wigan across the field, here's how I would respond:

The front three sit on Wigan's three centre backs, with Mata and Hazard then attempting to drift off into space. This will either give us an easy pass to a dangerous player or drag the likes of Maynor Figueroa and Antolin Alcaraz out of position, which we would then hit hard with midfield runners in the form of either Lampard or Ramires. The Hazard-Ramires combination on the right looks particularly promising in that regard.

With Wigan almost certainly employing a zonal marking system, it'll be up to Mata and Hazard to figure out just where defensive responsibility is being handed off to the wingbacks and stay just inside that area. This gives us lots of options -- Torres could end up one on one with Gary Caldwell, Hazard could use his speed to get onto the end of long diagonals, and Ramires can drift through the space left by the centrebacks.

If you're worried about the subsequent problems the Blues would have down the flanks (both in and out of possession), you should be. Using the wide forwards, who aren't very good defensively anyway, to occupy Wigan's centre backs will allow the Latics the freedom to overlap on Chelsea's fullbacks. I don't anticipate this being too problematic, however, for a couple of reasons.

The first is that Wigan are actually at their most dangerous when Victor Moses and Shaun Maloney are cutting inside rather than playing on the flanks. Franco di Santo is not a centre forward that the likes of David Luiz and John Terry should be worrying about on crosses -- what they need to watch for is Moses and Malouney darting between them and the fullbacks for Wigan's McMidfielders to hit them with diagonals.

The second is that I'd fully expect Roberto Martinez to realise that the combination of Torres, Mata and Hazard is going to rip apart Wigan's three defenders and react by pulling Jean Beausajour and Emmerson Boyce into a back five rather than giving the wingbacks license to push forward. At that point I'd tell Mata and Hazard to move centrally, which would give Chelsea a huge advantage in the middle of the part and open up space for the more creative players to operate. We'll probably get a few set pieces this way, and if we can overload the centre it's not out of the question that some Barcelonaesque one-twos could cut through the Latics' back line.

As for the specific players -- using Lampard and Ramires in advanced positions dictates that we use a single holder, and while I think Oriol Romeu's generally a better bet as the base of a midfield three I haven't seen him play in for for essentially forever, so I'm going to trust Mikel there more for the moment. David Luiz plays over Gary Cahill because of his passing range, although if he continues his preseason run of being a moron I might change my mind on that. Oscar doesn't play because he has only been with the team for forty-five seconds.

Anyway, what think y'all?