If there is one thing we have learned from the Community Shield, it is that Chelsea's attack still needs a lot of work. Our third band of attack -- Hazard, Mata and Ramires -- struggled to create while Lampard and Mikel failed to dictate possession. But despite looking second best for the majority of the game and playing with 10 men in the second half, we somehow managed to score TWO goals against the current league champions! How did that happened? Well, let's find out. Hit the jump, Jack! Do it. 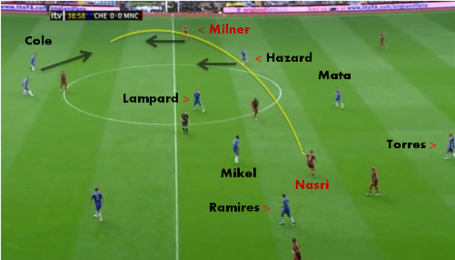 The highlights of the goal will show Ramires' brilliant dribble and Torres' quickly triggered finished, but it was Ashley Cole who made the first important contribution to the goal by intercepting Nasri cross-field pass intended for James Milner. That interception not only started the Chelsea attack but it also prevented a potential 1v1 situation between Cole and Milner since Hazard was still retreating from his advance position.

Before we continue to the next picture, note that Mata, at this point in time, was in a central position while Ramires was wide on the right. This will change as Hazard and Cole combined to move the ball forward from the left flank. 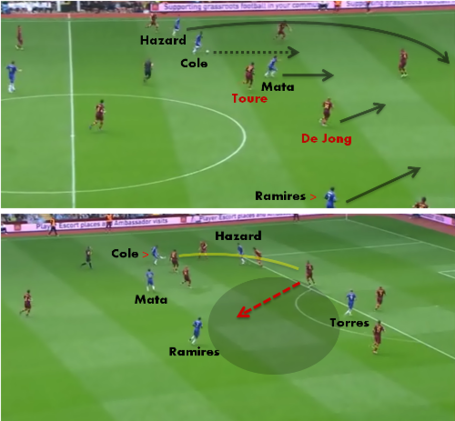 As Cole brought the ball forward, Hazard made an overlap while Mata drifted towards the left in support of Cole. This overload of Cole, Hazard and Mata on the left dragged both Toure and De Jong to that side of the pitch leaving Ramires wide open in font of the box. When we have an overload like this causing imbalance to the opposition's defense, we should be able to quickly deliver the ball to a player in Ramires' position. We weren't able to do this directly.

Cole crossed the ball into the box (probably intended for Torres). When the cross was easily cleared by Kompany, the ball fortunately landed right into Ramires' lap. And this lead to...

Ramires' dribble and pass were pretty awesome, and Torres' instinctive finish put the ball in the back of the net. Both the beginning and the end of the build-up to this goal were positive, but we needed a bit of luck in the middle for it to work. 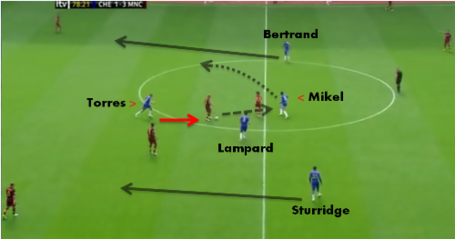 3-1 up against the 10 men of Chelsea, City were knocking the ball about with little urgency. When De Jong hung on to the ball too long at the center circle, Torres sneaked in from behind to tackle the ball off of the Dutch man. The loose ball went straight to Mikel who, with swivel like a ballerina, escaped his nearest maker. And just like that a counter attack was on. As Cole did for the first goal, Torres put in the initial contribution to the build-up of the second goal. 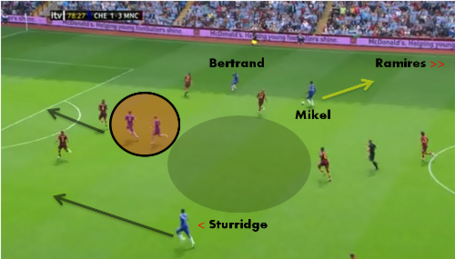 The break came to a halt as quickly as it started when Mikel didn't have any constructive passing options up front. This is mainly because we were missing a player. As Torres and Lampard drove forward making the same run, there was a gap right behind them. A gap which would have been filled by one of our midfielders who would have provided a passing option for Mikel centrally. Of course, either Lampard or Torres could also have checked their run and dropped into that zone, but as it was, the attack was delayed and Mikel ended up choosing the safe option -- oncoming Ramires from the right back position. 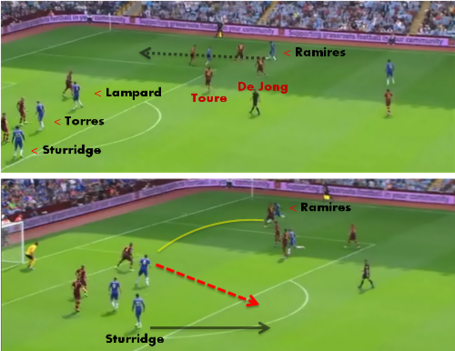 It was no easy task on the wings for Ramires though. With Toure and De Jong shifting to that side of the pitch, the Brazilian had only one attacking option -- beating his marker with speed in order to make a cross into the box where Lampard, Torres and Sturridge stationed. He managed to deliver a cross but it was cleared, once again, by Kompany. Sturridge would drop back to collect the loose ball. 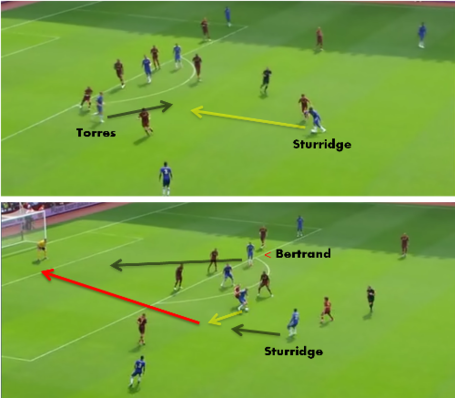 As Sturridge restarted the second wave of attack, Torres did three things right to set up a shooting opportunity for Sturridge. The Spaniard dropped back from his advance position to open himself up, held the ball under pressure and laid it off (as he fell to the ground) for Sturridge to strike from distance. And then...

Full credit to Ryan Bertrand for reacting the fastest out of everyone to pounce on the loose ball (and for trying to pry the ball out of the big bad bully goalkeeper's grasp).

I've learned a couple of things from breaking these two goal down like this. (1) We started play on both goals by making smart interception. (2) But we needed a few sprinkles of luck in the final third in the build-up of both goals. (3) Both Torres and Ramires did some good things in both of these goals. Okay, I'm out!