Every once in a while, I will see something in the comments section that just makes me scratch my head. Last season that was the general hatred of both Salomon Kalou and John Obi Mikel, and today's initial reaction thread right after the Community Shield loss seemed to be a fresh place to vent our frustrations with Mikel. In fairness, John Obi wasn't very good today. Many comments lately have seemed to dismiss him entirely though, seeming to believe that his solid performances versus Barca and Bayern Munich last year were more the exception than the rule. There were far too many of those today for my liking, so I decided to have a little fun.

In general, it's very difficult to judge the performance of many deeper lying midfielders, as they're just never going to tally many goals or assists (unless they happen to be the primary penalty taker). They aren't going to be directly responsible for too many goals allowed either, as there is another line of defense behind them. If you're skeptical of some of the whoscored type rankings (and I'm certainly skeptical of how they are calculated), then all that's left to do is to break down their performances with the naked eye. There's very little flashiness about the position, so even that can be a bit difficult.

With that in mind, I decided to take a very simple approach to statistically examining the impact of Mikel. I simply looked at all of the times he was chosen as a starter, and then looked at the results the team had in those starts. I decided to ignore substitute appearances for this exercise, as they tend to include some 5-10 minute runs in which the player makes little to no impact. Looking at Mikel by himself doesn't tell us much, but it becomes interesting if you start to compare how the club did when Mikel started to the same type of data with every other player on the roster. Hit the jump to see what I found.

First, a caveat. The following tables don't measure the impact of a single player, but rather look at how the team fared as a whole when that player was named to the starting 11. Players can have poor performances in wins, and great performances in losses. It happens all the time. None of this data takes any of that into account, it just looks specifically at what the result of the game were when each individual player started.

Secondly, I wanted to set a minimum number of starts that we'd be looking at. I decided to ignore players with less than 10 starts on the season, as frankly the sample was just so small that I'd expect it to mean very little. That's not to say that players with more than 10 starts have a truly meaningful sample size, but you have to set the minimum somewhere. Ten starts seemed to be a nice place to do so, and 19 players fit that bill.

As far as the data itself goes, first I wanted to look at what percentage of each player's starts that Chelsea won. This was pretty easy to calculate, as I simply divided the number of victories from each player's total starts. The graph below will let you all see exactly how often those 19 players were on the winning side when they were on the pitch: 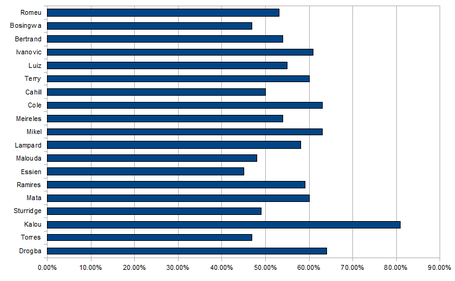 Interesting, no? Salomon Kalou ran away from the field here, and John Obi Mikel, Branislav Ivanovic, Didier Drogba, and Ashley Cole led the rest of the squad. We all know that wins are great, but draws aren't terrible either. So up next, I looked at exactly how many points per game the team averaged for every game that each of those 19 players started*. Those results can be found below:

*For this part of the exercise, I assigned point values to cup games as well. 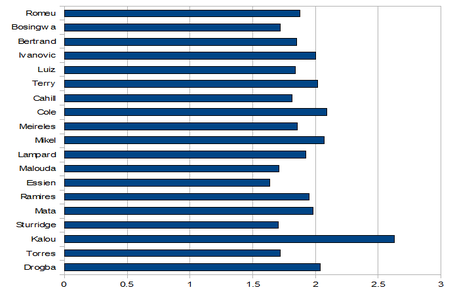 Again, this is interesting. There was only 1 player on the Chelsea roster that was not part of a loss for the club last season, and that was the under-appreciated and now departed Salomon Kalou. Thirteen wins and 3 draws is a pretty solid set of results in his starts, so kudos to Salomon. The equally unpopular John Obi Mikel was also a player who averaged at least 2 points earned in each of his starts, along with Branislav Ivanovic, John Terry, Didier Drogba, and Ashley Cole. Juan Mata and Ramires both barely missed the 2 ppg average, at 1.98 and 1.95 respectively. I doubt anyone out there would have guessed that Mikel would top both of these categories as far as Chelsea's midfielders were concerned, and he did it by a fair margin.

All told, this probably doesn't mean that much in terms of evaluating individual performances. It's interesting none the less though, as it does tell us which players were on the pitch most frequently last season when the results went Chelsea's way. I'm sure many of you were surprised to find out that when Mikel and Kalou were on the pitch, Chelsea tended to have better results than when they were on the bench. Mikel may not be the flashiest player Chelsea have ever had, but when he plays the club tends to get better results than they do when he doesn't. For a player that just turned 25 at the end of last season playing for the defending Champions of Europe, that's an awfully good thing to be able to say.