On Chelsea FC, FFP, and amortization of transfer fees

Share All sharing options for: On Chelsea FC, FFP, and amortization of transfer fees

FFP is quickly coming closer to becoming reality. Chelsea just keep on spending in the transfer market. Because of the combination of these 2 things, many have reached the conclusion that Chelsea could be in trouble when UEFA decide to look closely at the books. There are quite a few misconceptions out there about how the rule actually works*, so today we're going to take a closer look at 1 aspect of this rule and how it will look when applied to Chelsea FC.

*For anyone interested, the entire 85 page document can be found here

Today we're going to look specifically at transfer fees and how they'll be accounted for under FFP. The rule as designed by UEFA allows clubs 2 alternatives in how to report transfer fees. The first method would be to simply record all transfer fees as expenses, which is the easiest way to report figures. When you buy a player, you would simply record the fee as a 1 time expense. When you sell a player, the fee would be a 1 time credit. Loss or profit would become a simple matter of subtracting sales from purchases and looking at the total. After the jump I've laid out what Chelsea's first 3 year monitoring period would look like using that specific method.

Two things to note here. First, all figures displayed are in millions and have been rounded. Second, I don't have access to the specifics of all sales and purchases, so these figures reflect the most educated estimates we have. The data may be off by a few million pounds in either direction, but overall you get a pretty good idea of where we stand by looking at the chart below. 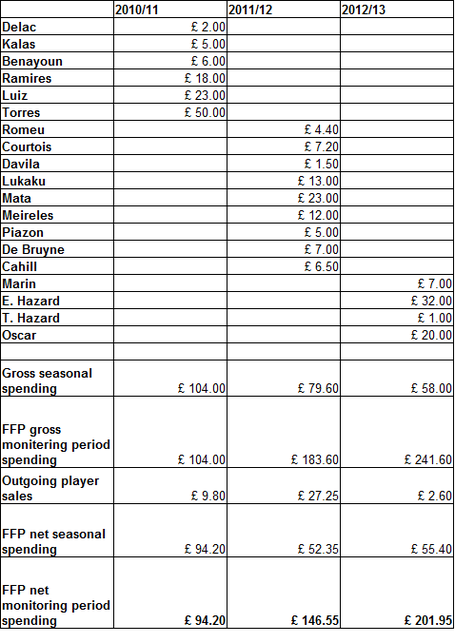 The expensing method has it's good and bad points, but my guess is that basically nobody will show their accounting using this method. Writing off transfer fees as a 1 time expense creates wild variances in profit and loss. While this method would allow for quick fixes to large losses by selling players, it would also make it very difficult to consistently break even. Clubs using this method would likely show seasons of large profit and large loss at varying points of their accounting, and that would seem to make consistent compliance with FFP far more difficult. Because of that fact, I think it's safe to assume that Chelsea and every other club out there will take the other option that UEFA is offering, amortizing transfer costs*.

*Clubs can't swap between methods from 1 season to the next, they have to report using the same methods every season.

By amortizing transfer fees, UEFA is allowing clubs to spread the cost of the purchase over the life of the contract. As a simple example, a player purchased for £10 million and signed to a 5 year deal would have his transfer fee spread out over the 5 years he was under contract. That's £2 million per year, nice and simple.

What happens if a player extends though? We'll use the above £10 million player as our example again. That player finishes the second year of his contract with the club, and the club and player reach an agreement that extends the contract for 2 more seasons. At that point we take the £6 million that has yet to be accounted for in the books ( £4 million has already been accounted for in years 1 and 2) and split that up over the 5 years the players is now contracted to the club. This player will now cost £1.2 million against FFP for the remainder of his contract. If he extends again, you'd simply repeat that process using whatever amount is yet to be accounted for.

Below you can find the chart of how Chelsea's transfer spending would look under the amortization method of FFP accounting. You'll note that both Ramires and David Luiz extended this season, and their transfer costs counted against the books this year have dropped accordingly. 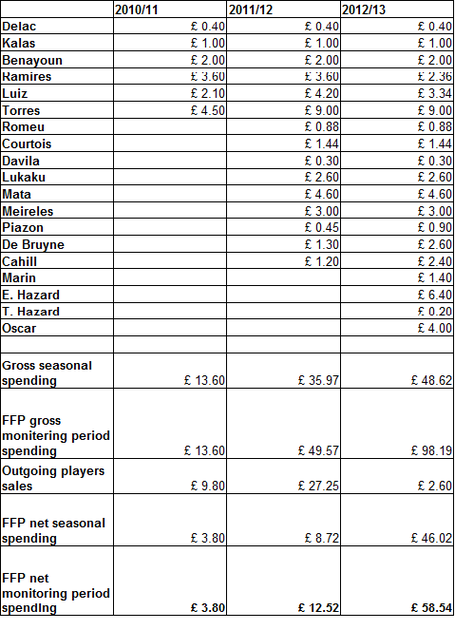 That looks a lot better, no? Using the amortization method of accounting, there is basically no chance that Chelsea fail to comply during the initial accounting periods of FFP. I've used exactly the same figures for transfer fees, but simply broken them down over the life of the contract. Using the amortization method, Chelsea are showing about £163 million less that they've spent in transfer fees for the first accounting period. This brings up an interesting dilemma though, as how do we account for player sales using this method.

First, there are 2 types of player sales. Academy products don't have transfer fees to account for, so they are very easy to show. Simply take whatever you received for the player in question and add it to your income. Players signed prior to 2010 are being accounted using this method as well, although there likely won't be significant fees from those players going forward.

What if we sold a guy that counts against FFP though? What do you do with the portion of their transfer fee still to be accounted for? It's fairly simple actually, but it does take a little math. Let's use Yossi Benayoun in this example, as he's likely to be sold this summer anyway. Let's say we sell Yossi for £1 million. We had Yossi on the books for £2 million this season. We'd take that total, subtract the £1 million from the sale, and Yossi would cost £1 million against the books this season.

So what if the player we sell is not in the last year of their deal? For this example we'll look at Fernando Torres. Torres through his first season and a half has seen £13.5 million go against the books. He's got 4 years and £36.5 million left to account for. Let's say we manged to sell Torres for £20 million tomorrow. How would we account for that? Well, we'd take all of the £36.5 million still owed to Torres, subtract the £20 million we just got for him, and record the £16.5 million as a 1 time loss for the 2012/13 season. Torres would never again count against the FFP books, we'd take the 1 time hit and move on.

This math would work for profits as well. If we take the same player (Torres) and sell him for the same £50 million we initially paid for him, the accounting works the same. We'd take the £36.5 million still needing to be accounted for on the books, subtract the £50 million we just sold the player for, and put the resulting £13.5 million in profit towards 2012/13. It's a 1 time profit, and Torres would disappear from the books entirely after the 2012/13 season.

This method of accounting for player sales helps to highlight the genius of what Chelsea are currently doing. We've spent a lot of money thus far this summer, no question about it. But using a player for 4-5 seasons and then selling him at a high point of his value is going to cut out a massive portion of our amortized transfer spending. Buying assets with resale value will literally allow Chelsea to continue spending on the transfer market in the future, buying guys like Luka Modric, Hulk, and Cavani just won't. Selling just 1 or 2 players for £15 million apiece can fund a pretty massive spending spree in the short term, as the sale of Yuri Zhirkov is enough to offset this season's amortized hit of every single player we've bought in the last 2 transfer windows combined. Buying young and selling off the surplus later will help Chelsea remain compliant, as it's actually a sustainable model.

In the long run, complying with FFP will really come down to our ability to make smart decisions in the transfer market. Clubs can spend a lot of money as long as they make a lot of money as well, and having assets to sell that will help make up the difference will be important. There isn't a set amount of money that the club can spend this offseason, but the more they do, the more they will have to either make or save in the future. Using the amortization model of FFP accounting stresses the importance of making smart purchases, regardless of the initial cost of those buys.

Transfer fees are also only 1 factor in FFP, albeit a very important factor. Player wages are equally expensive in general, so those will also be a factor when UEFA looks at the books. As far as transfer fees are concerned though, Chelsea really aren't in a situation in which they really need to be worried about running afoul of UEFA in the near future. The English media may not care to do the math required to understand the situation, but it's really not all that dire. Clubs that buy smart will be able to spend big, we just have to avoid the Fernando Torres and Stuart Downing purchases of the world and we'll be ok going forward. Buy young, buy upside, and build a strong academy. Do all of those, and FFP will not be an issue.