Some thoughts on Oscar vs Belarus

Share All sharing options for: Some thoughts on Oscar vs Belarus

In the Olympics, Oscar and Brazil took on Belarus in the second game of Group C. Despite their dominance from the kick off, Brazil fell behind to a surprise Belarus goal inside nine minutes. However, a much improved second half performance saw Brazil come away with a 3-1 win; Oscar score the third goal in the 90+ minutes.

This was a pretty challenging game for both Oscar and Brazil because Belarus parked the bus with 3 central defenders shielding the back five for the majority of the game. Brazil found it hard to find space in advance areas. But we saw the new Chelsea singing signing play a number of different positions in this game as Brazil slowly broke down a staunch defense. 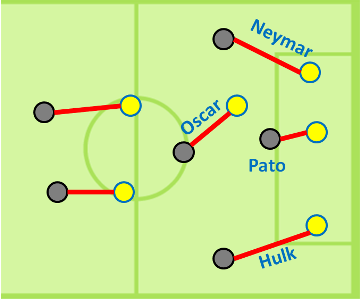 Brazil started the game with an attacking 4-2-3-1 shape. But unlike the opening game against Egpyt, Oscar started behind Pato while Hulk and Neymar flanked him right and left respectively. Inside the opening 20 minutes, Oscar often drifted towards the left to link with Neymar and Marcelo. There were some attempts from the 20-year-old to create from around the edge of the box but the two defensive blocks of Belarus proved too strong and there were very little space to operate centrally. On a couple of occasions, Oscar made uncharacteristic unforced errors. But to be fair, the whole Brazil team had a difficult first half.

Even though they struggled to create chances,we should also note how fluid the 3rd band of Brazil's attack was in this half. Hulk, Oscar and Neymar switched around pretty frequently after the first 20 minutes without really losing the tempo or quality. In that 45 minutes, Oscar played all three positions -- left, center and right -- in that three-men attacking line. 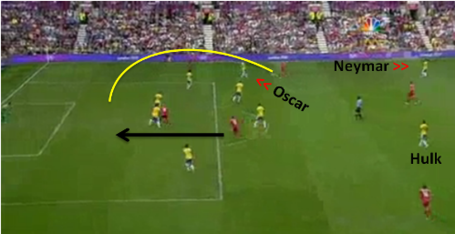 Oscar was partly responsible for the Belarus goal. As the team in red broke down Brazil's left, Oscar found himself covering Marcelo on that flank. First of all, Neymar was playing dominantly on the left; so Oscar should get the credit for doing Neymar's job of tracking back on that flank. However, once he's in that position, he should have done better at pressing the Belarus player, whose cross was headed in for the goal. Sure, the Brazilian defense (including the keeper) might have done a lot better but Oscar should shoulder some responsibility for the goal.

With the Belarus wall standing firm in front of the goal, Brazil, at times, were restricted to making long crosses into the box (that's how they scored the first goal) and shooting from outside the box. Oscar got a couple of opportunities to strike from distance and he didn't hesitate. His shots in general had power and precision. When he missed, it wasn't too far off. His first instinct is to pass, to create, but he's not shy to test the keeper. I wouldn't be surprise to see him score from long range in these Olympic games. 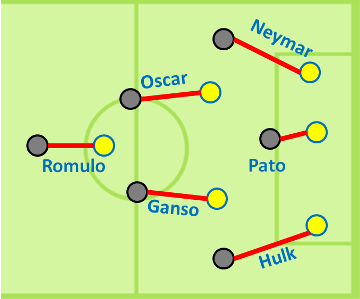 In order to find a winner, Brazil brought on Ganso for Sandro and made a tactical switch to a 4-3-3. Romulo became the lone holding midfielder with Oscar and Ganso ahead, forming an inverted triangle. This change made sense: Belarus were defending too deep and a double pivot was redundant for Brazil. With both Oscar and Ganso pushing forward, Brazil now had 5 attacking players instead of 4. Neymar scored soon after from a freekick and Brazil looked much better in terms of attack. The movements were faster and they used the little space that they had much wiser. 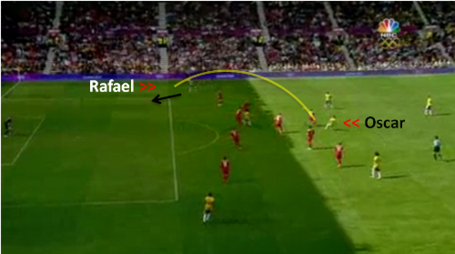 First, this is yet another example of Oscar's flexibility positionally. As a left mid, Oscar showed great understanding with Neymar and Marcelo. Second, this, of course, is a typical Lampard position in a 4-3-3 and Graham has already pointed out that this could be his long term position for Chelsea. His passing ability, positional awareness, attacking mentality and his willingness to shoot meant that it is not unreasonable to make that case. The bottom line is that he showed his versatility in this game, which will be of great use for Chelsea. And, of course, when Brazil made the final switch at the 86 minute back to 4-2-3-1, Oscar moved back to the left wing role and scored with a calm finish when Neymar set him up with cheeky back pass assist.

Two games down in the Olympics and Oscar is on 1 goal and 2 assist. He is proving himself to be a great buy for Chelsea. It was also a fantastic piece of business to have signed him before the Olympics because you know his value is rising game by game.