Oscar To Get #11 Shirt At Chelsea?

Share All sharing options for: Oscar To Get #11 Shirt At Chelsea?

Don't you just love it when people give things away before they're supposed to? That's exactly what the Chelsea Megastore did today, giving away Oscar's shirt number before it's been officially announced by putting his kit on sale on the site. They've yanked the image already, but they couldn't quite delete all of the evidence: 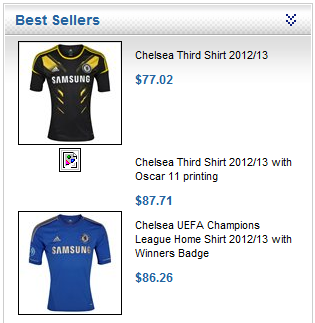 See the middle option? Yep, that's right -- 'Oscar 11 printing'. There'd been a lot of speculation about who'd get Didier Drogba's number after the centre forward left for Shanghai Shenhua, and now it looks like that slot's been filled. It's an interesting call and one which may make some Blues fans fairly unhappy.

I'd be pretty confident that this was a genuine leak and a mistake (and I pity the poor person who did it), but this doesn't mean that Oscar will actually end up with the number 11 kit. It does seem fairly likely at this point, but it wouldn't be totally out of the question for Chelsea to change it now that this has gone out to the world.