The Merits of Movement

Share All sharing options for: The Merits of Movement

After two tune-up fixtures on opposite coasts of the continental United States, Chelsea are bunkered down in the city of brotherly love for a Wednesday evening showcase against the MLS All Stars. Fernando Torres has rejoined the squad, along with Raul Meireles, leaving our only outstanding players the Spanish duo of Juan Mata and Oriol Romeu. There have been flashes of brilliance, mired by a general lack of sharpness and fitness. At moments, we appear to transition from defense to attack in seconds, at others, we plod from side to side. Clearly, there's work to be done. But after having an easy outing in Seattle, Chelsea faced a much-improved PSG side that offered more defensive resistance than previously anticipated. The result, a very labored 1-1 draw. More, after the jump: 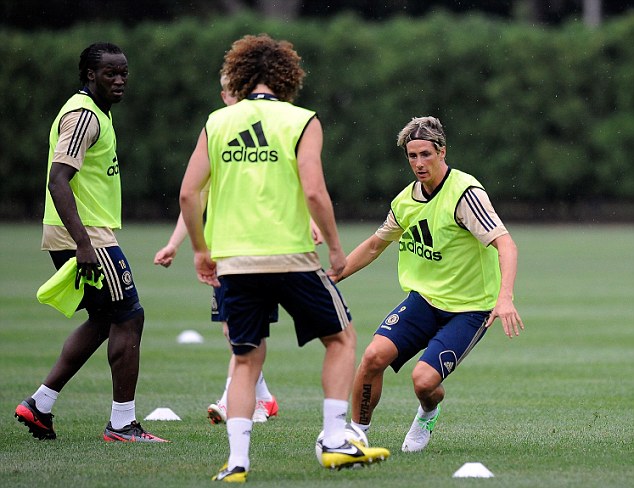 Fernando and the Giant

If you had to grade our collective performance thus far it would land somewhere in the realm of C+/B-. Neither good nor bad, but certainly indicative of rustiness coupled with fleeting moments of brilliance. Individual players have impressed with a selection of skills (see: Hazard, Marin) while others have been slightly disappointing. Still, I believe Roberto and the wrecking crew can be pleased thus far with what's on offer. With Fernando joining the squad it presents the very real prospect of an alternative to the Lucas Piazon masquerading as a false nine up top. Here's hoping his presence can impact Romelu Lukaku, who's performance against PSG can only be described as poor.

With regards to the PSG match, if you watched, you can summarize it better than I can. I spent the first 45 minutes with one eye on the match, the other on Skype. The second interval? Yeah, much the same, but I did make time to watch the final 15 minutes, including Lucas Piazon's well-taken goal. Tremendous moment for him, but lets not get carried away. I distinctly remember being in Dallas several years ago when a certain Franco Di Santo scored a poacher's goal against Club America. So yeah, happy as ever for the kid, but tempering my expectations to say the least. (Editors Note: I got burned severely on the Di Santo flame-out. The Doc can attest to this, I went so far as to buy a kit, which permanently resides in the back of my closet).

Piazon is, by all accounts, a decidedly different player. I was impressed by his movement and reading of the game in the final third, and could anticipate him evolving into an Inzaghi-type goal scorer in the future. With our offense presently over-loaded with playmakers that can fill the 'hole' (Hazard, Mata, Oscar, Marin, De Bruyne, Lampard) it would be prudent to develop Piazon in an alternative direction- perhaps as a striker? His inclusion in the first team is something that has many of us excited, but we shouldn't get particularly carried away with joy just yet. Let Roberto spell it out for you:

'He is still a young boy but he has been very impressive in training and in these friendly games. Playing up front as the striker is not his natural position, but in these two games he did very well and he scored a very good goal tonight. He is certainly one to watch for the future.' - RDM

Some other observations from Sunday evenings PSG fixture:

There's more to say, certainly, but we have a preview for tomorrow that needs to go live shortly. So sit tight and more will follow. Carefree.