Chelsea FC's pre-season and setting up the counter attack

Share All sharing options for: Chelsea FC's pre-season and setting up the counter attack

Chelsea have now played the first 2 of their preseason games. They've scored 5 goals. All 5 goals have something in common...they've all been a direct result of the counter attack. Chelsea have spent the early portion of the summer adding creative talent, yet they've not yet managed to score a goal where they've been in possession for more than 7 seconds or linked more than 3 passes together in the extremely short buildup. Surprised? You won't be if you watch closely how Chelsea have been approaching things on the defensive side of the ball.

One of the big questions with the type of players Chelsea have been targeting over the summer is how the club would fit them all on the pitch. Most are exceptional on the ball, quick, and generally hard working. At the same time, none of the players Chelsea have brought in yet have looked to be fantastic defenders in the past. There has been all sorts of guessing over how Roberto Di Matteo would approach things tactically to suit these players, and the first 2 games of the preseason have given us a fantastic look at how he may intend to approach things on the defensive end. After the jump I'll have a few stills for you to illustrate what Chelsea appear to be doing.

First, look at the following screen. PSG have just taken possession of the ball and are about to begin their buildup. 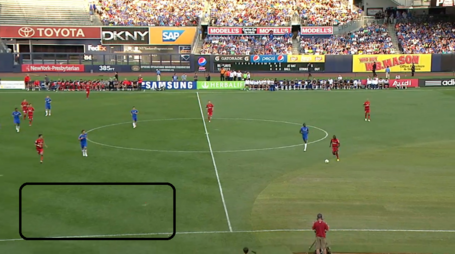 Note the passing lanes. Chelsea have left a very easy and obvious pass for the defender, but more interestingly they've positioned themselves to make it the only available option. Romelu Lukaku is casually following the defender with the ball, in doing so taking away a passing lane. Every other Chelsea player in this screen is doing the same. Chelsea seem to be forcing the ball wide here, and in the 2 friendlies so far it hasn't been an unusual occurence. Take a look at the very next time PSG gained possession in the back: 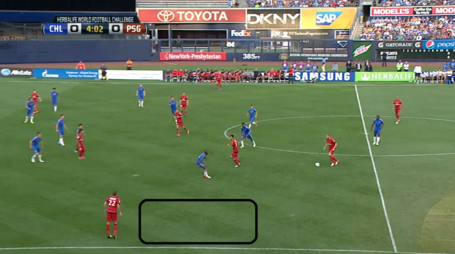 Again, Chelsea are closing down passing lanes everywhere and leaving a simple pass to the wing. There's only 1 good option for PSG, so it's very easy for Chelsea to anticipate where the ball is going next. So what exactly are Chelsea doing when they force the ball wide? Have a look at the following screen: 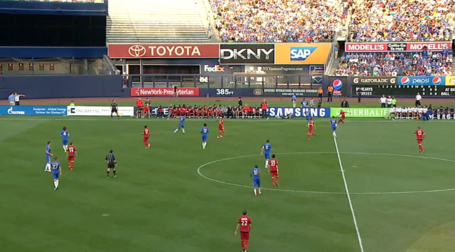 Sam Hutchinson and Gael Kakuta are our players on the right flank. The player on the sideline is just receiving the ball. Look how narrow they've already come. Romelu Lukaku is the only Chelsea outfield player you can't see, and he's just off screen forcing on the left hand side of the field (he was forcing the pass to the wing). Chelsea have now managed to trap the ball on the sideline, limiting what PSG can do. They've also put PSG in a position where they will need to pass to a marked player, suiting the less than world class defenders they have on the pitch.

The next screen will be just seconds into the second half. Just due to the camera being on 1 side of the pitch, I needed to wait until the second half began to get a good screen of the left side of our defense doing the same thing. You can see all 10 outfield players clearly in this one: 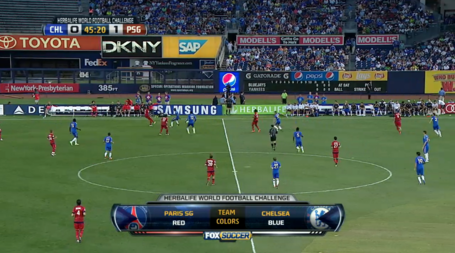 Again, look how narrow Chelsea have become as soon as they forced the ball to the sideline. Marko Marin and Paulo Ferriera are covering the left flank, and they've collapsed to cut off balls to the central players. Chelsea have been making an effort to force the ball wide, limit passing lanes, and force the other team into a mistake. I illustrated exactly how they are capitalizing on those mistakes yesterday.

It's only been 2 preseason games thus far, but this will be an interesting trend to watch for tomorrow as Chelsea take on the MLS All Stars. By narrowing the field in the manner they are, Chelsea are playing to the strengths of players like Eden Hazard, Juan Mata, Oscar, and Marko Marin that are all extremely gifted with the ball at their feet and quick enough to jump a passing lane. They are lessening the need for a "deep lying playmaker" in the process. They're also leaving their center forward in a position to quickly run into space following a turnover, something that would ideally suit a certain Spaniard that's been disappointing since joining Chelsea.

Make of it what you will, but I think we're getting a very early look at how Roberto Di Matteo wants to structure his defensive setup. Force the ball wide, close down passing lanes, strike quickly on the counter. If this is the case, Chelsea could be vulnerable to teams that do an excellent job of switching flanks (United come to mind), but in general it should be an awfully fun system to watch. It's something to keep an eye on for the rest of the pre-season for certain, and luckily we won't have to wait too much longer as there is a game tomorrow.