Defending from the front and Piazon's goal

Share All sharing options for: Defending from the front and Piazon's goal

1Last season we won the Champions League (Yay!). One of the most important steps in doing so was the 2 legged victory over Barcelona which saw us net 3 times on the counter attack. Last night was no different, as Chelsea managed to again find the back of the net with a lethal counter attack. That counter started right at the top, and I've broken it down in a few screens for you to illustrate the total team effort involved with Chelsea leveling. I've placed a number by each Chelsea player and will describe what their role should be in this situation in an effort to take the ball back. 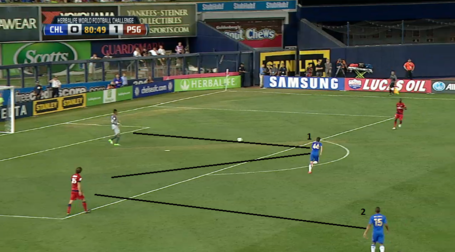 The keeper here is playing the ball out to the center back.

1) Lucas Piazon needs to move in a position to make a pass back to the keeper or to the other center back more difficult. In theory this should force the ball wide. 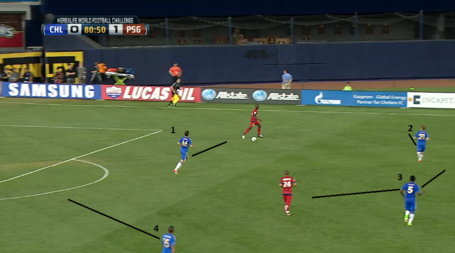 1) Continue to trail the center back and assure that he's got a difficult pass to the keeper. Be ready to provide an outlet should the opportunity arise.

2) Leave an outlet to force the ball wide and then be in position to close down any passing lanes.

3) Be aware of both potential outlets for PSG and in a position to close down passing lanes should they receive the ball (Javier Pastre is lurking just off screen).

4) Continue to be ready for the ball to be switched while maintaining enough depth to get back. 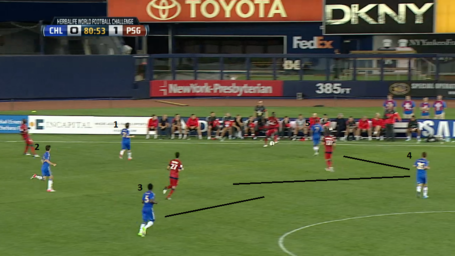 We've successfully forced the ball to the sideline, limiting what PSG can do. Now it's time to force an error.

1) Close down the return passing lane and be prepared to close down any backwards passes for Javier Pastore should he get the ball. Ramires is in great defensive position, so be ready for a turnover.

2) If the ball is played to Pastore, force him forward. If PSG make a poor pass, provide an outlet.

3) Now that the ball has been played forward, Michael needs to be marking Pastore more tightly. 3 years ago, Essien would have already covered half of this ground.

4) Be in position to cover should either of the PSG players I've linked him to get the ball.

5) Stay in the current passing lane and pressure the ball. 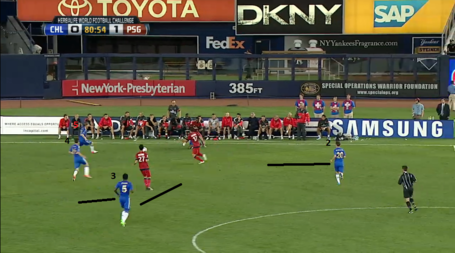 Ramires does his job perfectly and tackles the ball away from the PSG player. I had to use a red #5 for Marko Marin here due to the black PSG warmups.

1) This is Ramires if you can't see the number. He's tackled the ball away and it's heading towards Marko Marin. Get up, run forward, and stay wide.

2) Josh just needs to provide a safe outlet for anyone who recovers the ball and stay in position to mark a PSG player should they get it back.

3) Essien needs to decide if Chelsea are going to recover or not. If they are, he needs to make a run towards the center of the box. If they aren't, he needs to place himself in position to take Pastore out of the play.

4) Lucas Piazon needs to give Marko Marin an easy pass when he gets to the ball so he doesn't need to take the safe route.

5) Recover the ball and move it as quickly as possible. 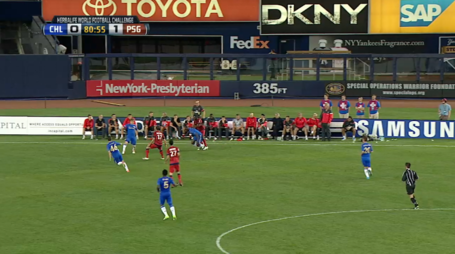 Marin sees Piazon and led him perfectly, Ramires is being Ramires and running a billion miles an hour, Essien recognized the counter, and the break is on. Marin and McEachran now drop in to provide outlets if the counter stalls and we're off and running with an effective plan B. Ramires and Piazon eventually linked up for the goal, but the entire Chelsea front 6 were in excellent position to help transition to offense should the counter have been slowed down. All in all this was an excellent goal which came directly from excellent defensive positioning by Lucas Piazon and Marko Marin leaving us in perfect position to strike quickly. Well done.