In the comments of my previous post on how Chelsea's Premier League squad might look next season, people were (understandably) curious of where we stand with the more convoluted and, ultimately, more restrictive rules that UEFA will impose for the Champions League. I've never been one to shy away from a challenge, so I've taken a stroll through the forest of UEFA regulations with the hope of shedding some light on a fairly ridiculous piece of bureaucracy.

Unlike with the Premier League, all players must be registered with UEFA regardless of age, and there are two different categories of eligibility (helpfully designated List A and List B).

Here's how the official UEFA regulations describe List A:

No club may have more than 25 players on List A during the season. As a minimum, eight places are reserved exclusively for "locally trained players" and no club may have more than four "association-trained players" listed on these eight places on List A. List A must specify at least eight players who qualify as being "locally trained", as well as whether they are "club-trained" or "association-trained".

It's basically the same as the setup as in the Premier League - we get to register 25 players and only 17 of them can be non-homegrown. Unlike the PL, UEFA separate the 'homegrown' designation into two categories, 'association-trained' and 'club trained'. An 'association-trained' player is pretty much the same as the homegrown rules we're all familiar with from the Premier League. A 'club-trained' player is defined as follows:

List B, on the other hand, does not have a maximum number of players. Unfortunately, the eligibility requirements mean that this is much less useful than it sounds. To be eligible for inclusion on List B, a player must:

With all of the needlessly complicated specifics out of the way, I'm sure you're all wondering how these rules apply to our current players. Well look no further, I have a handy table to help you out: 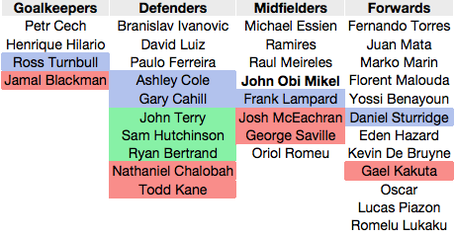 You may well have noticed that this is much less okay than our Premier League squad. We only have 3 club-trained players, which limits our maximum possible List A size to 24 players. We then have 25 players for the remaining 21 spaces. Clearly this is a problem and one that will only be compounded by any further signings during this window. It's a shame that Hutchinson isn't very good, because we could really do with our club-trained players actually contributing.

Note 2: Neither is Ryan Bertrand. Maybe we shouldn't send Lukaku out on loan after all. Hmmm.

And now we've reached the audience participation section that I like to call "John Obi Mikel, club-trained? Maybe, but I can't figure it out for sure" (feel free to suggest a snappier name). The official rules define the 3 "entire seasons" needed to become a club-trained player as "a period starting with the first official match of the relevant national championship and ending with the last official match of that relevant national championship".

Mikel played his first game for Chelsea on September 12th 2006. If his transfer was complete before the first league game of that season then he will qualify as club trained, but because of all of the messing around involved in his transfer I can't find a definitive transfer date to know whether he met the deadline or not. If anyone's got more information on this, then please share it in the comments.

So yeah, that's pretty much all of the information that UEFA have given us about their rules and how they apply to our players. Hopefully this is actually of use to somebody :-)