As most of you will already be aware, Chelsea must name a squad of up to 25 players over the age of 21 that will be eligible to participate in Premier League matches from next season. To further complicate matters, the club may only name a maximum of 17 players that do not qualify as 'home grown'.

It's easy to look at potential transfers purely in terms of their transfer fees and what they will offer on the pitch, but it is important to remember where they will fit into our (rather large) squad.

With that out of the way, I'd like to recap exactly what the rules are and then have a look at where we stand at this point in the transfer window.

1) All Premier League clubs must submit a squad of up to 25 players.

2) Each 25-man squad must include at least eight 'home-grown' players.

3) A home grown player is defined as one who, irrespective of his nationality or age, has been registered with any club affiliated to the Football Association or the Welsh Football Association for a period, continuous or not, of three entire seasons or 36 months prior to his 21st birthday (or the end of the season during which he turns 21).

4) In addition to the 25-man named squad, clubs can use an unlimited number of players aged 21 or under. An Under 21 player is defined as one who is under the age of 21 on 1st January in the year in which the season commences. For the 2012/13 campaign Under 21 players will have been born on or after 1st January 1991.

Because I liked the way that Graham illustrated this back in January, I've decided to use the same idea. The table below shows all of the senior Chelsea players, as well as some of the youth players that have travelled with the team on the preseason tour. The players highlighted in green count as home grown, those highlighted in blue count as U21. 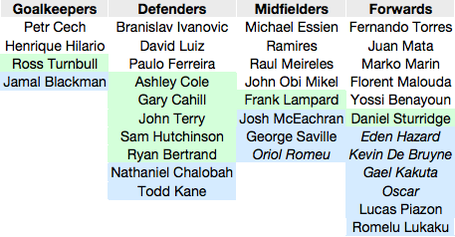 Hopefully you will see that, at this moment in time, we're in pretty good shape. We have 22 players that count towards our named squad and eight of them are home grown. The result of this is that we can, in theory, sign three more players of any age or nationality without consequence.

Unfortunately, it's not quite as simple as that. Hazard, De Bruyne and Kakuta are all currently 21 years of age, but because the cutoff is the first of January and not the beginning of the season, they will not take up a roster spot this season. They will, however, each need a roster spot next season (assuming they are still here) and so will Oscar and Romeu; they both turn 21 in September. In addition, none of these players will count as home grown*.

*Edit by Steve...Gael Kakuta will qualify as homegrown by FA standards. The others will not.

The result of this is that whilst we can sign three more players this summer without having to worry about our squad size, if we do, we will have to let five players leave (without replacements) before the end of next summer. It's also not unreasonable to think that ageing stars, John Terry, Ashley Cole and Frank Lampard may choose next summer to hang up their boots which could leave us in a position where we are only able to replace them with homegrown or U21 players due to already having 17 non-homegrown players.

In summary, we've got very little to be concerned about this season with regards to complying with the Premier League squad regulations, but there's a very real possibility of the [ship] hitting the fan next summer, so it's probably worth keeping an eye on when thinking about incoming transfers.