Seattle 2-4 Chelsea: some thoughts, some feelings

Share All sharing options for: Seattle 2-4 Chelsea: some thoughts, some feelings

Chelsea opened their preseason tour of the United States last night with a 4-2 win over Sounders FC in the Emerald City. It was, for the most part, a nice run-out for the squad - new additions, veterans and the like. Sure we can't read that much into an exhibition, particularly our first of the new season, but there are a few things worth noting. Devin has already provided his observations, so it's only right that I provide you with mine. Hit the jump for more. 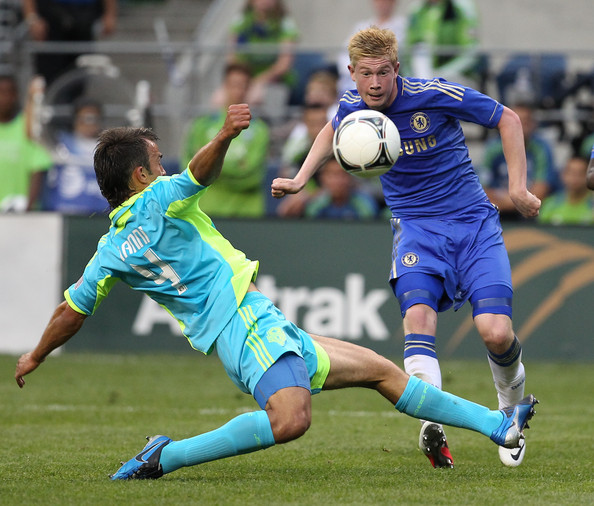 I'll be focusing on the opening 45 minutes for much of this piece because, quite frankly, that's when we saw more organization - and certainly more intent - from Chelsea. There were debuts for new signings Eden Hazard and Marko Marin, both of whom displayed real quality in patches during the first half. Hazard, in particular, looks a gem, even if we've only seen a fraction of him. Against a MLS side. With a rather shabby defensive unit.

The Belgium's first touch was exquisite on nearly every occasion and his general attacking movement was sublime. As I said on Twitter during the match, the kid appears to be a game-changer. Simple as. Marin, meanwhile, was strong in an attacking build-up sense though his decision making in the final third was pretty poor. His defensive limitations were also in full effect, though having Paulo Ferreira marshaling behind you isn't really going to aid the confidence. Still, these two are definitely going to add a lot to the squad. They're ability to find gaps in which to receive the ball will make us much more dangerous, not only on the counter attack but in attack in general.

Speaking of attack, did you notice the quicker build-up play we displayed at times during the first half. There was some excellent one-touch stuff on show, with the movement incisive and the passing swift. I loved it. For our first game of the preseason, and with so many new faces interchanged with potential transferees, it was promising stuff.

Aside from Hazard and Marin, Josh McEachran was probably the most intriguing prospect on the field. Aside from that fatal square ball that led to Seattle's opening goal, he was very good in possession, as we've come to expect. However, he also showed off some defensive nous that I wasn't aware he possessed. It was this tactical reading, dispossessing Mauro Rosales, that allowed him to set up Romelu Lukaku for the game's first goal inside three minutes. I'm very interested in seeing how Josh progresses this summer, because, as you know, this is a crucial period for him.

Lukaku. Well, he's an anomaly with regard to his combination of physical presence and athletic ability. His brace was well taken, and in the process he made a pair of highly physical central defenders look helpless. This is what we need to see.

The second half saw a landslide of changes - Ramires, Frank Lampard, Michael Essien, Kevin De Bruyne, Sam Hutchinson, Gary Cahill and Jamal Blackman all started the half while Lucas Piazon, Todd Kane, George Saville and Gael Kakuta were introduced fairly early on. It also saw both sides kind of coast toward the final whistle.

Of those introduced, De Bruyne was probably the most noticeable. The Belgian was very direct, getting on the ball and showing plenty of skill in getting into strong positions around the penalty area. However, he lacked an efficient shooting touch and would do well to rely on his teammates a little more. That will obviously come as he grows more comfortable at the club - and with another silky attacking option on the pitch at the same time.

Oh, and Piazon as a center forward/false nine? You have to love the preseason.

Overall, it was a nice way to open the new season. No injuries, winning debuts for our new additions, and the potential awakening of a sleeping giant in Lukaku. Of course, we have a significantly long way to go before we can declare that - sorry, but a brace against a MLS side isn't going to cut it. The preseason U.S. tour continues on Sunday in New York City, with Chelsea playing Paris Saint-Germain in the first-ever soccer match at the new Yankee Stadium.

I'll be in the house for that one. Devin may well be, too. We'll be back with a preview later in the week. Until then, enjoy a couple of videos highlighting Marin and Hazard's performances against Seattle. This is good stuff - thanks to YouTube user EdenHazard10i for the visuals.