So I just (ok, well, a couple hours ago) got back from Chelsea's practice at CenturyLink Field. It was great seeing the team in person for the first time. From a soccer (fine, football) standpoint, there really wasn't much to report. The team went through a very standard practice. Warm-ups, passing drills, half-field scrimmage, shooting drills, etc. Perhaps the biggest surprise to me was that Florent Malouda was actually there. He didn't exactly look like the happiest person on the pitch, but he was most definitely there training with the team. Other than that, all the expected players were there. The only players I didn't recognize were what I assume were some academy players. I guess the main reason for this post is to share with you some poorly shot video and pictures that I took while there. Don't expect too much, these were shot with my phone. It's mainly to satiate your appetite if you are severely deprived of recent Chelsea footage! On to some bullet points! 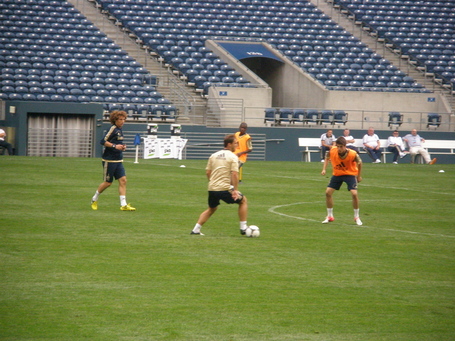 (Although first I have to share this picture with 4 of my favorite players at once! Iva, Luiz, Piazon, and Ramires!)

I think that pretty much sums it up. If I can think of anything else I'll be sure to add it to the post. Here are some links to the photo album and youtube page with the videos:

Awesomely grainy and shaky youtube footage of Chelsea players in action (hey, 2 are in HD!)

David Luiz messing around on a PK (via gokangs06)

(Edit: this video didn't embed as well as hoped. It looks better if you make it HD and full screen)

Hope you enjoyed! I know it wasn't the most informative post in the world, but hopefully you were able to get at least something out of it that you liked. It was a great night, and I'm very thankful that Chelsea opened up the practice for us fans. It was great getting a first-hand look at the team we all love in action!