Share All sharing options for: Will he? Won't he? Oscar 'deal done' 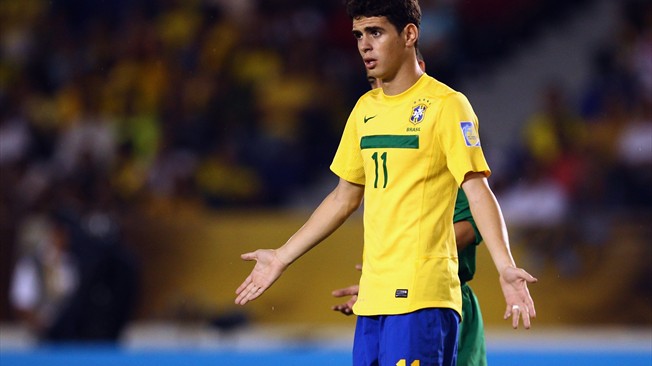 With Chelsea, there is never not a transfer saga. It's become, well, the norm. Michael Essien. David Luiz. Fucking Neymar. Luka Modric. Eden Hazard. Et al. So, it's only right that we enter into a new drama as we close in on the month of August. Enter Oscar.

You've seen the headlines. You've read the stories, the quotes. This rumor emerged from seemingly nowhere - I know I was caught by surprise - and it quickly moved at warp speed toward a potential transfer. Just last week it appeared that a deal was all but done with a fee of around €25 million (£19.8m) being enough to secure the player.

Not so as it turned out. Word came from Internacional that we had yet to meet their valuation of the 20-year-old schemer. Today we learned through Giovanni Luigi, Internacional president, that the club are seeking a Brazilian transfer record fee for the 20-year-old schemer. That would be around £22 million. Not exactly a substantial step up in fee if you ask me, but what do I know? The news that followed Luigi's announcement seemed to suggest that Chelsea found that figure indeed a step up, and thus weren't interested in raising their offer.

The player's agent, Carlos Meinberg Neto, was quoted today saying that Chelsea had pulled out of negotiations for Oscar. As questionable as this new development seemed - why in the hell would we end talks when we were not far off meeting the valuation? - it hinted at drawn-out negotiations between the two parties. Add in Oscar's participation for Brazil at the Olympics, and you have yourself a saga. Great.

That wasn't the end of today's action, though. Not in the slightest. Just over an hour ago, Sky Sports News reported that Chelsea had agreed a fee with Internacional for the player. The final number being £25 million. Sky Sports would understand this wouldn't they? I mean, we have confirmation from both player and club of the deal. Wait, we don't have that. And the price, it's dead on (not really, it's a tad higher than I expect us to pay).

Who to believe then? No one, dammit. This one is going to drag on for years, maybe decades - I can feel it (coming in the air tonight).