The Evolution of 'Revolution'

Share All sharing options for: The Evolution of 'Revolution'

In its simplest terms, a revolution requires equal parts dramatic change and rebellion. There's a tinge of insurrection inherent which defines the root of a revolution as damaging- a violent uprising that ultimately brings about new beginnings. Evolution, revolution's slightly less awkward step-sister, invokes a sense of rebirth and advancement, perpetuated by notions of cosmic Darwinistic-development and calm transformation. In short, it's a mixture of adaptation and natural selection through which a destination is reached. Where these two concepts convene describes precisely where Chelsea currently lie- unmistakably satisfied with last seasons triumphs yet frothing at the bit to implement a new regime. The delicate balancing act of refreshing the squad while blending veteran players with up-start prodigies requires tact, and masterful skill. But the execution of such transactions mandates a willingness to pay massive price-tags. While nothing new for Chelsea in the last ten years, the ravenous free-wheelin' explosion of lore appeared to be retired for the foreseeable future. But with Hazard at the plate, Hulk on deck, and more in the dugout, Chelsea appear to be returning to their old, mischievous, despised ways. More, after the jump: 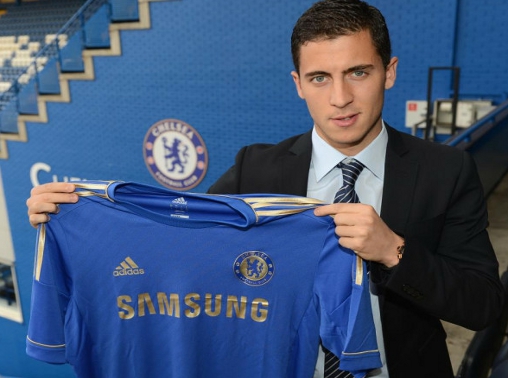 Make no mistake, this 'new' Chelsea ideal of buying prodigious talent is a rather old concept. Since taking the helm in 2003, Roman has spent approximately €1 billion to revitalize the club and place a marker on his desire of owning the most expansive collection of mega-watt players the galaxy can offer. The laundry list of players purchased, and the price tags, is simply astonishing. For the sake of comprehension, we've included the list of critical players, by season, added and subtracted for your perusal (some of the lesser lights will be ignored because, that would make this exercise altogether absurd). What's particularly striking about these results is, in short, we've been absolutely terrible at recouping value for purchased players. More often than not, we have a proclivity to allow players to leave on free transfers rather than attempt to offload them for pennies on the euro. While noble and altogether congenial, this strategy has produced an almost €200 million net loss on transfer fees for players under the Abramovich regime (not taking into account personal terms and wage packets, simply the bulk fee paid to Club X for Player A). Below are the results: 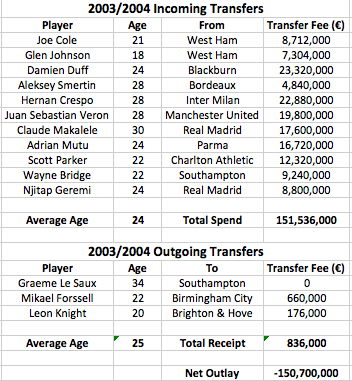 Year 1 of the Roman Empire, with a massive outlay on new players. Trend continues through first three seasons in charge. 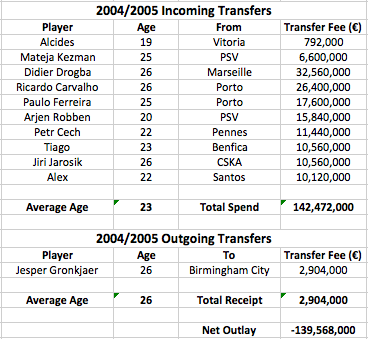 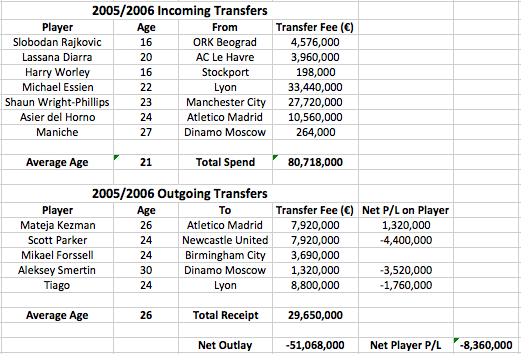 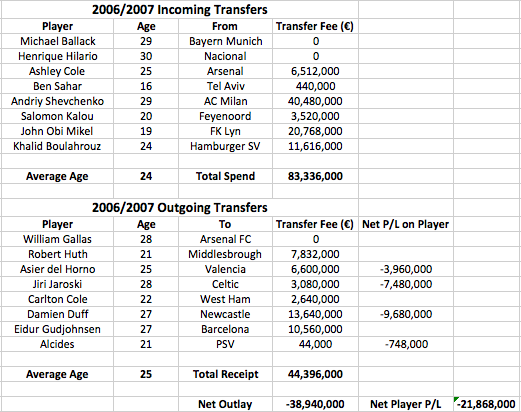 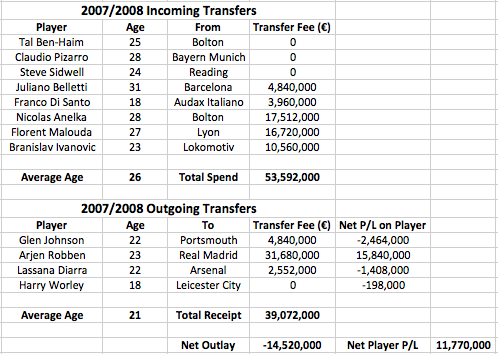 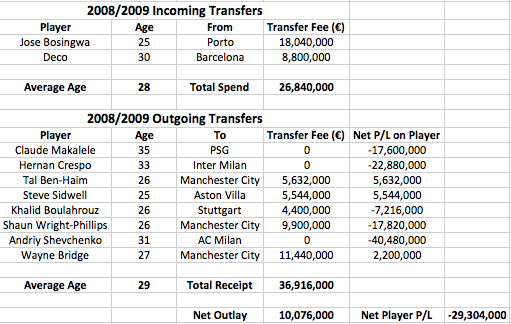 Year 6: First year under Roman where club spends less than it takes in- handful of players offloaded under Scolari. Coincides with global recession, Roman's desire to bring the wage bill down and spend less. Huge losses on players let go via Bosman (beginning of the worst trend). 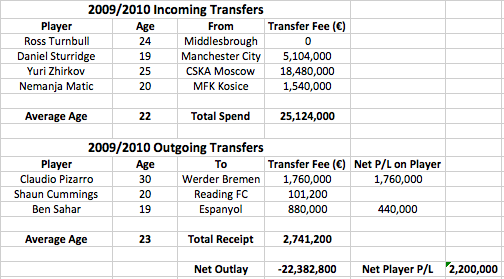 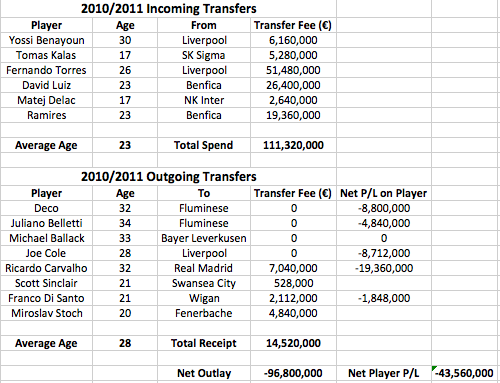 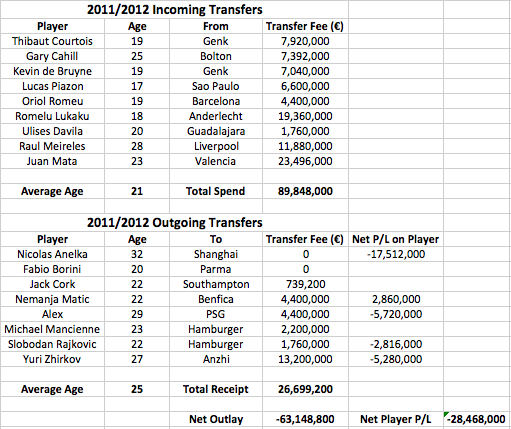 Year 9: Average age returns to its lowest point ever under Roman. Spending is high relative to last four seasons, however, value is returned on a handful of transactions. Still, more players released from contracts and allowed to leave on Bosman. Net Player P/L still far too high.

Certainly, this is a lot of information to process. The knock on Chelsea since Roman's acquisition has been a steadfast approach to transfers akin to fantasy football. Basically, he buys whoever he wants, regardless of price, and lets his toys rot on the shelf when he tires of them. The numbers, in general, fail to vindicate the naysayers. In total, Roman has spent an incredible 610,875,600 on players during his ten seasons in control. Astounding. What's more troubling, however, is that he's incurred a net loss on players purchased and sold/released under his oversight amounting to 210,000,000. Realistically speaking, Roman's not entirely at fault for these vast expenditures. The individuals surrounding him (namely Frank Arnesen, Peter Kenyon, Michael Emenalo, Ron Gourlay, Jose Mourinho, Avram Grant, Luiz Scolari, Carlo Ancelotti, Andre Villas Boas) are responsible for green-lighting a number of these transfers. Roman, in essence, is responsible for funding the deal- but not much more. That said, he's also very culpable for luring a number of high profile flops to Stamford Bridge.

The second criticism of Chelsea in the last ten years has been on a strict prevalence toward purchasing players 'past' their respective primes, and high in age. There's evidence however to suggest this is less based in fact and more based in the minds of those insisting otherwise. Since his purchase, Roman's Chelsea's average intake of players has oscillated between 22 and 24 years of age. The highest point, 28, came courtesy of two players who were purchased in a relatively light transfer window by the club's standard. Since that peak in 2008-2009, Chelsea have brought the average age of incoming players down to 22 years of age, and have signaled a clear shift in transfer principles to a younger nucleus of talent. Fernando Torres, acquired for the largest sum ever paid by the club in January 2011, was the last big-name signing of an established player. This summer's first signature, Eden Hazard by contrast, is less established but perhaps more heralded than any other player brought into the Chelsea stable under Roman's purview. Since the Torres acquisition, the club have shied away from traditional Chelsea purchases, and instead shifted the focus on attracting younger stars that might fly under the radar for a few seasons before eventually matriculating to superstardom.

Juan Mata, perhaps the first of this lot to really break out, was on the fringes of brilliance while at Valencia, only to become the fulcrum of Chelsea's attack this season. Thibaut Courtois, is a European Champion after steering Atletico Madrid to glory in the Europa League this season. Gary Cahill is a starter for the English national outfit, and played a vital role in the culmination of Chelsea's European successes last season- as did Oriol Romeu for a brief period. Romelu Lukaku has acres of potential, but simply needs an opportunity to showcase those abilities, much like Daniel Sturridge, Kevin de Bruyne and a number of other young players brought into the fold. Clearly, there has been a shift in approach at the club- ultimately one that can be attributed to a change at the higher levels of the club. The departure of Frank Arnesen to Hamburger SV last summer (in the wake of Carlo Ancelotti's dismissal) brought about the installation of one-time chief scout, one-time assistant coach Michael Emenalo to the Director of Football Operations. In his new role, Emenalo has embraced the principles of building a young fleet of budding prodigies by shying away from the high-dollar targets of lore, and instead opting to use Chelsea's extensive scouting network and hard-bargaining resolve to drive deals that are better served for the club's long term financial future.

The notion of 'evolution' has been bandied about around Chelsea for what seems like an eternity. Each year, the club are in some form of a revival- whether it's buying in bulk to refresh the contents of the squad, restricting investment simply for financial constraints, adding big names to a roster laden with marketing mavens, or searching for young talent to remain above the competition. Chelsea, in a sense, have employed every variety of transfer strategies since Roman's taken the reigns- to mixed reviews and varied levels of success. While there's a finite cap on what Roman is willing to spend on the club, and a limit to his vast expanse of resources, the club are altogether blessed to have a benefactor with pockets as deep as his. But where he used to be the only bully in the sandbox, there exist a handful of competitors with riches deeper than his. Manchester City, PSG, Malaga, Real Madrid, and others pose true and very real threats to the dominance that Chelsea used to command on the open market. No longer is it certain that the club will garner the best player simply because they can outspend the lot of those in line. Now, rather, Chelsea are actually on the outside looking in, with Manchester City claiming the title of domestic overlords on all things financial. This move from first-chair to second-in-command has necessitated a shift in philosophies and, in a sense, strategies for the club- and clearly the fruits of that labor are beginning to matriculate.

Winning the Champions League, despite Harry Redknapp's assertions, has been an undoubted boost to our recruiting initiatives. Adding that title to the mantle has increased the likelihood of players considering joining the club, has made it more attractive, and in a sense, sexier. The lure of European glory is the ultimate siren song that can coax a player from the Iberian peninsula, the back alleys of Brixton, or the sandy shores of Sao Paulo to destinations abroad. But where Manchester United might have limited themselves, Real Madrid might have stuffed themselves, and Barcelona might have prevented themselves, Chelsea are poised to profit. Understanding their new role as European heavyweights, the club seem determined to cash in on it's newly acquired clout by spending exorbitant sums like years one through three, smashing the ceiling of what has been conventional and in turn producing a handful of brilliant players to mix with the existing crop. This year's evolution, therefore, is less about catching up to the competition (as it has been in years past) and more about setting the standard of excellence for those looking up to follow. This year's change is necessitated by a keen desire to get back to the days when Chelsea were feared, loathed, but respected by everyone in and around the United Kingdom.

This iteration of Chelsea is hungrier than in years past, but tired of the jokes. This Chelsea hierarchy have heard the criticisms from all parts of the globe, absorbed the jabs, some ill-advised, some appropriate, but are through with being second fiddle. European success has bolstered their resolve, but not solved what ails them. For Chelsea to reach Roman's true apex, they must dominate in all competitions simultaneously. Thus, a renewed emphasis will be placed on domestic form, and recapturing the Premier League crown from the clutches of Manchester City. Defending the title on the continent will also be paramount, as Roman would much prefer for his toys to be the first London-based club to develop a dynasty to rival those Manchester/Barcelona/Madrid/Bayern/Milan types. There's a sense in the press releases, reports, and words circulating that this Chelsea set-up is, shall we say it, edgy. There's not so much anger as there is a chip on their shoulder. They've been through the battles, reached the summit and have yet to receive the plaudits they feel they're entitled to. They've done more than Arsenal, Liverpool, and Spurs combined since Roman took over, and have yet to receive the national recognition they warrant. If there's a bit of bite in their vernacular, it's coming from an honest place- they've been disrespected, left for dead, ridiculed, maligned, and dismissed as a failed experiment and a bit of a sideshow.

There's no evolution at Chelsea. There's a revolution. But it's not the conventional format that you're used to. Players aren't burning down Cobham en-masse. There will be no executions. This revolution is quieter, yet more venomous. Through every transaction conducted, every new player signed, every media release distributed, and every piece of content disseminating from the Chelsea camp, the message is clear:

We're back. And we want what's rightfully ours. Either step aside, or be prepared to face the wrath of our new toys.
Yours,
Roman Abramovich