So whom would the WAGNH community be looking at in the double pivot?

Share All sharing options for: So whom would the WAGNH community be looking at in the double pivot?

Yesterday we ran a piece giving you all several profiles from Whoscored and asked you to consider what set of qualities would make a player an ideal addition to Chelsea FC. We received a ton of responses, and it was especially fun to see the data coming in, as I knew who each of the players was. I hope you all enjoyed this type of thing, as it's certainly something we can do again in the future.

In all fairness, the whoscored player profiles certainly have their flaws. For one thing, only statistically recordable data is involved. If Jose Bosingwa doesn't miss a tackle because he was miles out of position or missed a run, this clear error does not show up on his profile*. There is also no way to account for the system a club plays. Midfielders feeding the Drog will likely seem to favor the long ball more than a Barcelona player would, statistical trends won't tell you that these players may actually be better suited to a different system than they currently play in.

*Honestly that's probably a good portion of the reason his profile looks the way it does. When he's in position to make plays he's an excellent player. If only he was in the right place or tracking the correct run more often...

Statistical profiles do have their uses though. Looking at whoscored tells us what every one of these players actually did last season when on the pitch. If whoscored lists tackling as a strength, it simply tells us that when attempting a tackle last season the player was successful more often than not. It does not take the level of competition or surrounding talent into account, it simply looks at the raw data. In that regard, it's certainly got it's uses.

Player 2 clearly wasn't overly popular with you guys, and player 6 wasn't a big hit either. Players 1 and 4 seemed to be fairly acceptable to everyone despite not being the #1 choice for too many, and players 3 and 5 seemed to be guys that people either loved or hated. Now I'll find the average rating of all of the responses and give them to you in a bar graph: 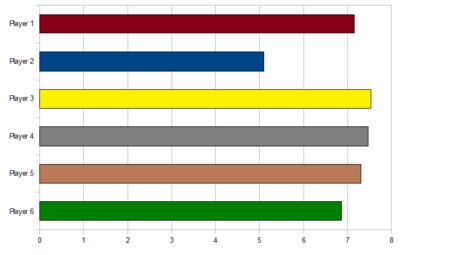 Looks like we had a few guys we really liked as a community. Player 3 received the highest overall rating, largely due to the number of people who just loved him. Player 4 was very close (7.48 to 7.52 average score), so it's safe to assume most of us would be comfortable with him as well. Players 1 and 5 weren't quite as popular, but neither look like they'd result in a full scale riot if we signed them. Player 6 still got some love, but nobody seemed to like player 2. Curious as to who they are? Here's the chart with names included: 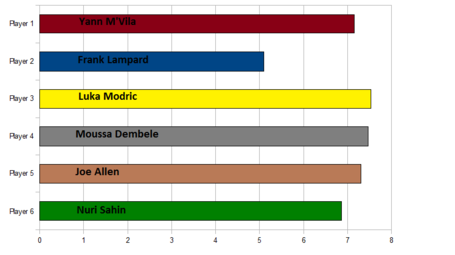 Make what you will of this, but this reinforces a few things we already knew. Most of us felt an upgrade to Frank Lampard was quite possible in this particular role, and our lack of love for Frank in this poll reinforces that. As a player, Luka Modric would be an ideal addition, and this poll also reflects that. Clearly some don't like his combination of age and price, but when that's not being considered he's obviously a great fit.

What surprised me was that amount of love that Moussa Dembele received. He's the one player in this poll that's actually been linked to Chelsea this summer, and many here have quickly dismissed him as not good enough. Oddly though, as a community we thought he was within only a few votes of being just as good a fit as Luka Modric when we didn't associate the name with the profile. While questions about the true value of the profile still remain, it's pretty clear that we should all be doing a little more homework on the Fulham man before dismissing him as not Chelsea quality. In that regard, he reminds me a bit of a central midfielder we bought two summers ago from Benfica. I'd say Ramires has grown on all of us by now.

As with every position, there are plenty of options out there that don't get bandied about by the media. Also worth noting, there are plenty of options that did not get included in this post. I firmly believe that we as fans become overly focused on some of the more published names, often ignoring guys that the media never mentions. Quality players exist in clubs all over the place, and the media doesn't always have an idea we're looking at someone (Courtois and Marin spring to mind immediately). Don't fall into the trap of assuming Chelsea don't have options at any position. Depending on what they are specifically looking for, there are always plenty of players to consider.