112 Goals. Champions of Europe. The End.

If assists are the new goals, are goals the old goals? Here's the breakdown of Chelsea's 112 (well, 110) new assists: 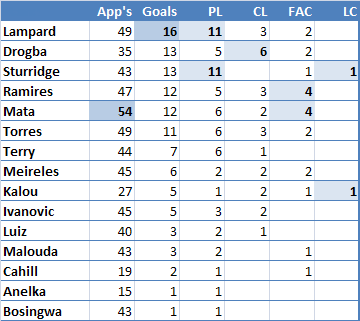 Five of Lampard's 16 were from the penalty spot, as well as one of Didier's 13, so it was in fact Daniel Sturridge who led the team with goals scored from "open play" - should I be impressed by this, considering that he's been crap for most of 2012, or should I weep for the state of goal scoring at the club? Salomon Kalou was the only player to score at least once in all competitions: 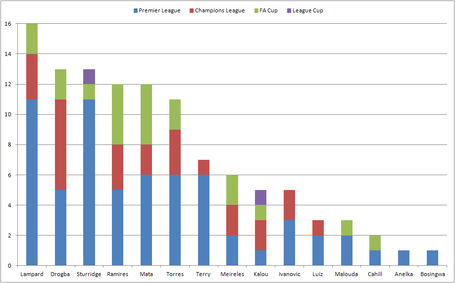 Of course, not all goals are created equal. A winning goal in the 90th minute is far more valuable than the 5th goal in a 7-0 rout. Since I'm nowhere near as smart as Graham, I cannot provide you with something as fabulous as our fearless leader might...so let's do something a bit more basic: "Game Changing Goals" (GCG). Yes, I just made that up.

Let's define a GCG as a goal that changes the point distribution of the match (or a 2-legged tie, where applicable), as it stands. Think of them as hockey's game-winning/-tying goals, but more "real time". Example GCGs, then: opening goals; game-tying goals; the next goal in a tied match; Terry's goal v. Napoli; Lampard's PK v. Napoli; Ivanovic's goal v. Napoli; Ramires's goal in Barcelona; etc. While we're at it, let's also see how the goals scored look on a "minutes-per" basis: 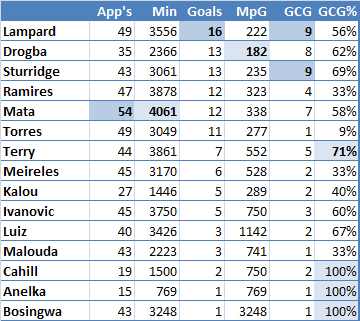 Oh, Fernando. He did end up averaging about 1-in-3, a ratio only bested by Sturridge, Lampard, and Drogba, and all 11 of his goals were heralded as blessings from up on high...yet only one (the opener v. Swansea) swung points in Chelsea's favor. Here's a colorful pie chart of all the GCGs: 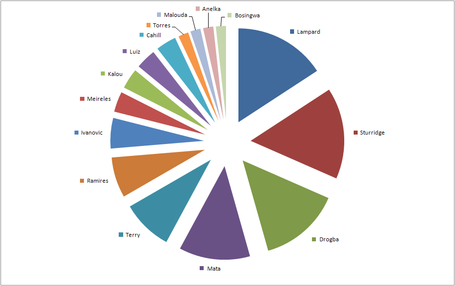