So what qualities do we want in our ideal central midfield target?

Share All sharing options for: So what qualities do we want in our ideal central midfield target?

Earlier today, Graham had a piece up concerning Luka Modric and the link from defense to attack. The double pivot seems to be a popular place for us to talk about improving the squad, but frankly a player who could excel in that role can be a bit hard to spot if it's not something you're specifically watching for. With that in mind, I've decided to do a fun little exercise today.

Whoscored.com is one of my favorite sites to use to look up statistics of players in the top leagues in Europe. They also have some cool features on their player pages, as they take statistics from each player and use them to determine strengths, weaknesses, and trends in the player's style. None of these items are determined based on physical traits or projection, they simply look at what the player actually did in their time on the pitch. In that regard, it's interesting to look at other players and attempt to determine if they'd fit in with the needs of Chelsea FC.

For this exercise, I've decided to look at several different players that I feel could be legitimate options for Chelsea in the double pivot. I checked out their profiles, and I've screencapped them for you below. I've blacked out the players names in the images you're seeing so that you judge them based strictly on what they've been doing on the pitch. Feel free to look them over. 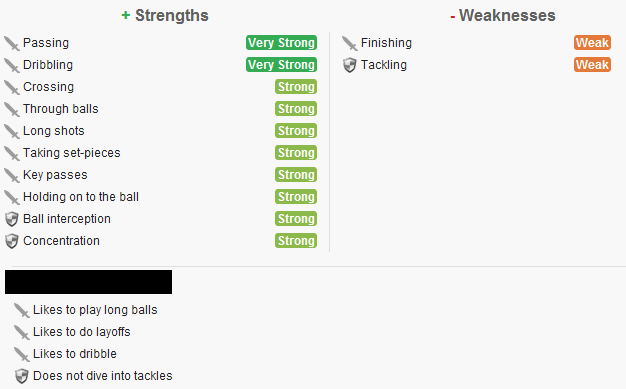 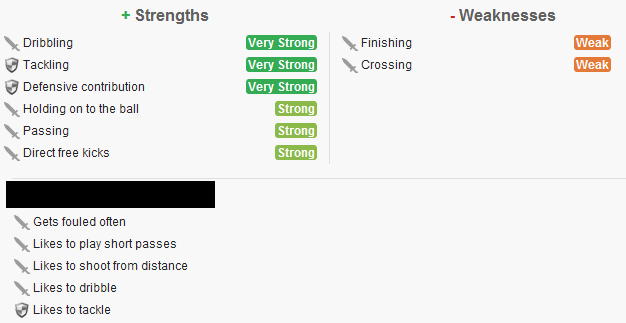 All six of these players are guys you've probably all heard of. One of them is Luka Modric. One is already on the Chelsea roster. The other 4 players are all reasonable alternatives to that pair and should all be attainable with the right bid*. Forget age, price, and names for the moment though. Based on what their play has told us about the 6 players above, which one would be your choice to add to the double pivot. Vote by filling out the form below (take your time), and feel free to leave your best guess as to who each player is in the comments. I'll come back to this in a few days and let you know who y'all prefer based on the voting.

*These are by no means the only options, I think you'd be surprised by just how many guys could actually help us transition from defense to attack with the attackers we now have.