On Maicon and his fit with Chelsea FC

Share All sharing options for: On Maicon and his fit with Chelsea FC

Chelsea need a right back. I don't think a single person here would argue with that, and the results of our poll last week only back that up. Whether that right back needs to be starting quality or just a competent backup is something that would be up for debate. Branislav Ivanovic is certainly a quality option as a right back, I don't think many here would debate that fact. One thing we certainly can't argue is that he's been a full time right back, and this season proved to be no different. Bran split his appearances between right back and center back almost evenly over the last several years, which was largely responsible for Jose Bosingwa seeing as much action as he did. We certainly can't expect to start Bran at RB every game if we expect to use him as CB cover, so we'll need a quality player regardless.

Today we got word that we're chasing Douglas Maicon, a player who was pretty much the universally accepted as the best right back in the world only 2 seasons ago. His reputation has declined since then though, and now many feel that Maicon is washed up. I'm not a Maicon fan at the rumored £8 million price tag, but at a more reasonable sum I think that Maicon is a pretty ideal fit as a short term solution. Maicon should not be counted on to play 50 games per season anymore, but in my eyes when managed properly he's still the best on the planet at his position. After jump I'm going to give you some food for thought on exactly why.

Anyone who watches Inter regularly would tell you that Maicon just isn't the same player anymore. They are right. Then again, anyone who watches Chelsea would tell you the same about Ashley Cole. Both players were noted as being the best in the world at their position only a few short years ago. Both were considered very good at both ends of the pitch. Both have seemingly declined, and both sets of fans will be hard pressed to prove otherwise.

As Chelsea fans, I think we could all see that Cole had something left to offer towards the end of the season. Roberto Di Matteo started giving regular starts to Ryan Bertrand in less meaningful games, and all of a sudden the old Ashley Cole was back. That leaves me with two possibilities...either Ashley Cole rises to the occasion when challenged, or Ashley Cole (at age 31) just plays better with more rest. Watching Maicon this season gave me exactly the same impression. I've got a theory that both of these players work better with more time off (as do most 30 and older players), so I headed over to whoscored to see if this was actually the case.

Since I was looking up Cole and Maicon's ratings anyway, I decided to look up several rumored Chelsea targets along with several other players considered among the best in the world at the RB position. I also looked up several of the guys we've been linked to this summer that played in the top 5 leagues (the Eredivisie and Liga Sagres don't have domestic data). I took their average ratings on the season, and put them into a graph. Here's what we have: 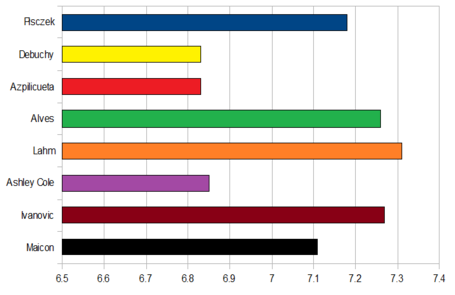 Interesting, isn't it? There is certainly some debate about the accuracy of these ratings, but I think they give us some interesting food for thought. If you believe whoscored, Bran is really good. It would also indicate that the RB market isn't all that great at the moment. All of that is up for debate of course, so make of these what you will.

What I won't argue, though, is that when a player has a great game, they tend to have a fairly good rating for that game. When a player looks generally awful, their rating relative to their good game generally shows it. Just following a single player throughout the season on whoscored will generally give you a good idea of trends in the players performance, regardless of just how accurate you really feel these ratings are.

With that in mind, I'll show you what my true reason was for going to whoscored in the first place. I decided to break down the ratings of both Maicon and Ashley Cole based on rest. Both players had about an equal number of games with 4 or fewer days rest as they did with 5 or more. I decided to break down their average ratings with the two differing rest periods, and simply plug them into the same graph we just looked at. Here's the new graph: 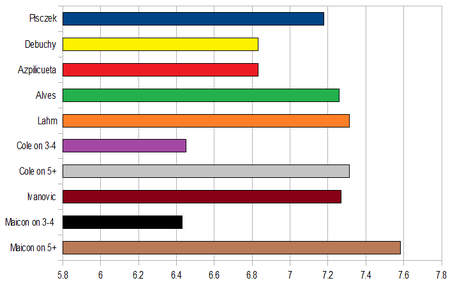 Looks a little different, no? If you buy into whoscored's rankings, Maicon is still a very, very good player when he's getting quite a bit of rest (as is Cole incidentally). Also like Cole, Maicon as a twice a week player is a shell of his former self. I think anyone who has followed either Inter or Chelsea regularly would agree with this just based on what their eyes have told them. I think common sense would probably tell us the same as well.

Whoscored ratings aside, I believe that Maicon as a part time player would be an absolutely fantastic addition. With his age taken into consideration, he's certainly not a great value at £8 million. Frankly though, I don't think there's a single right back we could possibly add this summer that would be a better player than a well rested Maicon. The right back market at the moment is littered with good but not great players*. Rather than committing to an option we don't love, it might be worth it to fix it short term and look at the market again in a few years.

*I'm working on the assumption that Pisczek isn't really all that available. A huge bid would likely get him, but Borussia Dortmund have very little reason to sell. In my eyes, you're kidding yourself if you think a bid of under £12 million will even get a return phone call.

If Chelsea were to pair Maicon with Branislav Ivanovic, it would be an absolutely no lose situation on the pitch. Ivanovic would still get plenty of work in the same role he's occupied for the last several seasons. We'd also likely get to see the Maicon that Inter fans saw when he was rested, a guy that is arguably still the best in the world at his position. Todd Kane and every other Chelsea prospects could focus on developing on loan without fearing that they'll never have a place to fight for. If the price is cheap enough, I think Douglas Maicon would be a homerun. Discuss...