What would the WAGNH community have done with Thibaut Courtois?

Share All sharing options for: What would the WAGNH community have done with Thibaut Courtois?

Yesterday we got word that Thibaut Courtois would be returning to Atletico Madrid on loan for a second consecutive season. This had widely been expected to happen, but the confirmation of the move puts to rest any chance that Petr Cech would be moved this summer as we usher in the Thibaut Courtois era.

I gave everyone 5 options from which to choose. You could choose between staying at Chelsea, a loan to a La Liga, Serie A, or Bundesliga, A loan to a Premier League side, a loan to a lower level English side, or a loan to a smaller continental league. We got just over 1800 responses, and the preferences of the community as a whole can be found after the jump. 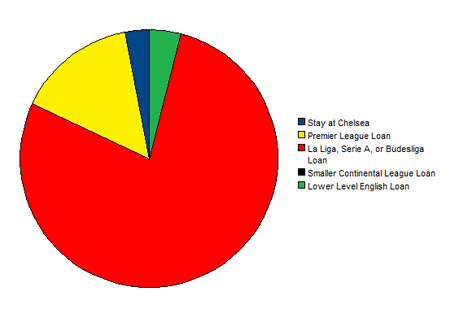 Interesting, isn't it? 78% of the community will get their wish on this one. 15% of the community felt that Courtois would be best served being farmed out to a Premier League side. 3 % of you were ready to keep Courtois at Chelsea, and the remaining 4% of you felt he'd be best served learning in the lower levels of English play. The smaller continental option only received 4 votes out of the over 1800 received, so that minority doesn't get a visible slice of the pie chart at basically 0%. Discuss away in the comments section below.