Chelsea and Roberto Di Matteo have been cast in a very negative light by some due to the style with which they won the Champions League title*. Chelsea sat deep, absorbed pressure, forced their opponents to over-commit to the attack, and then hit them on the counter attack. Neutral fans often described this tactic as boring "anti-football". Clubs like Barcelona and players like Messi even go so far as to say they'd rather lose with their beautiful Tiki Taka than subject their fans to such a negative brand of football.

*Did you know that Chelsea are Champions of Europe?

I've always been curious just what Barcelona's Tiki Taka would look like without the services of the great Lionel Messi, as frankly the basic goals of Tiki Taka and Di Matteo's anti-football are virtually the same in my eyes. "Anti-football" has a deep lying, compact defense that doesn't allow opponents time on the ball as they approach a dangerous area. Discipline is the key to holding the correct shape to make this work, shots and goals come when the opposition over-commit and get pulled out of good defensive position.

Tiki Taka works on the same basic principle, but approaches it from an entirely different angle. Spacing is key in Tiki Taka as well, as when in possession of the ball the Tiki Taka players will hold tight triangles. They'll wait for the defense to make a mistake before taking a risk, often racking up enormous short, safe passing numbers in the process. This allows them to quickly converge on the ball when they turn it over, always leaving them in great defensive position. Often the best attacks come after the Tiki Taka team turns it over, as their proximity to the ball often results in them regaining possession while the opponent is attempting to transition to attack. The Tiki Taka team will be exposed when they turn the ball over in space, as was exploited several time by Chelsea in the Champions League semi-final.

There should be no question that Barcelona are more exciting in their basic approach than Di Matteo's Chelsea side, but my contention is that it's due entirely to the presence of Lionel Messi. Without Messi or a similar out of this world player, I don't believe that Tiki Taka is any more "attacking" in nature than the "anti-football" that is so loathed by all. Unfortunately we've never had to see the current Barca side play in a knockout tournament without Messi for an extended period, so I've never really been able to test that theory.

Luckily for me though, the Spain national team are a pretty similar squad to Barcelona without Messi. They also try to emulate the Tiki Taka system employed by Barcelona, although that may be due as much to Vincente del Bosque just not being a very creative manager as anything else. Barcelona had to play much of the season without the services of a traditional center forward due to injury issues, and del Bosque has seemingly decided to copy their plan despite having respectable options at the position. Best of all, the Spanish national team plays in a knockout tournament so we can really compare the 2 styles.

So what qualifies as "attacking football"? What should we be looking at? Goals are obviously something to look at, as scoring is clearly the primary reason to attack. We should probably go a little further though, and look at shots. It seems logical that an "attacking" team would have more shots in general than an "anti-football" side, so we'll compare how many shots the two sides are getting. Finally we'll look at shots on target, as it will be interesting to see if there is anything to be gleaned about the quality of the chances the two opposing styles are creating.

Roberto Di Matteo took over in the knockout rounds of the Champions League and managed only 6 knockout games in the successful campaign. As the style of play and quality of competition is generally different in the knockout rounds than it is in group play, I decided for the purpose of this exercise to look only at Spain's performances in knockout play as well. I also averaged the totals in our 3 categories for a per 90 minute rate, as knockout games often end up going 120 minutes. Here's how the two teams compare: 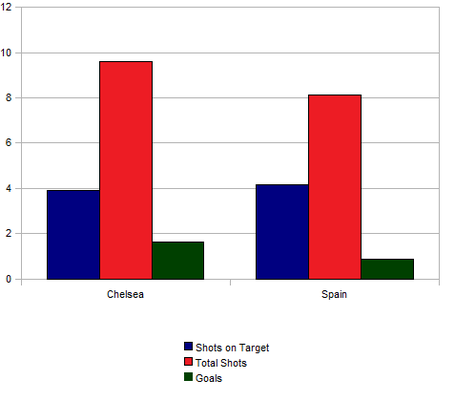 This doesn't look all that different, does it? Spain average .25 more shots on target per 90 minutes than Di Matteo's Chelsea, average about 1.5 less total shots per game, and score at about 1/2 the frequency. If I had to make a judgement based on that data, I'd likely come to the conclusion that "anti-football" is actually a more "attacking" style than that of Tiki Taka.

In fairness, I'm making a judgement of Spain based on only 2 knockout games in Euro 2012. It would be nice if we had a 6 game sample with which to compare, wouldn't it? Oddly enough, when you add the 4 knockout games from the last World Cup to this year's Euros we have 6 games with which to compare the 2 teams. More interestingly, neither team actually lost a contest in that span, and both teams had 2 contests go to extra time with 1 resulting in an extra time winner and 1 resulting in a penalty win. Both are also now defending champions of the biggest competition they can play in. Kind of funny similarities, aren't they? Anyway, here's how the 2 stacked up after we looked at a 6 game sample from each: 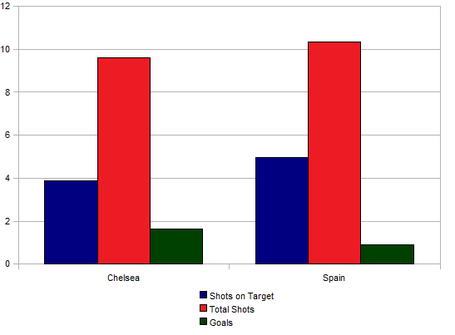 Once again, this really doesn't look too different. Over 6 games, Spain have averaged a full shot on target per 90 minutes more than Chelsea. They've taken about 2/3 of a shot per 90 more than Chelsea, but still been substantially outscored. All in all though, I'd imagine these results are far different than what 99% of the football watching world would have expected to find. After all, Spain play Tiki Taka, and Tiki Taka is all about attack.

Chelsea and Spain go about winning in very different ways. Both have the same basic concepts though, as both focus on tight spacing, organization, and exploiting mistakes made by their opponent. Neither produce a ridiculous amount of shots, and neither produce eye popping numbers of goals. Both teams are focused on being brutally efficient machines, and both are current defending champions because of it. When you really look at the numbers, both are eerily similar in their attacking output. It's time to stop pretending that Tiki Taka is somehow morally superior to "anti-football", as neither approach is particularly adventurous by nature. Without Lionel Messi to make it pop, Tiki Taka is just another results before beauty system that's not overly exciting to watch. If Spain win Euro 2012, a strong case could be made that they actually "did a Chelsea".