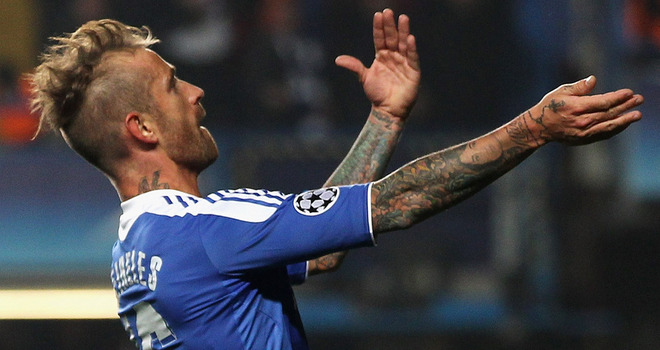 We continue our look back at the season that was with Day 3 of our reader polling. In this space, we look to establish which of the new guys proved to be the coolest kid on the block. There were, as you know, several signings completed in the summer of 2011. The moves didn't stop there, either, with a handful of transfers taking place in the January transfer window.

Most of the season's signings were made with a considered view toward the future - peep the likes of Patrick Bamford and Ulises Davila. However, that wasn't only the case. A number of centerpiece transfers were completed, including the lovely Juan Mata snubbing the Arsenal and hopping over to Stamford Bridge from Valencia on 22 August.

But, as it customary, we need to sort this out. So, I ask you guys to tell me who you thought was Chelsea's best signing for the past season. While Mata may seem to own this category, it's not as straightforward as it could be. There is this Belgian kid, a goalkeeper, who kind of tore shit up for Atletico Madrid. And there's also a former Bolton central defender who, despite becoming a polarizing figure around these parts prior to his move being made official, pretty much blew away all expectations upon arriving in London.

Before you vote, here's a quick rundown of our nominees:

Juan Manuel Mata
Transfer: 22 August 2011
Fee: £23.5 million
Mata was, simply put, a joy to watch in his first season with Chelsea. More to the point, Mata was, in all reality, our only true creative outlet among our attackers. He may have struggled with the rigors of the club's intensive schedule, but he never once struggled with adapting to the Premier League. He finished the season with 12 goals and 22 assists in 53 appearances - superlative totals. And to think, he's only going to get better.

Raul Meireles
Transfer: 31 August 2011
Fee: £12 million
Meireles was secured from Liverpool in the final minutes of the summer transfer window. For most Chelsea supporters, the move was viewed as a last-minute emergency buy to shore up a midfield that was sorely lacking in both quality and numbers after an injury to Michael Essien. In that sense, I think we can qualify Merieles as somewhat of a success in his first season with the club.  He had his problems no doubt, but also popped up with some excellent performances in vital matches. His goals against Manchester City and Benfica were massive. He was also among the heroes who warred in the trenches at the Camp Nou.

Thibaut Courtois
Transfer: 26 July 2011
Fee: £7 million
The first of two signings this season from Racing Genk, the Belgian goalkeeper looks to have been an inspired piece of business. And a worthy successor to Petr Cech - whenever that passing of the torch takes place. Just 20 years old, Courtois spent the season on loan at Atletico Madrid. He excelled in La Liga, and in Europe, keeping 22 clean sheets in 46 appearances. His crowning achievement was holding Athletic Bilbao scoreless in Atletico's 3-0 win in the Europa League Final. His season prompted Cech to say in June that Courtois is one of the best talents in Europe. No question.

Gary Cahill
Transfer: 14 January 2012
Fee: £7 million
I don't think many Chelsea supporters were expecting much from Cahill when he joined from Bolton in mid-January. Most of us were, well, wrong. Cahill was solid during the second half of the season, and at times outstanding. Case in point - his performance in the Champions League semifinal first leg against Barcelona at the Bridge, where he stepped in for the injured David Luiz and was everywhere. He recovered from an injury (somewhat) suffered in the second leg to start alongside Bob in the CL final, where he was again a valuable asset. Yeah, I'd say 7 million sterling for this guy was excellent business.

Kevin De Bruyne
Transfer: 30 January 2012
Fee: £6.7 million
Another young Belgian from Genk, De Bruyne was on Chelsea's radar for a majority of the summer. It wasn't until January that a move was completed - and, boy, are we glad it was. This kid has got the tools to be special. He closed his final season at Genk with eight goals (13 goals according to some outlets) and 15 assists (possibly official) in 36 appearances. This despite dealing with injuries, notably a calf problem and a broken toe that ended his season early. His game spiked after signing with Chelsea, with a number of notable performances before the toe injury. He's good with both feet and brings with him natural width. A great signing it would seem on the past season's evidence.