Five* Blues played in the final round of Euro 2012 group stage. All of their respective teams tasted victory and are now through to the quarter finals. Here's how Petr Cech, Raul Meireles, Fernando Torres, John Terry and Ashley Cole did in this round of the competition.

* Ed Note: Apparently Malouda came on as a sub and played about 30+ minutes for France against Sweden. I didn't see the game. If you saw it, give us a brief recap of his performance in the comment section. 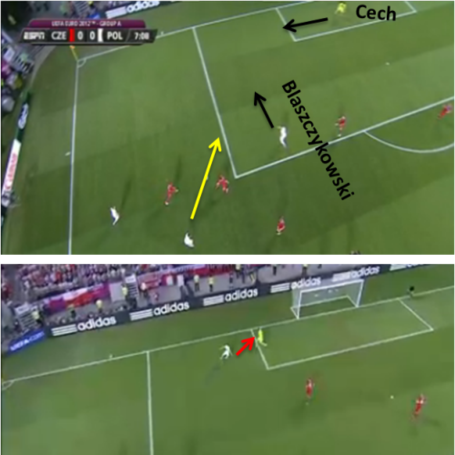 Petr Cech earned his first clean sheet in the competition with an impressive performance between the sticks. Needing a win to advance to the quarter finals, Poland took the game to the Czechs in the first half. Within the first 15 minutes, they managed 6 goal attempts, drawing one particularly good save from Cech (as shown in picture above) -- the Chelsea keeper was quick to close down Blaszczykowski and blocked the shot. Another impressive save came around 22nd minute; Boenisch testing Cech with a bouncing long range effort. Again, Cech palmed it away. This initial Polish pressure died down in the second half and Cech had only needed to make a catch a tame effort on target. This was definitely his best game in this tournament and Czech will play Meireles' Portugal in the next round. 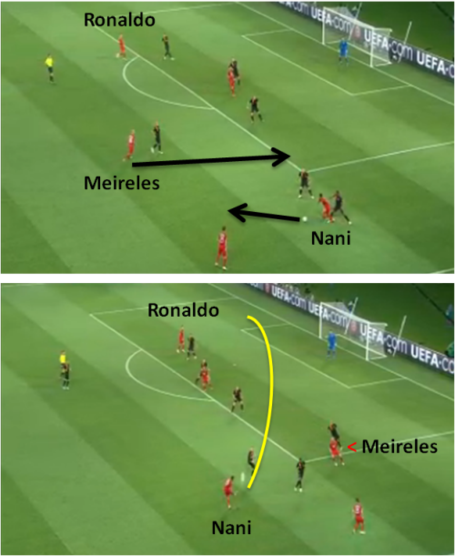 Looking at his tattoos and hairstyles, we all know that Raul Meireles is not a very mainstream kind of a guy. But it is not only his looks that surge against the conformist tide. In an age when the number of passes a midfielder can make in a game is equated with his ability, Meireles has been very stingy with his passes in this tournament. Here's a quick passing stats sheet of his (completed/attempted): vs Germany 28/35; vs Denmark 10/18; vs Netherlands 17/19. That's 55 complete passes in three games. That , though, does not capture what he does so well for his team -- covering his more attack-minded teammates in defense and making forward runs to open things up in opposition's defense.

Early in the first half, Meireles occasionally bombed forward from the right side of Portugal's midfield and joined the attack. Most notably (as shown in above picture), his diagonal run to the right wing created an opportunity for Nani to whip in a cross for Ronaldo whose header was saved. After about 25 minutes into the game, it was apparent that Netherlands were coming down Portugal's left flank where Ronaldo often left a defensive hole. Meireles was then switched to the left side of midfield to provide better cover for Fabio Coentrao and it was successful move -- very few of Netherlands chances came down that side after that. It also worked out for Portugal's attack too as Moutinho, now on the right, combined well with Nani to create attacking chances down the right. 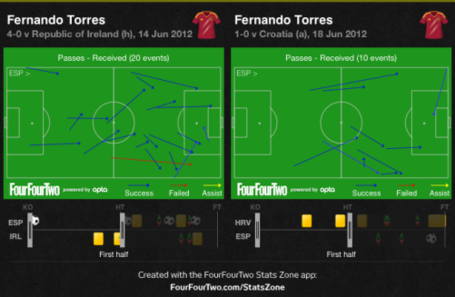 We will focus on one statistical comparison in this recap of Torres' performance against Croatia. Fernando Torres received twice as many passes against Ireland (20) than he did against Croatia (10) in the first half of each of these games. If you look more closely, you will also notice that Torres received more passes that were closer to the opposition goal against Ireland than he did against Croatia in the first 45 minutes. There are three factors that go into a pass received statistics -- (1) quality of pass from the passer, (2) quality of movement from the receiver, and (3) quality of defense who can intercept or interrupt both the passer and the receiver. I think all three of these factors were in play in Torres getting fewer passes in the Croatia game.

In the first 30 minutes of the game, I have no major problems with Torres' movement. He made diagonal runs across the pitch; he dropped into midfield when he needed to; he moved out wide on occasions; he looked for crosses and passes in behind the Croatia's defense. But factor 1 and 2 were working against him. There were some very uncharacteristically poor passes from the likes of Iniesta, Silva and even Xavi during this time. And this was partly because Croatians were pressing very hard, closing down very quickly and making good interceptions/clearances. But after half an hour, Torres' movement also suffered. He started to stand around at the top of the pitch without any real proactive movements. All these factors combined to limit his attacking play in this game against Croatia.

However, I still think Spain looked much better with Torres in attack. Don't take my word for it. Here's what Croatia's coach Slaven Bilic said after the game: 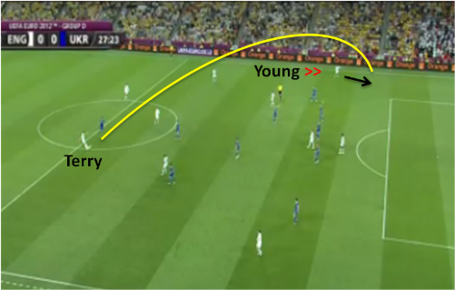 We didn't see anything new that we haven't seen from John Terry in his performance against Ukraine. He can make accurate long passes from defense to attack with both feet; he is a ball magnet -- through tackles, blocks, interceptions and clearances -- when defending deep inside his half; he can be beaten by pace when defending high up the pitch. Check, check, check!

England have very little creativity in midfield, which means that their attacks either move forward down the flanks or go directly from defense to attack with long balls. One of the best England chances came in the first half when Terry delivered a long pass from the halfway line to Ashley Young on the left wing. But Young's subsequent cross was headed wide by Wayne Rooney. For the majority of this game, England defended deep with two banks of four -- a defensive system that suits Terry. He made plenty of crucial tackles, interceptions and blocks all over the 18-yard box. However, he got caught out by Devic's pace when defending high up the pitch (even though it was an offside situation) in the incident involving the controversial goal-line clearance.

Compared to Terry, Cole had a much more uneventful night (other than making history and setting new tournament appearances record of course) on the left side of England's defense. Initially, the left back ventured very high up the pitch, connecting well with Young. However, the movement of Ukraine's Oleh Huisev down that flank pushed Cole and Young back in the second half. The most memorable moment of Cole in this game was in the second half when he forced a good save from the Ukraine keeper, lashing on to a clearance with his left foot from inside the box.

All seven Chelsea players involved in this tournament are through to the quarter finals (and at least one is guaranteed to be in the final). What's your impression of these players in this round and in the group stage in general? Thoughts? Questions? Concerns?