Continuing* from yesterday's rundown of assists, let's add in the concept of "game-changing" events. I introduced this idea when discussing the 2011/12 goal statistics and a few of you even managed to like it well enough to call for its inclusion here as well. Well then!

*I made this a separate post rather than just update the previous one to increase its visibility. Because it's glorious. Or something.

In case you don't remember, a quick refresher on the game-changing goal (GCG):

Let's define a GCG as a goal that changes the point distribution of the match (or a 2-legged tie, where applicable), as it stands. Think of them as hockey's game-winning/-tying goals, but more "real time". Example GCGs, then: opening goals; game-tying goals; the next goal in a tied match; Terry's goal v. Napoli; Lampard's PK v. Napoli; Ivanovic's goal v. Napoli; Ramires's goal in Barcelona; etc.

Chelsea scored 57 GCGs plus they got one each from Jonny Evans and Neil Taylor for a possible total of 118 game-changing assists (GCA). Five of those were lost to the generosity of opponent turnovers, while one is missing due a truncated highlight (I have zero desire to watch the 3-5 Arsenal debacle again so I do not know who won the corner from which Terry scored). Here's how the remaining 112 GCA break down: 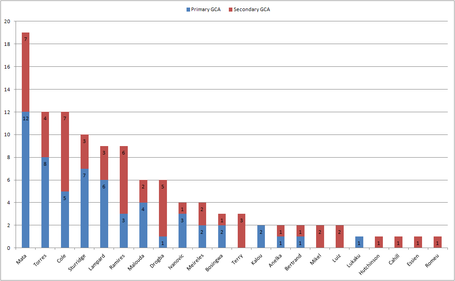 It's all but surprising that Juan Mata has a healthy beating of anybody else in the squad. Ashley Cole, Fernando Torres, and Daniel Sturridge do contribute with double-digit GCAs, while Frank Lampard and Ramires are just off that mark at 9. 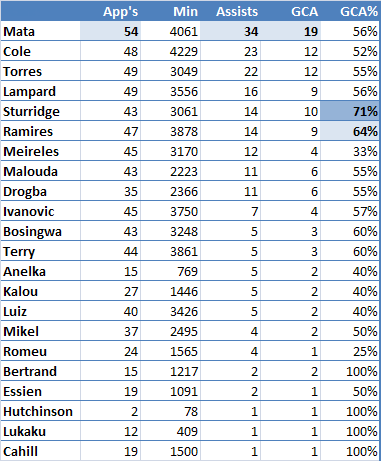 When expressed as a percentage, Sturridge suddenly stands out. Disregarding the players with horribly small sample sizes, most everybody else is within a range of 40-60% of their assists getting classified as game-changing (fascinating? coincidence? - there certainly seems to be a sweet spot around the mid-50s). But Sturridge on 71% (10/14) and Ramires on 64% (9/14), take a bow! We all recognize Ramires as a game-breaker but it seems that our memories of Sturridge's contributions have faded rather badly. I know that mine have.

The final logical step now is to combine GCG and GCA into game-changing points (GCP): 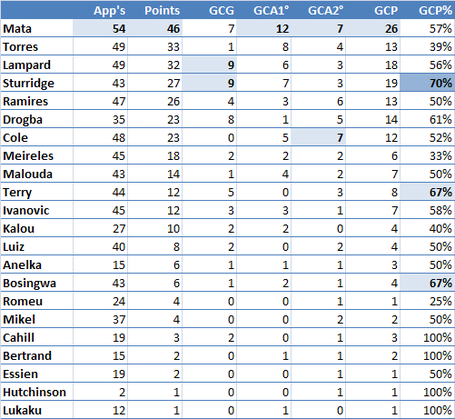 Mata may take the cake with the raw total, but it is once again Daniel Sturridge who stands out the most to me. An even 70% of his points fit the game-changing criteria! In addition, we get a numerical manifestation of John Terry's big game mentality (then again, see also: red cards) and a somewhat funny appearance from Jose Bosingwa. It seems that when Jose did manage to create something decent, it quite often was an important contribution.

Torres is obviously weighed down by his lack of GCGs, but he was operating at just about 2/3 of Didier Drogba's GCP pace. A ripple effect can be seen on Raul Meireles even, who had a foot in several Torres goals. I'll just point out the obvious and say that this needs to improve for next season.

Until then, let's all admire Juan Mata's giant slice of GCP pie: 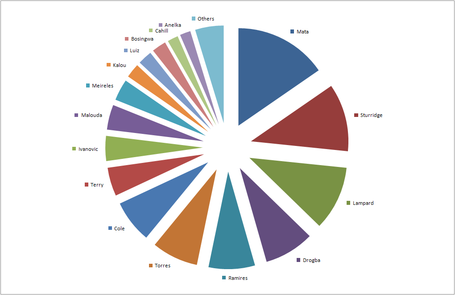