Torres, Torres, Torres. It's your time to shine, buddy! It's assist time! Assists are the new goals, creating goals is the new scoring goals. The new Torres is much better at these new goals than he is at the old goals.

Of course, it was actually Juan Mata who led the Chelsea assist charts, and by no small margin either. Regardless of whose data you trust, the little Spaniard had almost as many assists as the 2nd and 3rd highest assist-men put together. Impressive.

The data source issue is a bit of a bother. The English FA do not seem to keep separate assist counts, instead proudly displaying some worthless Actim/EA Performance Index. The League and FA Cups seem to care even less. FIFA has been keeping track for less than 20 years. I didn't bother to find out what UEFA is doing because I had grown frustrated by then. As an example, Juan Mata may or may not have the following number of assists: 26 (CFC, all comps), 20 (ESPN, all comps), 13 (ESPN, PL only), 13 (Soccerway, PL only), 13 (Whoscored/Opta(?), PL only). So maybe he had 13 Premier League assists. But then Fernando Torres may or may not have had the following number of Champions League assists: 4 (ESPN), 5 (Soccerway), 4 (Whoscored). In the case of Juan Mata, two of those three sources have him on 3, while one of them has him on just 2 assists.

What are we do to then? Hit the jump to see my attempt at a solution.

Part of the problem stems from the difficulty of defining an assist. "Key contribution" is a phrase that gets thrown around a lot when this is discussed, but does that really mean? Rather than worrying about defining what's key and what's not, I simply took that requirement out. And before you jump at my throat, think of it this way: why restrict a player's key contributions to just plays that result in goals? Key passes, through balls, etc would be much more useful when kept as a separate stat.

Inadvertent bounces don't count, although this could be a grey area (there was only one such instance for Chelsea last season: Gary Cahill's goal at Manchester City). Gifts from Steven Gerrard and others don't count either, so Juan Mata's very first goal for Chelsea or Fernando Torres's second v. QPR would be unassisted as well.

Regardless of how assists are awarded, I find the lack of secondary assists in football absolutely baffling. A game where so much emphasis is placed on teamwork and build-up play, to only reward the last one or two players to touch the ball seems criminal.

Since I'm already giving out assists to every Tom, Dick, and Harry, I might as well start giving out two! The general criteria are the same as for primary assists, with a few additional wrinkles. The biggest one is that, unlike in hockey, a scoring play will insist on crediting the last three distinct players to be involved. So if two of them play a 1-2 for the goal or if a player wins and then scores a PK, etc., the scoring gets extended back for one touch (or more). I'm not sure if I'm explaining this coherently - way past my bedtime here - I'll try to do better next time.

Out of the 112 goals, only 16 did not get the full complement of assists, due to either turnovers/gaffes by the opponent playing a part (Reason 1) or to yours truly not bothering to watch a full match, opting instead for an incomplete highlight (Reason 2 - these may have actually deprived players of a couple assists). Here's a full list, in case you're interested:

The biggest aim, the biggest reason behind all this is to reward passes such as Frank Lampard's glorious ball to Ramires for Drogba's goal v. Barcelona. It also rewards actions such as Torres winning that corner kick v. Bayern Munich. Sure, cheap assists can and will be picked up as well, but my hope/theory is that true quality will shine through. Rewarding a second assist will also paint a more complete picture about the players most often involved in scoring plays.

So after all that ado, and after having rewatched all the goals from the season that was, I present you the full table of primary & secondary assists. I've also included for reference the totals for all competitions as reported by ESPN and Chelseafc.com: 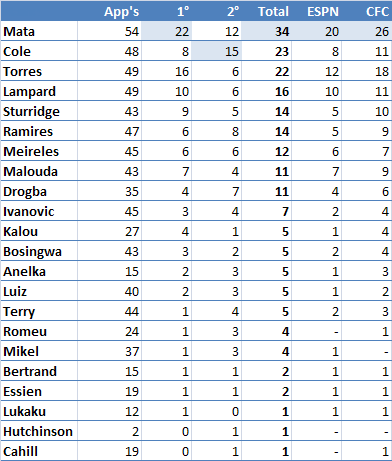 Quality does shine though! Mata is first, regardless of who is counting. Torres is second by most counts, although Ashley Cole's team-leading 15 secondary assists do put him just ahead by my count. The customary marauding runs by Cole may not have resulted in a tremendous amount of primary assists, but his involvement turns out to have been key in many other goals as well. The disparity between our left side/wing and right side/wing should probably not go unmentioned either. 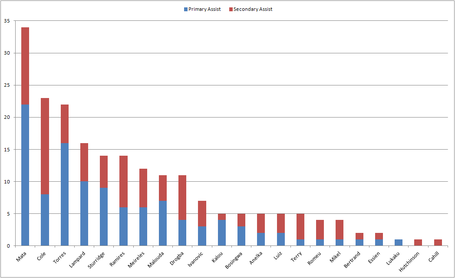 When we factor in minutes, we get a similar picture with Mata, Torres, Cole, and Nicolas Anelka all averaging at least 1 assist every 2 games. Florent Malouda does not look nearly so useless in this chart: 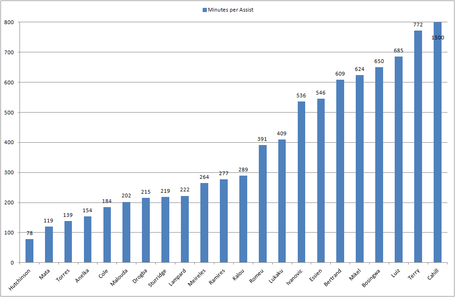 Much of my inspiration for all this comes from hockey so it's only logical to take a hockey-esque final step and combine goals with assists into points. Unlike silly MLS schemes, all goals and assists count for just 1 point: sometimes all the work was done by the assister, sometimes it was just an extraordinary finish - in the end, the quality should shine through: 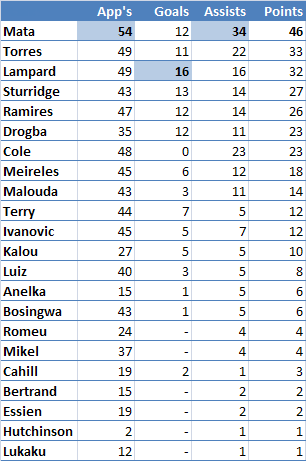 As if there was any doubt, it's Juan Mata who shines the most. Fernando Torres slides into second, just a point ahead of Frank Lampard. PASS the Courvoisier!

Converting the numbers to a minutes-per basis shuffles the deck slightly. The leaders remain the same, but the contributions of Anelka, Didier Drogba, and Salomon Kalou do get pushed forward a bit. Jose Bosingwa reminds us of his all-around crap season, while John Obi Mikel pays the price for his early season inconsistencies. 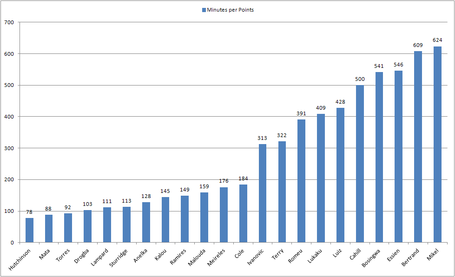