Andriy Shevchenko scored a brace today for THE Ukraine. Those two goals were enough to propel the (co-)host nation to a rather entertaining victory over the Mighty Zlatans...whose leader, coincidentally, is rippling the same Milanese nets nowadays that the once mighty Ukrainian did.

Andriy did shank one well wide in the first half, before converting a couple crosses with his head in the second: a thumping header that would've made Didier Drogba proud for the first one and a sweet little near post flick that somehow snuck in for the second.

Fernando Torres, meanwhile, scored a brace of wasted chances for the Holy Tiki-Taka Empire yesterday. In the first, he was tackled rather hilariously by Gianluigi Buffon. Buffon, as you may recall, plays goalkeeper. In the second, he went for the audacious. And missed. I wish it had gone in, because that would've been cool and awesome. But it didn't and so it wasn't.

It should be pointed out that Spain looked much better once he arrived on the scene (granted, the fact they finally put on a striker and a proper winger may have been enough regardless) and Torres should be praised for managing to get that many scoring chances just as a late(ish) substitution. Then again, the fact that he got his chances is just as unsurprising as the fact that he managed to miss them.

Of course the common thread here is that both players have worn Chelsea Blue...and they both looked quite good in uniform. And a little something something about outrageous transfer fees, failed expectations, and vanity purchases by Uncle Roman.

So let's take a broad statistical brush and compare the two!

Shevchenko's Chelsea career lasted 3 seasons, the last of which was actually spent on loan back in Milan (during which he scored an astonishing 2 goals, none of which came in league play). He made 48 Premier League appearances, scoring 9 goals. Generally, he was Torres before there was Torres. He cost £30.8m (£36.5m in 2011 moneys), a record fee at the time for an English club. 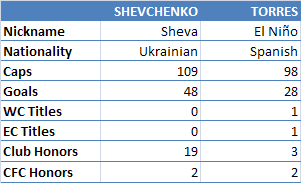 Believe it or not, Fernando Torres has now made an appearance in 46 Premier League matches for Chelsea. (Hey look, that's almost exactly 48!) He has scored 7 goals. He cost £50m even, a record fee at the time for an English club. 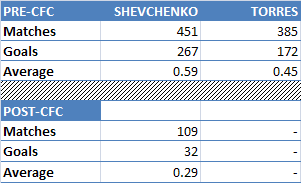 Both strikers came with a giant price tag and after a long courtship with Chelsea/Roman Abramovich. They had both been successful prior to Chelsea, at one point or another each one had been considered the most feared striker on the planet. Shevchenko even won a Ballon d'Or.

That all changed once they pulled on the Blue shirt. Whether that was due to just a natural decline in ability (due to age, injuries, moon cycles, etc.) or the presence of a certain Ivorian or a combination of a bit of everything is debatable. The fact remains that Chelsea's return on these purchases has been quite dire.

Luiz Felipe Scolari loaned Shevchenko back to AC Milan (and soon-to-be Chelsea manager Carlo Ancelotti) after 24 months of failure, while at the moment Torres looks set to stay and lead the Chelsea line after 18. Let's all hope he fares better than the zero league goals that Andriy netted during that loan...

So that all makes for pretty sad reading. To cheer you up, here's a kid celebrating Shevchenko's second goal: