So where do we play Ramires next year? Here's what you said...

Share All sharing options for: So where do we play Ramires next year? Here's what you said...

Several days ago I put a question out there for you guys to answer. I asked how comfortable you'd be with Ramires playing in a variety of different positions. I left the questionnaire open for a few days, and you guys responded by providing me with a little over 1500 responses. With such an overwhelming response to the poll, I think it's fair to say that we have a pretty decent sample in which to assess the feelings of the community at large. Sample size will not be an issue.

Going into next season, I firmly believe that Ramires may be our most valuable piece due to his talent and his versatility. In my opinion, his ability to play any number of positions well leaves us with the option of targeting the best talent available as opposed to trying to plug specific holes. While we finished the season in a 4-2-3-1, I feel that having Ramires allows us the freedom to go into next season with a clean slate as far as our primary formation is concerned. I think he could fill any number of holes in any number of formations, and judging from the results I'm not alone in that regard. Knowing my thoughts already, I picked 10 roles in which I believed we could use Ramires and asked you what you felt about each one. The results can be found in graphical form after the jump.

First and foremost, What roles did I give you to choose from? I asked about Ramires on either wing, at either fullback position, and as a wide midfielder on either side. I also gave you 4 central midfield roles in which we could realistically slot Ramires. Those 4 include playing as a lone holder, as part of a double pivot, in a box to box role, and "in the hole". I took all 1542 votes and averaged every response. With the scale being 1 as the lowest and 10 as the highest level of confidence in Ramires at that role, here is the summary of your responses. 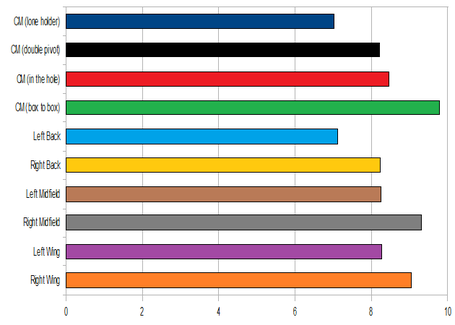 I really thought that we as a community were fairly confident in Ramires and his versatility, but the responses on the whole absolutely blew me away. As you can see, left back and as a lone holder were the only 2 positions in which Ramires didn't average at least an 8, and even both of those finished with him averaging a confidence level of over 7 on a scale of 1-10.

In the end, there really aren't too many conclusions to be gathered from this beyond the fact that we all like Ramires a lot. None of us work in the Chelsea coaching ranks (or at least I'd assume that's the case), so our confidence in Ramires to play any of these roles likely doesn't mean too much in the grand scheme of things. What it does say to me, though, is that most of us wouldn't be too concerned about any particular signing shutting Ramires out of the squad entirely, as his versatility is something we're clearly comfortable with on the whole. Discuss...