Six Chelsea players were in action during the first round of the Euro 2012 group stage. While Raul Meireles and Petr Cech suffered defeats (one narrow, another not so much), Fernando Torres, John Terry, Ashley Cole and Florent Malouda saw their respective national teams settle for a draw. A recap of their performances so far after the jump. 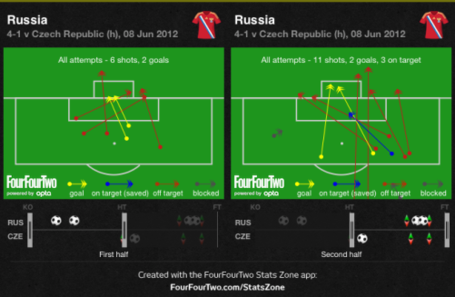 It was not a fun day at the office for Petr Cech mainly because his co-workers were being extremely incompetent, especially those with the task to defend, in their 4-1 defeat. Czech's poor pressing game left them exposed in the back. Russia's attack found all kinds of gaps between Czech's defensive lines and created chance after chance with precise one-touch passing. As they chased the game, Czech pressed higher and committed more players forward, leaving wider gaps in defense for Russia to exploit. Almost reminiscent of (and I apologize in advance for bringing it up) the Chelsea 3-5 Arsenal game.

What you have above is the chart of all the shots hit by Russia in each half of the game. Seventeen in total; fifteen of which came from inside the box. I don't know about you but I think as a general rule one should let the keeper off for conceding a couple of goals when his defense allows the opposition take 15 shots from inside the box. Now, it is true that all four shots that went in were not perfectly placed into the corners of the goal, unreachable even by Cech's tall frame. But they were also hit with ferocious speed. They may all looked savable in slow-motion replay but the real damage was done -- the lack of marking, blocking and covering -- prior to the shot was hit. Cech might have done a bit better (only a bit) with the last two goals but overall I just feel bad that he had to put up with the kind of defense he had in front of him. Cech has nothing to prove in terms of his ability; we all know that he's a great keeper when supported by competent defense (see 2011-2012 Chelsea cup runs). 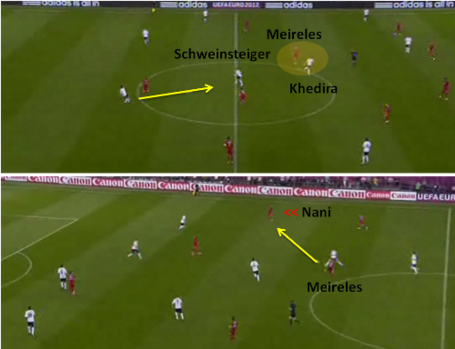 His team may have lost their first group game against Germany but Raul Meireles had a decent game doing a lot of defensive work in Portugal’s midfield. Within Portugal’s counter-attacking 4-3-3 formation, Meireles primarily played on the right of the midfield inverted triangle alongside Moutinho and Veloso. Since Germany operated with the double pivot of Schweinsteiger and Khedira in central midfield, Moutinho and Meireles were on duty to mark these two German midfielders.For the majority of the game, Meireles worked diligently to mark, cover and track one of Schweinsteiger or Khedira. If you look at his defensive stats (tackles, interceptions, etc), you won't find much. That is not because he had a bad defensive game, but because he was usually in the right defensive position, eliminating the need to go into challenges and tackles.

His good defensive positioning owed a lot to the fact that he was not asked to bomb forward and join the attack. His job was to shield his defense and to make simple delivery to the likes of Ronald and Nani who were in charge of the attacking duties; he didn't need to dribble or make 40-yard passes. In fact, the only time he got caught out, and had to foul Khedira consequently, was when he went forward on the left wing and had to run all the way back to his midfield position. All in all, it was a good defensive performance from the Portuguese. 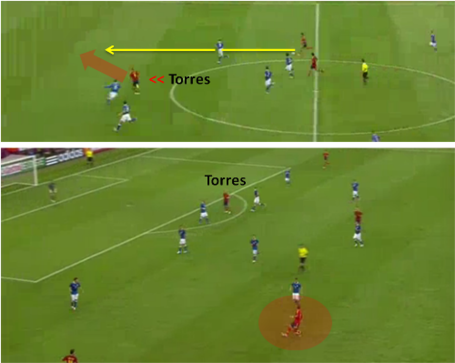 As you all know, Spain started without a traditional striker, instead opting for Cese Fabregas as a false nine. Spain were able to dominate possession (Surprise, surprise!) but failed to create clear-cut chances. The likes of Iniesta, Fabregas and Silva buzzed around in the zone in front of the Italian back three without really troubling Buffon. There was no focal point in their attack. That was until Fernando Torres came on with about 15 minutes left on the clock.

The striker was in action immediately -- beating Italy's offside trap and running in behind Italy's defense. His attempted dribble (kind of like the one that got him past Victor Valdes in Camp Nou) was cleverly tackled by Gigi "I-Am-Not-Valdes" Buffon. When Spain is in possession in Italy's half, Torres pushed up right against one of the Italian center-backs and looked to get behind them, adding a different dimension to Spain's attack which only looked to drop back before Torres came on. It was a decent performance by Torres but his first touch and finishing need to improve for him to be a real goal threat. 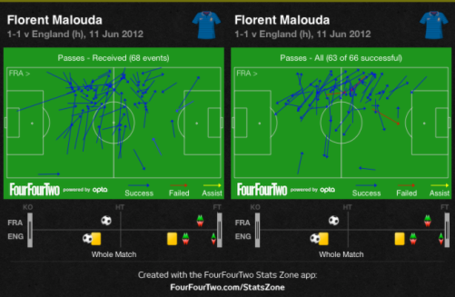 I've written about Florent Malouda's role in France's 4-3-3 before and that's basically how he played against England. He operated on the left side of the inverted midfield triangle behind the front line of Ribery, Benzema and Nasri. He played mainly a facilitator -- providing short and simple passes to his more attack-minded teammates (kind of like what Meireles did for Portugal with less defensive burden).

As his passing charts (received and made) reveal, Malouda was ever present on the left side to receive a pass before quickly passing it on to facilitate the play. In fact, the most common pass combination in this game was Evra-to-Malouda (22 times). While Malouda didn't have much of an attacking role, he didn't have to do that much defending either; this was mainly because Steven Gerrard and Scott Parker didn't push forward often. Malouda was dependable but not likely to spark any attack by himself. When his front three penetrate their opponent better, Malouda will also look better -- arriving late to finish chances off and so on. 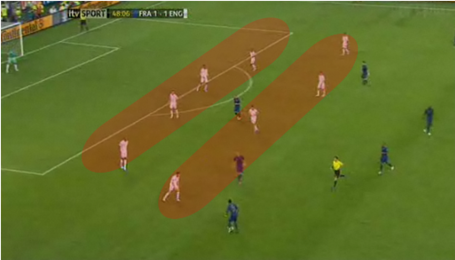 England defended the three-pronged French attack with two banks of four -- shifting between medium block and low block. John Terry started as a right center-back, allowing the left-footed Joleon Lescott to play on the left. This in and of itself is a credit to Terry who is a two-footed defender (even some of the most lethal strikers can't use both their feet as well as the Chelsea captain can).

Overall, Terry was solid defensively. If you read his individual stats sheet, you will find that he made the most interceptions (5) and made the most clearances (8) in the England team. Both Terry and Lescott were very good at dealing with Benzema, who moved around all over the pitch, either dropping back slightly or moving wide, and Ribery and Nasri, who kept popping up between the lines. At the end of the day, you defend as a unit and Terry operated smoothly in that defensive set-up. 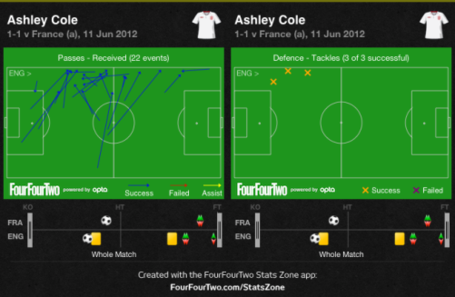 As Cole's "Passes Received" chart suggests, this was not a typical flying-down-the-flank performance from the Chelsea left back. This was mainly due to England's conservative approach to the game. Ashley Cole stayed back to guard the attack of Nasri/Ribery/Debucy the left side. The fact that the majority of the French attacks threatened the right side of England's defense is a testament to Cole's good work -- marking, pressing, tackling and interption -- on the left side. It was a good defensive performance by Cole for a team that didn't utilize his attacking abilities.

How satisfied are you with the performances by these Chelsea players in this round? And what do you want to see more/less of in the next rounds? The comment section is yours!