We had a FanPost a couple days ago from a fellow SB Nation Blogger (on a side note, I think 'Bitter and Blue' might have to undergo a similar name change as 'We Ain't Got No History'), which broke down the minutes played by our players in the Premier League. This then is an addendum/expansion on that idea. Credit to 'theRamster' as well for his "bench-time" idea.

In case you're lazy:

A few caveats/assumptions: I only looked at outfield players (the goalkeeper situation is pretty boring and obvious); I realize that the 'Not Selected' count will be wildly skewed for players who left or arrived at some point during the season; the total minute count is an idealized 90min/match (or 120 in case of the four that went into extra time) - this means that a 90+ minute sub receives 1 minute of playing time credit, while the player subbed off receives 89 minutes; the total count is slightly different from when I posted in my comment in the FanPost because I switched data sources from Soccerway to TransferMarkt.

Without much further ado...the numbers do speak for themselves: 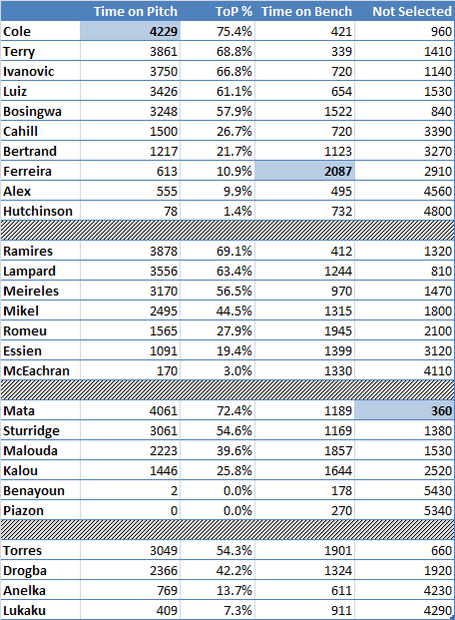 Interestingly, there are exactly 10* outfield players (+ Cech, clearly) who have played a minimum of half of all available minutes and they could line up in a serviceable, if very offensive 4-2-3-1: Cech - Cole, Terry, Luiz, Ivanovic - Lampard, Meireles - Sturridge, Mata, Ramires - Torres. I do not think we lined up like this once all season!

*EDIT: Yep. Turns out I can't count. There were 11 outfield players with 50+ ToP%. It seems that I tried to repress Bosingwa.

Let's see how this looks in a graphical form (clicking on it will probably make it remarkably more readable): 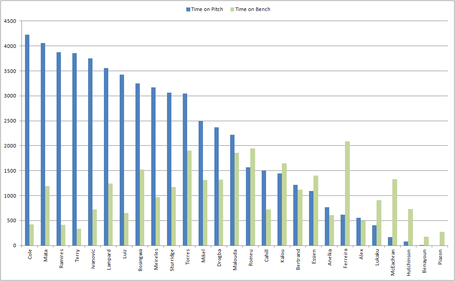 I honestly don't remember Lucas Piazon being on the bench three times (Swansea away; Man Utd & Blackburn home) and I find it very sad that Salomon Kalou got so little playing time (despite his atrocious early season play). Similar sentiments could be shared for John Obi Mikel, especially in light of spectacular displays under Roberto Di Matteo. We played Jose Bosingwa a TON!

If we stack the time spent on the bench (which, as alluded to earlier, is simplified a bit to also include time left in the match after a player was subbed off or sent off), we find that our total minutes leader Ashley Cole falls to just 5th place. 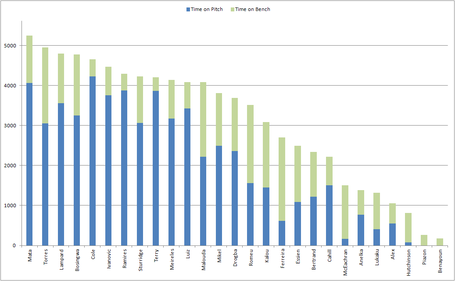 Juan Mata is the only player to rise above the 5000 "match-day minute" level...even more impressive considering that he hadn't even signed in time for our first two Premier League matches...

I wonder why Ramires had so few appearances off the bench - I suppose he did have a couple minor injuries, which limited his total available minutes. Of the regular starters, only John Terry had fewer.

This should be very interesting to compare with next year's statistics.