Chelsea lifted the FA Youth Cup for the fourth time on Wednesday evening at Ewood Park. A 1-0 defeat in the second leg away to Blackburn did little to dampen the mood - well, for most involved at least (see manager Adi Viveash's post-match interview with Chelsea TV) - after a wonderful opening leg left Chelesa in an almost insurmountable position. 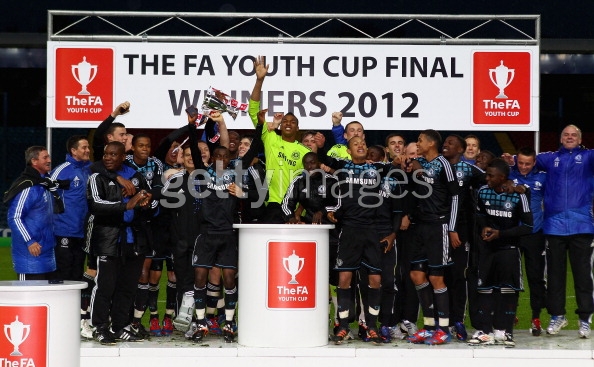 That's two FA Cups in three years for the Under 18s, who set the table for this triumph with a 4-0 dissection of Blackburn at Stamford Bridge in the first leg. This youth setup is beginning to take on the look of an elite product, eh? Hell, we are an elite product.

Wednesday's second leg was hardly elite, however, with Chelsea failing to look particularly great on either end of the pitch. In fact, it was all a bit unorganized and sloppy. Some of that may have had to do with the sloshed conditions, but that's not really an excuse.

Blackburn, as was always going to be the case, pressured far more and carried the play for most of the night. The hosts grabbed the only goal of the match midway through the first half thanks in large part to a slip from Archange Nkumu. Tim Payne took advantage of the unfortunate gaffe, and Blackburn looked to be in a position to cause us some problems.

Not exactly. Chelsea, despite still not carrying much of a threat, improved and Blackburn, well, it never looked like they were going to get anywhere close to overturning the massive deficit in front of them - even if they nearly managed to add another goal, denied by a wonderful tackle from the solid Todd Kane. Of the Chelsea players, Lucas Piazon particularly caught the eye. His awareness and vision when on the ball were most impressive.

Also of note were a couple of wretched challenges from Blackburn. Both could have been red cards, but whatever. Anyway, Chelsea saw out the rest of the match and then promptly went to the stage and collected the silverware. Well done to the young ones. Add in the fact that a vast majority of this team will be eligible at this level next year, too, and the future looks massively promising.

Oh, and Roberto, get Piazon some time this Saturday if you don't mind.