And so it goes, as per the schedule, that we are to do battle once more with Liverpool. In fairness, I could do without this routine of exercises, particularly after our weekend triumph. But the schedule is what it is, and we have a trip to Anfield on the books. So lets make the most of this then, and at rub some additional salt in those wounds. More, after the jump: 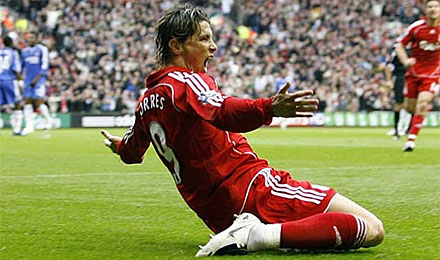 The Return of the King

It might be true that Luis Suarez is the new man about town, but the specter of Fernando Torres remarkable run in Red looms large over a franchise mired in mediocrity. Sixteen months ago, Fernando elected to swap shirts in what has become a rote exercise in journalistic futility- he's an expensive flop, he's not worth the money, he can't score goals, and so on and so forth. Lost in the haze of stories, is the fact that Fernando's departure was supposed to be buffered by the introduction of Suarez and Carroll- the new way forward under Kenny's reign. But someone didn't get the memo, and while Fernando's taken his sweet time to come good (he has) Carroll continues to struggle to get his game back on track. Still, tomorrow is less about individuals and more about the teams, but would it really surprise any of us if Fernando gets a start, and a goal? On to the specifics:

Why: While not mathematically out of the hunt for fourth place, I'm going out on a ledge and saying with certainty that we're not making that jump. Not with Newcastle getting their win in midweek. So then, what's the purpose of winning? For Fernando. This is his first trip to Anfield since joining Chelsea, and it would go a long way to exorcising the demons of his past for him to start, score, and walk away victorious. I've read the extended reports confirming that he spent some time in the visitors locker room after the FA Cup triumph on Saturday, suggesting that despite many's desire to vilify him, at the core Fernando remains a good dude. He's getting his mojo back, with goals starting to flow in spades (currently he has 11 goals, and 13 assists in all competitions). That QPR hat-trick isn't a far-off memory for him, and I can guarantee he'll be out there (if he gets a start) running his socks off looking for goals. Lets do it for him- get a win, further extend the misery of Kenny's campaign, and build some further momentum heading into the weekend's final PL match (and perhaps further fuel our intentions for closing out the year with a victory in Germany).

Them: I'm not doing this again. No really, I just don't want to. You already know what you need to by now, they're a team lacking any semblance of identity. Expect Andy Carroll to get a start after his FA Cup heroics, and expect Jay Spearing to find a seat on the pine. Elsewhere, I'm not sure how Kenny shuffles the deck, or if he even does at this point. Liverpool might not have much left to play for but pride, and therefore will likely field the strongest possible side to get them out of their atrocious home form at the moment (no wins since March at Anfield). Here's hoping we can extend that misery for just another week.

Us: Clearly, some of our folks have enjoyed their partying. Ruled out for tomorrow are David Luiz and Gary Cahill (though both are on the mend and will likely be ready for Munich), while John Obi Mikel and Raul Meireles will not be risked having picked up minor injuries over the weekend. That leaves us a touch depleted in the middle of the park and at the back, but I fully expect Chelsea to have enough left in the tank to get a result. Di Matteo will likely have to introduce Michael Essien into the mix, but otherwise, should be able to field a similar team to the weekend (save for Fernando taking Didier's starting spot). 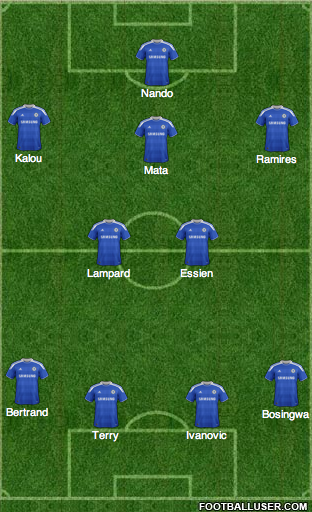 That's how I see it. A start for Ryan Bertrand isn't totally out of the norm, and our Champions League banned folks (JT, Ramires, and Ivanovic) continue to play going forward. Also, please, can we get Lukaku on the bench and possibly a substitute appearance tomorrow? Perhaps after Fernando nets a goal, he can get substituted, and his deserved applause (unlikely) before unleashing the Belgian beast? Moreover, how about resting Frank and giving Oriol another crack in the middle of the park? Not unrealistic when you consider how Roberto likes to freshen up the side. Just doubting that Daniel will get the nod on the right (his form truly has dwindled in recent weeks despite that QPR cracker).

That's all I got for now friends. Rough week in the office- no time to spare. Carefree.