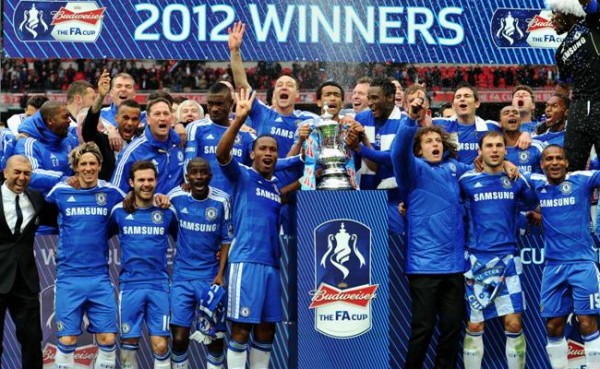 Two days later, and I'm still high on life. I suppose it's a normal reaction to Chelsea's latest trophy, a fourth FA Cup in six seasons. Or maybe it's more a cathartic release of pent up frustration culminating in this other-worldly state of euphoria. Or something. Whatever it might be, it feels pretty awesome to be champions in a competition that seems to be our proving ground. That our victory came at the expense of Liverpool makes it all the more savory. Ultimately, this season will be defined by more than one successful trophy run. Chelsea still have a mountain to climb in Munich before judgement can truly be rendered. Still, winning the FA Cup is a healthy reminder to us all that this squad still has the requisite mettle to accomplish its objectives.

The match was, in short, a tale of two halves. Chelsea dominated early and often, with Juan Mata capitalizing on an error in midfield by Jay Spearing to release Ramires with an inviting pass forward. The rest, as they say, was history. Ramires exploded past Jose Enrique and fired a low drive at Pepe Reina, who helped guide the ball past his near post. 1-0 Blues was how it stood, and would be at the half, with Liverpool failing to cause much of a problem, or manage to hold onto possession for more than a fleeting second. The second frame began with much of the same, and came to a boil when Frank Lampard turned the Liverpool defense inside-out and found Didier Drogba, better known as the King of Wembley, to bury a shot with his 'weaker' left foot. 2-0 and everyone figured that would be that. Wrong.

Enter Andy Carroll. Yes, you read that correctly. It would appear that oaf of a striker, who mind you seems to have shed a few pounds, would enter the fray and cause havoc. His introduction brought about a renewed sense of purpose, and Liverpool capitalized off a Jose Bosingwa error, with the ball landing at Carroll's feet, who did a bit of an Irish jig and made John Terry look foolish, before blasting a left-footed strike above Petr Cech. 2-1 and suddenly the panic took hold. In the remaining 30 minutes, Chelsea looked lost. Unable to clear their lines, incapable of holding onto the ball for more than a second, hoofing it forward to Didier in the hopes that he could create something- it was a drab experience. Carroll would be at the center of the storm once again, in the 82nd minute, with a header that on first glance appeared to cross the line. But alas, it didn't! That magician between the sticks, Petr, managed to claw the ball upward, preventing the whole of it to cross the line- and you know Liverpool protested in tandem. Still, the goal was not awarded, and Chelsea managed to see the match to the finish. 2-1. Done and done.

As for the celebrations? They were wonderful and legendary and awesome and fantastic. One of the brilliant wrinkles of the New Wembley is that glorious march up the rafters, through what looks like a parking lot, to the stadia's upper-echelon, wherein Chelsea were able to lift the trophy with plenty of verve. Deserved. There were celebrations on the pitch as well, with our walking wounded joining the fracas, and Jose Bosingwa getting into the middle of a circle and doing some sort of dance. Weird, but I'll take it. Elsewhere, Michael Essien donned a blue wig, John Terry inhaled Budweiser, Bane went for a joy-ride in a bucket of ice at the behest of Danny Sturridge, and Obi Mikel decided it would be wise to assault Sala for his medal. Altogether now- weird, but I'll take it.

What this result means for the Di Matteo regime? Hard to say just yet, but it clearly didn't hurt his chances of landing the job on a more permanent basis. He remains one of the rare individuals to have hoisted the cup as both player and manager. Didier Drogba took his Wembley tally to 8 goals in 8 matches on the ground. Ashley Cole set the record for 7 FA Cup victories as a player. John Terry became the first player to lift the trophy 4 times- as a Captain. Oh, and Petr Cech extended his FA Cup lore by continuing to be undefeated in all his outings. Read that last sentence again. Cech has NEVER lost an FA Cup match he started. Glorious.