The end is near. An FA Cup Final beckons, with the promise of a hotly-contested affair against those northerners. This one, friends, is for all the marbles. More, after the jump: 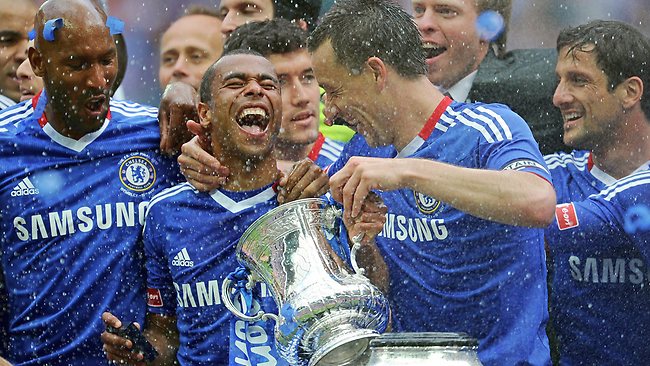 Lets do it again

As the season draws to a close, we're presented with our first genuine opportunity at claiming silverware this year. Chelsea will go to war with Liverpool, who've had mixed success this year. Despite playing poorly on the domestic front, the Reds boast a Carling Cup trophy for their troubles- something Chelsea will be desperate to replicate tomorrow. Liverpool have lifted the FA Cup on seven occasions, the last of which occurring in 2006, while Chelsea have succeeded a total of six times, most recently under Carlo Ancelotti in 2010. It's no secret that our clubs have a deep-seeded hatred of one another, and our recent transfer history with Liverpool will further fuel the fire of discontent heading into Wembley. Back in the day, this tie was Jose vs Rafa, John Terry vs Jamie Carragher, Frank Lampard vs Steven Gerrard, Didier Drogba vs Fernando Torres. Much has changed since, with Jose and Rafa departing, and Fernando switching sides. But the history our clubs have shared in hotly-contested match ups remains to remind us all of what once was. Tomorrow, will be electric. On to the specifics:

Why: Quite simply, because we need this. We have two real chances at claiming trophies this season, and this would likely be the easier of the two campaigns. A win tomorrow would grant John Terry a stay of execution from those seething at his mindless antics that cost him a place in the Champions League Final. It may well also be the last time our merry band of warriors get a crack at a trophy under the Wembley spotlight- together. We all know that this summer presents the very real prospect of losing a number of our former key players. If this is to be the end, then what a way to go out in style. For Didier, the boogeyman of Wembley, another goal would be just the icing on the cake necessary to send him off in style. Moreover, a win tomorrow might go a step further in securing Roberto Di Matteo's chances of landing the gig on a more permanent basis- perhaps finally dropping the interim tag from his nameplate once and for all. With the club pressing forward with plans for a new stadium with the expectation that resistance will be met from all angles, it is important to lock down Robbie's status so as to know who will be responsible with steering the club forward. Winning the FA Cup might not seal the deal, but it could do just enough to swing those remaining votes in his direction. Plus, we need to come back strong after that relative no-show against Newcastle in midweek. We might have harpooned our chances at securing fourth place, but we have enough quality left in the squad and tank to come out and lay a marker for our intensions with a strong display.

Them: Ugly wouldn't do it justice. To say it's been difficult would be putting it mildly for Liverpool and its rabid fan base. A summer spent acquiring English talent (Stewart Downing, Charlie Adam, Jordan Henderson) to pair with stalwarts like Luis Suarez and Steven Gerrard hasn't exactly translated into immediate success. One of the more shocking aspects of Liverpool's decline this season has been their atrocious home form at Anfield, what used to be a menacing fortress. Their last win in the Premier League at home came on March 18th- yikes. But you can put some footnotes on this season, for sure. Losing the services of Luis Suarez to the racism-row was a big blow, with Andy Carroll never coming into form during Suarez' exile. Steven Gerrard has been in-and-out of the squad all year, while a number of influential players have either watched their form drop, or succumbed to major injuries (Lucas). Elsewhere, the new guys haven't exactly lit the league up- with Stewart Downing in particular demonstrating this ineffectiveness with his inability to provide a single assist in the league all year. Turrible. When it's worked for Kenny, it's looked brilliant. But those moments of success have been brief flirtations with what once was- the team is no longer the powerhouse it used to be. With a style that caters to the individual excellence of Suarez, Liverpool are no longer the well-oiled attaching menace they once were. That said, they have shown in this particular competition a willingness to scrap, fight, claw, and punch for glory. Winning the Carling Cup on penalties to Cardiff City might not have been the ideal method of success, but no one can subtract that trophy from the history roll. They know that their only hope of salvaging some pride from this campaign is to win tomorrow- it's all that's left for them to play for. That's where we come into the picture to attempt to rain on their parade.

Us: A midweek no-show against Newcastle. What I wouldn't give to wipe that memory from my mind. Sure, Liverpool had a 0-1 result against Fulham as well, but they rested eight players with tomorrow's match in mind. Robbie also rotated the mix, but had to bring the big guns in to try and chase a result at the death. It didn't work out and now we stand on the ledge preparing to go to battle once again with an almost complete squad (minus the services of defensive trio Gary Cahill and David Luiz). Both Luiz and Cahill are on the mend and will begin training with the first-team next week with an eye on the Champions League final. Otherwise, the squad is relatively complete and filled with selections for Roberto to consider- most notably in attack. To continue the tradition of success in this competition, and to reclaim our mantle from Manchester City who rose up and won the title last year, we need a comprehensive display not unlike our showcase against Barcelona- mixed with our attacking verve from the QPR fixture. I know, I'd love to see Fernando get a start and goal tomorrow, but really, this is Didier's kingdom to pillage. Wembley is his ground (he's scored seven goals in seven fixtures at the spot). So lets be real, he's going to get called upon to start from the jump, and none of us should have any complaints really. Plus, the idea of him running at Jamie Carragher has me positively giddy. Lets see if he can put Jamie in his pocket like he did to old Billy Gallas. 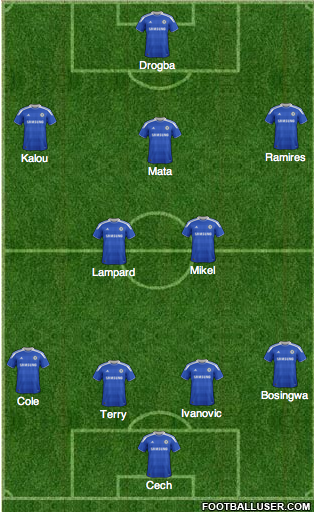 Look guys, I'm not at all opposed to Fernando getting a start. It would be lovely if it was him who scored the winning goal tomorrow- but I have to be realistic in assuming that Roberto's going to be saving Fernando for either an impact sub spot, with an eye toward next Tuesday's trip to Anfield. Certainly there Nando will get a full 90, and the vitriol of all those in Liverpool that curse his name after swapping clubs. Either way, this lineup selection almost picks itself. The preferred selections of Robbie, the most complete lineup we can offer, and the usual spine we've come to cherish on display. The parts where we have to worry are at the back- on the right especially. Bosingwa showed a lot of steel when he was moved inside to parter John against QPR, but seems to struggle when he's deployed as a wing-back. Bane is going to need to be on his game in helping out and tracking back, and most importantly, patrolling against the likes of Suarez and Carroll. Typically Chelsea have a tremendous height advantage on set pieces- but without the services of Cahill and Luiz, we're a touch light in that area. Nevertheless, the gameplan has to be simple and precise: control possession, play narrow, and get the ball up the pitch to Didier to use at his discretion. Also, it will be important to see how involved Juan Mata is in the action- against Barcelona he never really got his mojo flowing. Here, he might have enough space and time to pick out his passes- which we all know are deadly when he gets it right.

According to my research, Liverpool have failed to win the FA Cup in three previous outings when they've beaten Everton in the semi-final. Here's hoping we can keep that streak alive tomorrow- while giving in a comprehensive display that earns Roberto his first trophy as a manager and enough clout to at long last secure the long-term contract he fully deserves. Lets send Didier off into the summer with a strong showcase, lets let John lift one before the season ends, and lets get this in the bag, some momentum flowing, a Fernando goal, and an overall thrashing of Liverpool under our belts before we close out the campaign and set our sights on Munich. A win tomorrow, and I can see us getting the job done in Germany. A loss? I'll worry aloud. But before we get ahead of ourselves, lets just focus on the task at hand- a Liverpool side that will be revved up and ready for a performance, and a Chelsea squad desperate to set the record straight and mark their intentions for the close of the year. It will be fun, and you can bet I'll be nine beers deep by halftime. Lets have it then.

The magic of the FA Cup. Carefree, lads.