We kenw it was coming today, Didier Drogba always scores at Wembley. Today would be no different, as the eventual FA Cup winning goal was finished off by the big Ivorian. The buildup to this one was incredibly simple, but as with so many other Drogba goals this season it was due to textbook positioning before the pass was ever played that created the space to shoot. Let's break this one down and have a look at how this one happened.

We'll start our look at this goal where John Obi Mikel brings the ball into the attack. You can see Drogba circled up front, spaced between the two defenders on the right side. As Mikel advances forward, Frank Lampard positions himself to receive the ball. Drogba sees the play developing and reacts accordingly. Hit the jump to check out the overhead view... 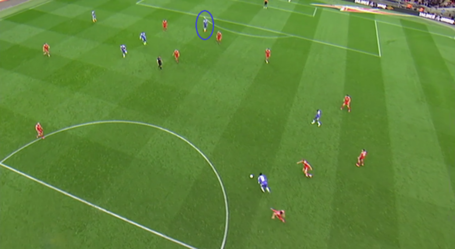 Drogba now does what has become a trademark for him, positioning himself on the shoulder of the centerback. You can see Lampard is receiving the ball, and Drogba is already putting himself in a position to dictate where Frank will look to play the ball. From Lampard's point of view he's simply got to round his marker and he'll have a huge channel to drop the ball into. Our midfield is plenty creative when they can correctly predict where their teammates will be. 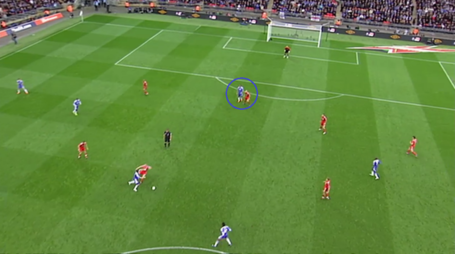 As Lampard looks to play the pass, Drogba pushes away his defender to create a space between the two players. Lampard has a huge channel to pass the ball into, making it an easy pass to complete. 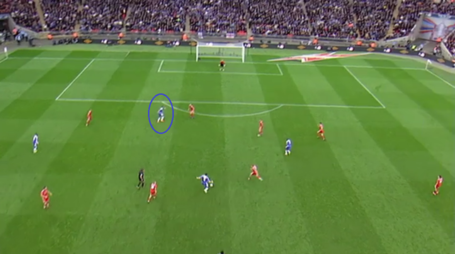 As the pass is coming in, we saw Drogba take a touch that allows the ball to roll across his body. This sucks Reina closer to the near post and sets him up with a left footed shot. The defender is rushing back to attempt a block and looks to be under the assumption Drogba is going for the near post. The ball is calmly slotted between his legs as he rushes past, and it then rolls easily into the far corner. Chelsea now had the cushion that would ensure their one year trophy drought came to an end.

This was yet another example of Drogba anticipating where the service would come from and positioning himself to take advantage of it. While his big games are coming far less often with his declining physical tools, his uncanny ability to position himself perfectly should allow him to be a useful player for several more seasons. Well done Drogba, well done indeed.