Note: This post is obviously at least partially motivated by the fact that adidas were kind enough to involve me in the new Predator launch and send me home with said Predators and assorted swag. Pretending I'm not influenced by that would be silly, but at the same time, I'm not going to write nice things about them just because they're nice to me. I'm no corporate whore*!

As most some two of you know, in addition to writing about football, I sometimes play football as well. This means that I am uniquely qualified to talk about football boots. And if you don't believe me, ask adidas, who were kind enough to invite me to Manchester for the launch of the adidas Predator Lethal Zones, which I am going to refer to as the Predator LZs from now on because haha I'm not typing that all out more than once.

Anyway, the Predator LZs were officially launched on Tuesday, and adidas have gotten into the habit of involving bloggers in said launches, which is pretty cool. I ended up getting enough time in them doing skill challenges that I feel pretty happy writing up my first impressions. I'll talk more about the challenges and such later on in the post, but I figure a review's what most of you are here for. 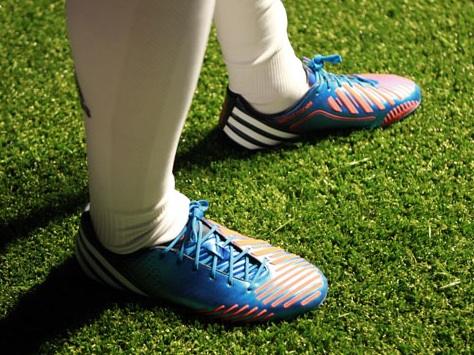 The Predator LZs represent a generational shift as far as the Predator line is concerned. No matter how they tried to dress things up, last year's adiPowers were about taking weight off and changing the aesthetics of the line. This is different.

Right now I'm holding my adiPowers. They're clearly designed for shooting and long-range passing - there's one shot plate on the instep and although the material works for controlling, passing, dribbling etc, the design doesn't emphasise the things you expect to do most in a football match. I love shooting as much as the next guy, but for me the drive plate on the adiPowers gets used once every twenty touches at best.

That turns out to be true of most footballers, so adidas have opted to turn the Predator into an all-purpose boot that tries to help out with every aspect of a footballer's game. It's not a perfect implementation, as far as I'm concerned, but it is a huge upgrade on the adiPowers all the same. You can get an idea of what adidas was going for with the handy infographic below (click to embiggen):

Yep, this is a miCoach enabled Predator with new upper material, a different outsole design and five specific zones. That's great and all, but I assume that you all want to talk about the actual implementation of the boot. Does it work?

Let's start with the Lethal Zones, since they're so central to adidas' vision of this thing. We've got Drive, Pass, Sweet Spot, First Touch and Dribble, and if you held one of these in your hands you'd realise just how much engineering work's gone into each of them. They counts for nothing if they don't help much though. Here's my first impressions of the zones (played using the new Tangos).

All in all, I'm a fan of the zones, but it's absolutely obvious that a mass-market boot like this is a compromise between many different styles. If I had my druthers, I'd come up with a different configuration, but many would disagree with me, and adidas is designing a boot for everyone rather than just me (although if they wanted to do that, that'd be super). Given that, I have zero problem with the placement of the zones, and three out of the five get a big thumbs up in terms of performance from me. The only one I didn't get that was not a stylistic thing was First Touch.

There are some other major changes as well. The outsole now the same as the one used in the adiZero, which means studs rather than blades and a lighter construct as well. The heel protection has moved from the outsole to the upper, which is solid but far less sturdy than the old frame. For me, I like playing in studs far more than blades, although I have literally no idea why, and therefore this was a positive move.

The upper was a concern for some folks - adidas have moved onto a synthetic material that they're calling 'hybrid' leather, and previous attempts at synthetics have resulted in a significantly less comfortable feel (like the adiZeros!). Well, I have good news - the new material isn't quite as nice as leather, but it's pretty close and comes with the added benefit of drying really really fast. I should know, because I accidentally stuck my foot in one of the dribble jets*, which got me rather wet for a while. It's also easier to put on and seems to fit better.

*I was told not to refer to them as 'fountains' because that didn't sound intense enough, and my request that they be renamed 'super water orgasms' was met with a stony stare.

As for the overall look... well, it's certainly striking. I like it ok, but I'd rather have an all-white or all-black colourway, because I am now a boring old man. Clearly, adidas think that a flashy boot is important in attracting an audience, but I'm not really part of that audience so whatever. Tom Cleverley loves them, and that's what counts. If you don't, adidas have traditional colourways out in fairly short order.

Weight-wise it's actually about 10g heavier than the adiPowers and significantly heavier than the latest edition of the adiZeros. My impression is that they had to give up a little bit of weight to increase the durability of the bond between the zones and the upper, but at 8oz. or so it's hardly a very heavy boot, and if you're upgrading from a 2010 or older Predator, which were notoriously heavy, the difference is shocking.

I'm obviously nothing like a regular boot reviewer, so I can't compare these to other top of the range products, but I came away incredibly impressed. These are going to be my first-choice boots for at least the rest of the year.

The bloggers invited to the launch got to sit down and spend a lot of time with Aubrey Dolan, the project manager in charge of the Predator LZ. Getting an inside look at the two-year design process was interesting enough that I feel like sharing it.

The goal of the project was to find a boot that would legitimately improve a player's game, so the design focused on determining what players were looking to do with certain parts of their feet at any given moment. To that effect, adidas gave a huge number of players blank shoes and asked them to mark them up. Which were the most important areas, and why?

It's amazing to see what some of the players came up with. Xavi's was spectacular - he had three or four overlapping zones on the instep he'd use to play specific kinds of passes, none of which were bigger than a couple of inches square. I got to submit my blank boot as well, and if you've read my review you'll be completely unsurprised to find that there was nothing like the 'sweet spot' and a a huge shooting plate on the outside of the boot.

Obviously, players come up with many many different interpretations of what their Lethal Zones would look like and where they would be, so the shoe ends up being a compromise. Passing midfielders love the Drive and Pass zones, the Sweet Spot was heavily driven by Robin van Persie, and wingers would probably love it if the Dribble zone was more prominent. Given that, my guess is that the next iteration of those boots will probably move to a position-specific design (although when I raised that question Aubrey said he'd never even thought about it).

There are, of course, other design aspects to a boot than where the nifty rubber bits go - I was fascinated by how much work goes into the outsole design and stud placement. Not much has changed since last year, but the engineering work that goes into making a boot that allows for toe flexibility while doing its best to protect the metatarsals is very impressive.

And that doesn't even begin to touch on the material selection, lab testing and player testing that's involved in a project like this. Football boots are complicated!

This was fun. To demonstrate the capacities of the new boot, adidas set up a series of challenges, each designed to test on of the Lethal Zones. Since I'm lazy, I'll just give you the copy from the press release: 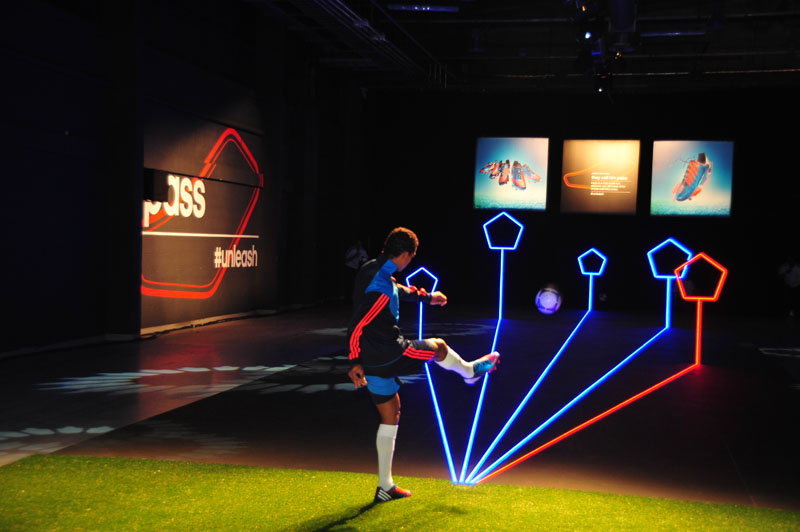 There's apparently some video footage of this (I don't know if I'm in it, but if I can find it I'll post), which is what I spent my Tuesday morning doing. I then got to watch the likes of Edin Dzeko, Tom Cleverley and Nani run the same challenges. They were quite good, as it turns out, although almost everyone found the passing challenge next to impossible, to the point that both Nani and Dzeko did worse than me. Tee hee hee.