Share All sharing options for: Snap Shots of Florent Malouda vs Serbia

With the signings of Hazard and Hulk looming in the near future, Florent Malouda's days as Chelsea winger might be coming to an end. But the French man showed his value as a left-sided midfielder in France's 2-0 victory over Serbia in a friendly game today.

Malouda played on the left side of the inverted midfield triangle in France's 4-3-3ish shape -- a position he occasionally played for Chelsea as well. With Ribery, Benzema and Nasri ahead of him, Malouda had more of a functional role than a creative one. He had a very good game ( and by game, I mean first half) and scored a screamer from outside the box. Some snap shots and notes from this game after the jump. 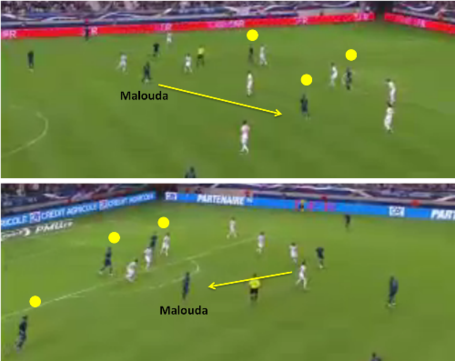 As the left-sided midfielder for Les Bleus, Malouda had three very reliable attackers ahead of him (two of whom, Ribery and Nasri, are very creative) and two dependable midfield partners Cabaye and Diarra. Compared to being a left-winger for Chelsea (4-3-3 or 4-2-3-1), he had less of a creative burden: all he needed to do was collect the pass from defense and passed the ball onto his friends with fancy-feet upfront to do the magic.

Additionally, with France's front three pinning Serbian defense (including Branislav Ivanovic as center-back) back very deep, Malouda had space to make late runs into around the edge of the Serbian box. That was basically how his goal came about -- picking up a lose ball about 35 yards out from the goal and using the movement of Ribery in front of him to strike a left-footer into the corner from outside the box. 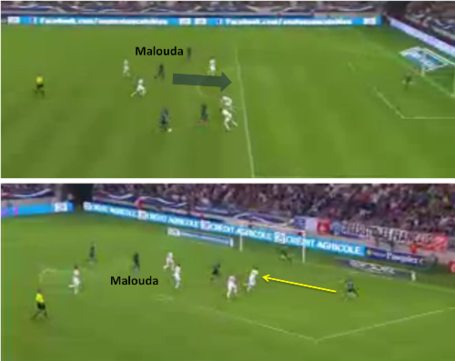 Of the three French midfielders, Malouda was the most adventurous -- joining the attack on the breaks and running into the box to meet the crosses from the wings. In this particular instance, Malouda released Ribery down the right before bombing forward down the center. Ribery's cross was nearly converted by Benzema as Malouda lurked near the far post. He also got a similar chance when he slid into Nasri crossed from the left; the effort was saved by the Serbian keeper.

In fact, Malouda's performance in the first half reminds me of Frank Lampard playing with Robben, Drogba and Duff ahead of him in Mourinho's 4-3-3 -- letting the skillful players do the creative work and pushing forward to add attacking threat.

In the second half, Malouda, along with his whole team, slowed down a bit, looking short from match fitness. His defensive work throughout the game was Okay but Serbia's attack didn't threaten that much.

It's great that he had a good game (he's a Chelsea player after all). But what does it matter that he performed well in a system that Chelsea aren't likely to play as they looked set on 4-2-3-1 shape? Well, first of all, after such a poor club season from the French man, it is just refreshing to see that he still has something to offer. Secondly, nothing -- from who the manager will be to what formation we will play -- is set in stone for Chelsea yet. Roberto di Matteo still might not get the job (somehow) and we might not totally abandon 4-3-3 just yet. Even with the likes of Hazard and Hulk coming in, there is no reason Chelsea can't play 4-3-3 at least as a Plan B. Thirdly, even if we indeed end up playing 4-2-3-1 as a default formation, Malouda could possibly refashion himself as a central midfielder (plenty of wingers have done that in the past), adding depth to our midfield.

I understand that this is all based on about 75-minute worth of performance a friendly game. But all in all, it was very pleasing to see a player who was so important for Chelsea under Carlo Ancelotti putting in a solid display.