Brilliant for the first six months, then anonymous after Christmas. It's a statement that could be made about a lot of the Premier League top performers this year, a list that includes Demba Ba and David Silva, and is as equally applicable to the curious case of Daniel Sturridge.

The stats are damming. If we take the turn of the year to be the midpoint of a season, Sturridge scored ten goals in the first half of the season in contrast to just two in the second half. However, Sturridge played more or less the same amount of minutes in 2011 as he did in 2012 - 1215 to 1049. There a number of factors to attribute to this, including the midseason change of manager, the need for more experienced performers and the re-emergence of Fernando Torres.

At face value, these explanations would seem enough to answer Sturridge's poor form. In light of Chelsea's recent and impending transfer activity, it seems an appropriate time to consider his long term future in regards to his role and position, especially in light of reports suggesting he is considering a move away from Stamford Bridge and given the results of Stephen's poll, which suggests a fair percentage of you are in favour of cashing in.

While it would be ideal to propose hypotheticals with the knowledge of who will manage Chelsea in 2012/13, for the sake of debate this piece will take the most likely scenario, which is that Roberto Di Matteo will be offered a new contract. 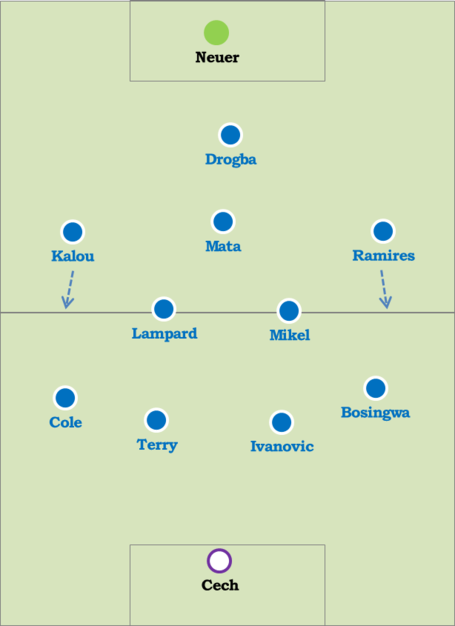 With this in mind, let's consider the Italian's presumable first choice lineup on the right. Di Matteo certainly prefers the 4-2-3-1 shape, using it in all but two matches of his tenure so far, with the only exceptions the two legs of the tie against Barcelona. While the spine of the side remains relatively self-explanatory - a simple back four screened by two central midfielders who are the platform for Juan Mata behind target man Didier Drogba, the complexities of Di Matteo's system lie on the wings.

In defence, both flanks are expected to drop and form a second back of four, yet in attack are expected to push forward and provide outlets out wide. This is a relatively rudimentary system that's come into great favor in the past few years, with a number of notable sides employing the basic principles, including Manchester United and will be the way England will set up under Roy Hodgson.

So where does Daniel Sturridge fit in? WhoScored tells us that he played 23 of his appearances on the right wing of Villas-Boas' 4-3-3, which revolved around pressing high up the pitch, a significantly different demand to that of Di Matteo's 4-2-3-1.

Herein lies the most obvious explanation of Sturridge's slide. Tracking back into a defensive role isn't one of Sturridge's key attributes - that kind of player is Salomon Kalou, as justified in his high number of starts under Roberto Di Matteo compared to Andre Villas-Boas. Another player who was in a similar predicament was Juan Mata, who was moved to a central position behind the striker.

This brings us to the broader point. In contrast to last summer where the signs were clear Villas-Boas saw Sturridge as his right winger, this year Chelsea's transfer activity clouds his potential role. There are lots of options, where the most popular (and most obvious) solution is to restore him to his favoured position as the centre forward. Given Didier Drogba's departure, this is a viable option, as the shortlist of proper centre forwards at Chelsea now otherwise contains only Fernando Torres and Romelu Lukaku. Another position for Sturridge could be behind the striker - he was excellent there in the final league game against Blackburn, and it was sort of similar to the one he played so well in while on loan at Bolton, playing off Kevin Davies. Another option for Sturridge is of course on the wings, and it's important to note that Di Matteo actually experimented with Sturridge on the left as well as the right, although there's no real evidence to suggest the switch of flank was any more effective for improving Sturridge's play.

In assessing his potential roles, it's also important to note just how versatile Sturridge is. Versatility is a crucial trait, and will especially be so in a squad with as much talent as Chelsea's looks to be next season. He may not be suited to Di Matteo's extremist incarnation of the 4-2-3-1, but he would certainly be more suited in a forward thinking Chelsea - something of which is entirely possible under Di Matteo, as his West Brom tenure indicates. Indeed, there's almost no way Di Matteo would be able to continue playing the same way as he did at the end of this season with next season's squad - Eden Hazard, for example, is simply not defensively nor tactically aware to fulfill a role in a wide position.