You may have pulled a Neviller, face (see below) or noise (see this), if you were watching live and witnessed that second Papiss Cisse goal. Fucking hell was that something else. Goal of the season, sure, but I reckon it's one of the best I've ever seen. 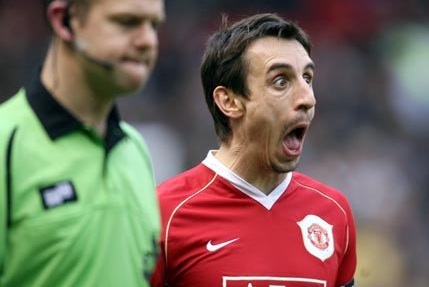 Needless to say, the January transfer window's greatest-ever signing (is this even up for debate?) stole the show at Stamford Bridge on Wednesday. His opener, about 20 minutes into the contest, was brilliant, too. But that second, my word. The Senegalese now has 13 goals in 12 appearances since joining Newcastle from Freiburg for about £10 million. Um, I think it's fair to say we could've used this kid's special kind of dynamism for our run-in. Yeah, I'm thinking we would do well to poach Newcastle's entire scouting network.

I kid, kind of. Speaking of Newcastle, well done. The Toon were coming off a 4-0 dismantling at the hands of Wigan, and very easily could have packed it in at that point. It has, after all, been a wonderful season for Alan Pardew and company. They could have settled for the Europa League, and who would have faulted them for it? That's an amazing accomplishment for a side that few saw challenging for a top-7 place (Not to brag but I did). Newcastle didn't, though. Instead, they regrouped and were much the better side at the Bridge.

The visitors were more aggressive; they were more menacing. They were just good. We struggled to contain their two-man frontline of Cisse and Demba Ba, who both drew a fine save from Petr Cech and hit the crossbar late in the first half. Their midfield overran us, thanks mainly to the force and finesse of Cheick Tiote. Tiote was dominant until his unfortunate removal midway through the second half after he was caught on the side of the head by a John Obi Mikel elbow. It was a scary incident, one that came moments after Tiote had grazed Mikel's nose with an errant elbow. Tiote was down for close to eight minutes before being stretchered off. He was, however, seen back on the bench near the end of the game, which is great news. Hopefully he's going to be fine, and hopefully Mikel's elbow was unintentional. Either way, I think the FA are going to have a look at it.

As for Chelsea, we weren't up to standard today. Much of that probably had to do with rotation of the squad, but it was still, for this set of players, a disappointing performance. Our midfield was far too reactionary and they more often than not found the game passing them by. Raul Meireles has done well enough for us this season, inconsistency aside, but the fact remains that he's not an everyday starter for Chelsea. Scratch that, he shouldn't be an everyday starter for this side. We're in need of a world-class midfielder. Paging Javi Martinez. Or somebody.

It also doesn't help when Daniel Sturridge is pulling a Daniel Sturridge, and Florent Malouda is pulling a Flo Malouda. Neither found high gear, particularly Sturridge who continues to see his stock fall. It's not as if he didn't have chances today, either. Fernando Torres set him up early on only for Sturridge to fluff his lines. Torres also teed up Malouda during the match only for the Frenchman to whip his free header wide of the far post. John Terry had a header cleared off the line by Davide Santon during the second half. There were chances, but still, our attacks were isolated and even in the final 15 minutes, when we really surged forward in search of an equalizer, it never really felt like we were going to break through.

Much of our lack of edge came because of the absence of Juan Mata. We learned once against how dependent we are on the young man who was introduced at halftime, which is something that must be addressed in the summer. Hopefully a combination of Gael Kakuta and Marko Marin (Kevin De Bruyne to be loaned) can help supplement this creative deficiency, but I'm certain we'll need to bring in a top-class product as well - this to go with an elite midfielder, of course.

Perhaps the only positive from the match, at least for us, was the display of Torres. The Spaniard built promisingly on his hat trick performance against QPR last weekend, looking a constant threat during the first half - with or without the ball. He was lively early, linking up with Ryan Bertrand and Malouda on the left side, though openings were at a premium. His passing, as mentioned in the previous paragraph, was incisive, and his industry was top-notch. I don't know how many times he tracked back to dispossess an opposing player during the match.

So, we're out of the race for the top four now, short of an improbable miracle (who can see both Newcastle and Spurs losing four points over the final two games?) so it's time to put all of our focus on the Champions League.  Obviously we need to field a strong side on Saturday in the FA Cup Final - and win that shit - but our final two matches in the league should be planned with a view toward Munich. Hell, recall Josh and let him start the final two league games. Why not?

Just some food for thought. Anyway, that's all I have for now. In the meantime, let's go grab another FA Cup at the weekend. Carefree, bitches.