Two stunning goals from Papiss Demba Cisse sank a substantial portion of Chelsea's hope to finish fourth. The Blues could possibly have done a bit better to prevent the first but the second was pretty much unstoppable. Anyhow, let's take a close look at the two goals to see how Chelsea's defense could have done things differently, if possible. 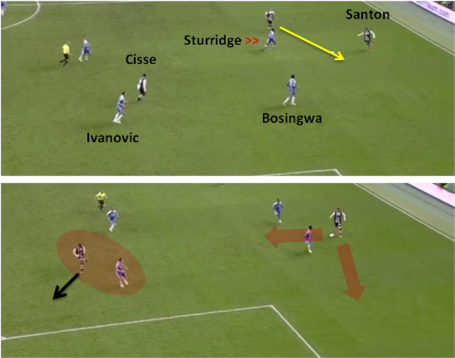 This move started with Newcastle fullback Santon breaking down Chelsea's right. As Santon received a pass on that flank, Bosingwa stepped up toward Santon while Ivanovic had Cisse in front of him. Even Sturridge was tracking back. Everything seemed to be under control.

Two things happened as Santon dribbled forward. One, Bosingwa's defensive position allowed Santon to pick his options -- go down the flank or cut in toward the center. Two, Cisse started to sneak in behind Ivanovic. None of these developments were in Chelsea's favor. It would be better if Bosingwa had closed down the option to cut onto Santon's favorite right foot and let him run down the flank. And it would have been super if Ivanovic didn't give any space to the league's most on-form striker at the moment. As it was, Santon could do whatever he wanted and Cisse had a few steps ahead of Ivanovic. 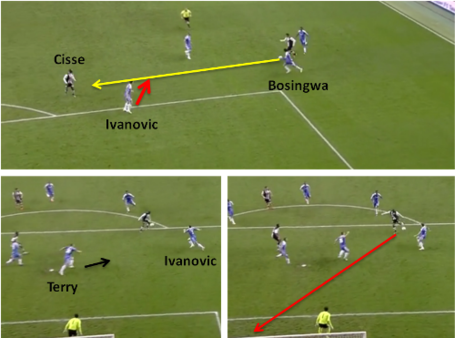 When Santon made the pass to Cisse, Ivanovic had only one defensive option -- intercept the pass. But the pass had pace and he couldn't have gotten to it in time. I think from that point on, there isn't much we could have done to stop the goal. Cisse took one touch before quickly releasing a fierce shot into the far corner. The speed with which he took the shot and the accuracy of the strike make it impossible to defend. On other occasions, Chelsea could definitely have recovered from the initial short-comings from both Bosingwa and Ivanovic but not this time -- not with Big Guy above guiding most of Cisse's efforts into the goal. 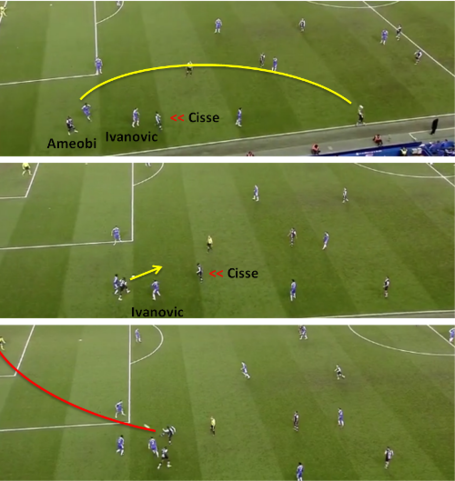 If we are being harsh, we can blame Ivanovic again for letting Cisse free from his marking. From a long throw, Ameobi chest-passed the ball to Cisse. Ivanovic had Cisses in front of him when the throw came in, but he lost the Senegalese yet again when Ameobi got to the ball. But like I said, it would be very harsh to blame him for the goal which came as a result of a curving, dipping, angled-shot from outside the box. It was simply an amazing strike and an absolutely incredible goal. Nothing much we could have done about that.

Conclusions? Bosingwa and Ivanovic could have done better to prevent the first goal. But the second was unstoppable.