Let's put aside the Hulk speculation for a little while and focus on what we've actually got. Or what we're pretty sure we've got: Barring this all being an epic, epic trollfest, Eden Hazard is on his way to Chelsea for next season, giving us an astonishingly gifted player who can play more or less anywhere in a front line except as a true centre forward.

When Hazard is confirmed, the Blues will have a series of tactical questions to answer - they need to try to maximise the talents that they have as well as identifying potential gaps in the team to improve upon over the summer. Let's take a brief survey of our major assets after the jump.

There are other great players on the team, but those five, for me, are the major tactical elements we need to accommodate in a lineup. Specifically, we should be looking very hard at trying to get the best out of the first three while avoiding exposing the fourth and letting David Luiz loose on occasion.

A standard answer to that might be a 4-2-3-1 with Ramires on the left and Mata and Hazard interchanging on the other side, but I'm not entirely sure that that's what Hazard was brought in to do. I'd prefer something a little bit different. Here goes: 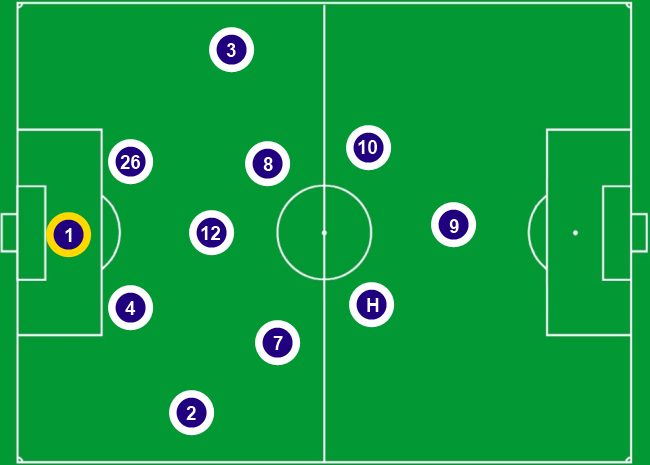 In non-pictorial form, I'd call that a 4-3-2-1 Christmas tree with a midfield three of Frank Lampard, John Obi Mikel and Ramires. There are two main reasons I like this shape - the fact that Mata and Hazard can both play centrally and that Ramires can be used effectively from the midfield without curtailing his attacking runs.

Normally, the Christmas three has one major weakness; namely width. The fullbacks are required to cover the entire flank so that the central players can create, and with the tandem Ashley Cole and Branislav Ivanovic, I don't think that would be feasible under normal conditions.

However, in this case we have three more wide outlets than a normal 4-3-2-1. Both players in the third band are completely happy to play on the flank and tactically aware enough to move there when required, a luxury a system with two more traditional trequartistas doesn't have. We also have Ramires, who in this role would be both a central midfielder and an option to bomb down the right. Tactically, someone who can do that is a very special player, and he gives us the ability to play a more defensive fullback in Ivanovic to solidify the defence.

The major attacking threat of the team comes from the Mata-Hazard axis. They could play both wide if the central midfielders moved forwards, one central, or both central, and all of those options should create plenty of chances for Torres. I envision it as a highly fluid attacking front three, although it would rely on Torres finishing chances, something I don't have complete faith in. Mata and Hazard, however, could look almost Barcelona-esque (the good version, not the pass, pass pass one) on the attack if they can develop an understanding with one another.

If you're a visual person, I've sketched in how I'd expect the players to move around when Chelsea go forwards (in the case of the forwards, be aware that they'd be highly likely to wander about everywhere): 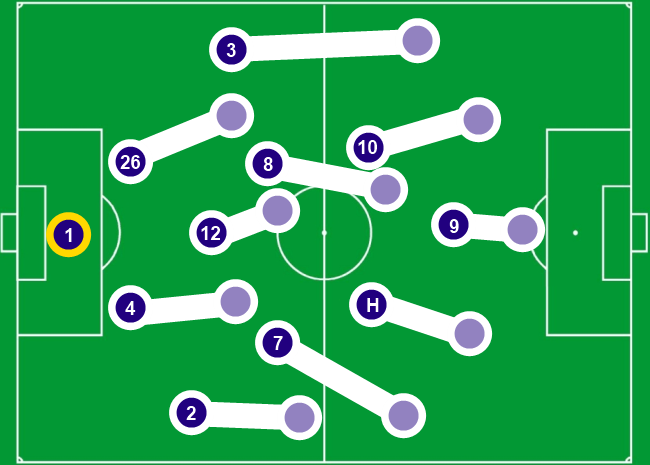 I really, really like this idea, but there's still an obvious weakness we should be looking at addressing - Frank Lampard's role against tougher teams. Or, more specifically, Frank Lampard's ability to protect Ashley Cole when playing against tougher teams. Cole has looked much, much better under di Matteo than he did under Andre Villas-Boas, but a large part of that is due to the fact that the now-departed Salomon Kalou was much more defensively aware than Mata and able to track back and help him out. With no winger in front of him, the onus will fall onto the midfielders to be protecting Cole, and Lampard - who, to his credit, is adapting to a deeper role superbly - may not be the man for that particularly.

Couple that with the fact that it's highly unlikely that a) we can't find a player who's an upgrade on Lampard in terms of game control b) it's similarly unlikely that Lampard will be able to play every match, or near it, as a 34-year-old and c) I have absolutely zero faith in our backup midfielders, and I think Chelsea's next major transfer target should be obvious: The Blues need a central midfield playmaker in the mould of a Nuri Sahin, but one who's also fairly responsibly defensively.

Which leads me to Tottenham Hotspur's Luka Modric. He's obviously not a great buy financially, as he's not young enough to be a two-contract player, but his defensive ability is really understated and he's a superb link player on top of being able to completely control the flow the game. He also really wants to move on this summer. I'd expect Chelsea to be all over him after the Euros.

If Modric (or similar) was acquired, Chelsea could then play with the lineup above with Lampard replaced or a very aggressive one with Ramires at right back and Lampard in the centre that would be designed to absolutely pummel opposing teams. That's on top of the other shapes (4-3-3 with wide forwards, 4-2-3-1 etc.) that the manager could play around with.

All in all though, I think that the Christmas tree is the best option for using the talent we have (or are pretty sure we have) effectively. I really, really hope the manager for next season looks seriously at this option, because combining Mata and Hazard in the middle could be absolutely lethal.