The transfer window isn't even open yet and I'm immensely sick of the Hazard rumours. I'm not tired of the player himself - he's an extremely exciting prospect, and I will probably dance for a long time should he become a Chelsea player - but continuously writing out the latest developments in his massive troll-fest of the market is really boring.

With this in mind, after the jump the latest rumour in the saga, from France's sports newspaper L'Equipe, is displayed in pictorial form. Enjoy, especially if you can read French. 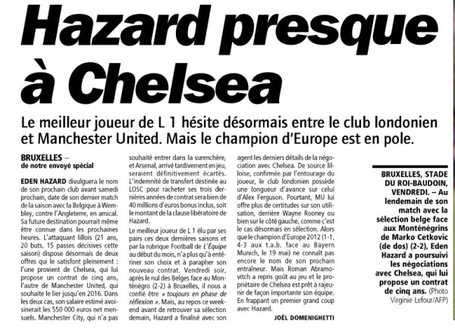 If you can't read French, here's a brief summary: Hazard's apparently signed a five year deal on €126,900 per week, with the transfer fee set at around €40m. According to L'Equipe and Eurosport, City have dropped out of the race due to Hazard's concern over his competition in the squad, while United are still in the hunt despite the player's preference for the Champions of Europe.

Just hurry up and make a decision, Eden.