Share All sharing options for: Bosingwa, Kalou exiting; new deal on for Lampard

Some interesting tidbits have been leaking over the last two days following a silky, under-the-radar Ron Gourlay press conference that went down on Wednesday. We now know that Fernando Torres is the so-called man and that we'll have a permanent manager within weeks.

Gourlay also apparently revealed that Frank Lampard is set for a new deal (really?) and that the club is cutting ties with the fringe pair below. Later, gentlemen. 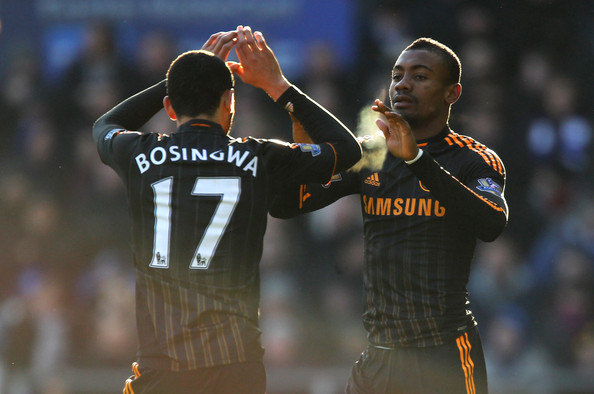 Yes, Jose Bosingwa and Salomon Kalou are set to be released by Chelsea. The announcement was expected today, but I've yet to see anything official.

This isn't anything surprising. In fact, I think most of us expected something like this to occur. I could have potentially seen Kalou working out a deal but it always seemed unlikely. Bosingwa, meanwhile, well, it was time for the club and the Portuguese to part ways. He provided us with some excellence during our majestic Champions League run this season - which should never be dismissed - but overall he has been substandard for some time now. Good luck to both as they look to continue their respective footballing careers elsewhere.

Speaking of overturn, apparently the club are interested in retaining Florent Malouda and Michael Essien for the forthcoming season. Care to explain this one, Ron? It just doesn't make much, if any, sense to keep these two around for another year. Malouda hasn't contributed in a true meaningful capacity for two-plus seasons (apart from a scattering of decency, obviously) and Essien, though one would hope he'll miraculously rediscover himself, appears to be permanently blighted by knee injuries. The dynamism that made him special just looks to be gone forever. Tragic as that is, it's certainly not enough reason to keep the Ghanaian at the club.

Elsewhere, it looks as if Chelsea are interested in offering Frank Lampard a new contract. Yes, you read that correctly. This, at least to me, looks great in concept but absolutely horrible on paper.

Of course it's the Mail so we should take that with a pinch of salt, but most of this information is coming from Gourlay so it's not without merit. Why then would we be willing to not only extend Lampard at his current salary rate but extend him a raise? That just doesn't make sense for a 33-year-old who, while still effective, is going to continue to regress next season. We need to be looking at trimming our wage bill at this point, particularly considering any deal Lampard pens will count toward FFP.

So, intriguing stuff. Some good, some odd. We'll keep you up to date when we receive something official from the club itself.