Didier Drogba is leaving us. I feel it is the right moment for this legend to move on but it is very hard to come to terms with his departure. We all have our different ways of dealing with this kind of situation and mine is to go back and analyze one of the most memorable goals Drogba has scored for us -- the goal in the FA Cup final against Manchester United in 2007. Tear-soaked goal analysis after the jump. 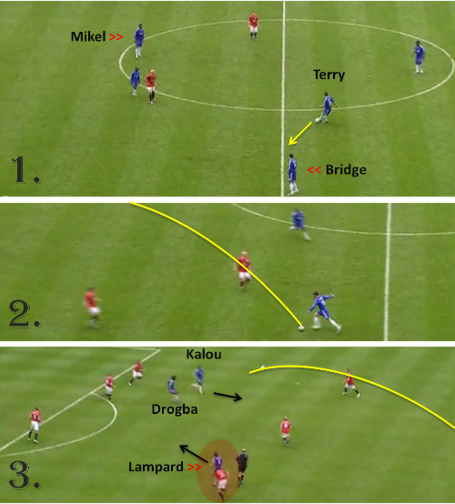 The game was pretty dire. Manchester United took the attacking initiative for the majority of the game but Chelsea was set up, in a typical Mourinho fashion, to break up the oppositions play. Couple that with the fact that both teams have had a long tiring season meant that the game was never going to live up to the pre-game hype. It was 0-0 after normal time, and looked to be heading for a penalty shoot out when Chelsea shown a rare spark of creativity around the 25th minute of the extra time.

John Terry took a short free-kick around the halfway line, laying the ball of to Wayne Bridge (They used to be friends, remember?). The Chelsea left-back then launched a long ball forward, possibly aiming for Drogba. But fellow Ivorian Kalou got to the ball first. Meanwhile, Frank Lampard was surging forward as he often does, looking to link up with Drogba. At this point, the England midfielder was closely tracked by John O'Shea, who replaced Michael Carrick in United's midfield.

[Fun Fact: This is Drogba's first ever goal against Manchester United.]

A Step Back, A Step Forward 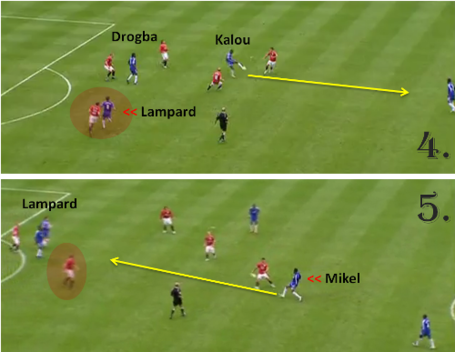 Kalou's decision to pass the ball back to Mikel was a correct one; he was getting closed down fairly quickly and that area of the pitch got rather crowded -- 5 United players vs 3 Chelsea players. The back pass stretched the United midfield, opening up a path for Mikel to make a through-ball forward to Drogba soon after.

Here, Lampard continued his forward run and moved into the space on the right where Kalou had just dropped off. O'Shea then turned his attention to Mikel and stopped tracking Lampard. That meant that Vidic, who was initially watching only Drogba, now had Lampard to worry about too. A classic overload created by Lampard's forward runs.

[Fun Fact: This is the first goal scored at the new Wembley stadium. Of course, Chelsea were also the side that scored the last goal (goalscorer Roberto di Matteo) at the old Wembley.] 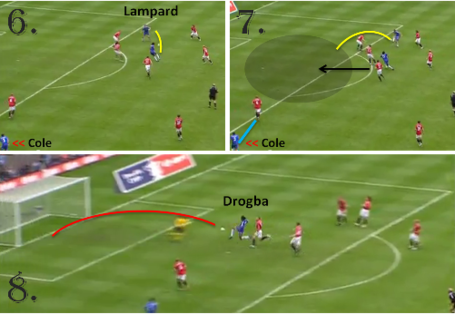 Before we talk about the Droba-Lampard one-two, we should give a hat-tip to Cole, whose presence on the left wing occupied Wes Brown, creating a hole in the center of the United box as Ferdinand and Vidic got dragged toward Drogba and Lampard.

With his first touch, Drogba, facing his back to the United goal, flicked Mikel's through-ball to Lampard before turning to run straight into box. Lampard obligingly opened his body up and side-footed the ball back into Drogba's run. With five United players closing down quickly, this one-two was the only way out of trouble and the two Chelsea players pulled it off brilliantly. This understanding that these Chelsea legends developed over the years was on full display in this goal, and that's probably one of the reasons why this goal is so memorable. From there, Drogba only needed to make a slight touch ahead of onrushing van der Sar to put the ball in the back of the net, securing a domestic double for Chelsea while denying one for Manchester United (Sweet!)

For me, this goal also showed the versatility of Drogba's game. This is a striker known for his strength and power, and the ability to hold off defenders and play as the solitary point of attack. These features only describe part of what Drogba does as a forward. This finale stages of the build-up in this goal shows his technical ability, his positional awareness and his overall intelligence in knowing where to move and when to make the move. He may be typecast as a powerful lone striker, this goal shows he's much much more than that.

Thanks for everything you have done for the club (on and off the pitch), Didier! We love you. We'll miss you. And come back soon!