An Ode to Didier Drogba

Share All sharing options for: An Ode to Didier Drogba 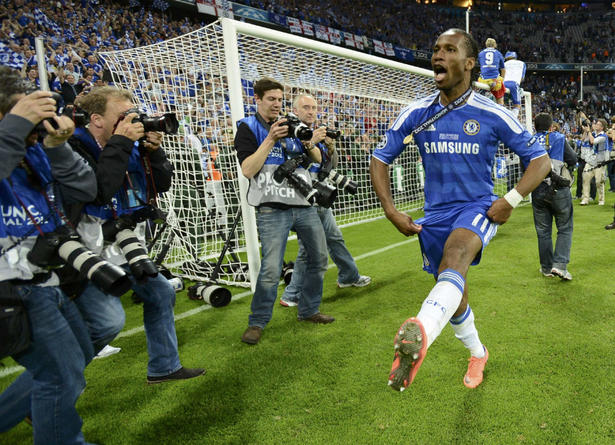 For the better part of my adult life, I've been around football. It's an all-consuming vacuum of sense and reality which has rewarded me with magical displays of individual and collective brilliance. As a team sport, football generally bestows plaudits on those select few men who seem to strike a fine balance between other-worldly talent and self-actualized ignorance. These self-styled 'Giants' are able to carve defenses apart with unparalleled skill, rise to meet the demands of pressure situations without the slightest tingle of fear, and consistently provide fodder for those of us foolish enough to dedicate time, energy, money, and mental sanity to the cause of being a fan. These individual are a rare breed, and few truly qualify for selection. Which is why the news that Didier is leaving this summer has struck a chord in my aching heart.

I'll never forget the moment I realized just what a force Didier was. Somewhere in the haze of my junior year in Boston, Chelsea put pen to paper on a contract with Drogba to release him from a brilliant season in Marseille. His press conference, all hair and brute size, was comical. I recall thinking this guy, while clearly full of talent, would be a mercenary to ride in and score a few brilliant goals before eventually finding his way down to the Bernabeu or elsewhere. He never seemed, at that time, to be someone with blue in his heart. Boy, was I wrong. His immediate impact was one of lasting value- 16 goals and 5 assists in his first season, which would be the first of his eight years in London. He would never score less than 13 in all competitions, and reach an incredible height of 37 goals under the tutelage of Carlo Ancelotti.

Over the years, he's accumulated enough trophies to validate his earnest belief that Chelsea could be one of the biggest clubs in the world, collected individual accolades, scored crucial, punishing, clinical, and mind-numbing strikes that have made the most fervent of dissidents dissolve in a pool of discontent, and proved his mettle as a man of principles by investing heavily in his war-torn Cote D'Ivoire. Through his transgressions, mistakes, and almost-there moments, Didier has grown into our hearts as a man who, when called upon, can be reasonably expected to deliver. There was no player on the pitch in Munich who could have provided the theatrics of an equalizer like Didier, and he knew it. As he's aged, Didier has seeped into our collective subconscious as not only the man for the big moment, but the man overall.

When needed, he has provided what ails us. When called upon, Didier has stood amongst the giants. Without exemption, Didier will leave a legend for all to behold. I could never have imagined that one day I'd have to say goodbye to him, but that time clearly has arrived. It's with a bittersweet mixture of emotions (high and low) that I have to acknowledge the end of an era in Chelsea's illustrious history. Didier's 157 goals, all brilliant and beautiful, will live forever. In his final act as a Chelsea servant, he delivered the one title which has eluded our collective grasp for nine seasons. Perhaps there's no other way to acknowledge his departure than to simply recognize the weight of relief and joy which which he hoisted the trophy. Wherever Didier decides to ply the twilight of his career, many of us will be watching.

Didier is more than a player to us all. He's a living legend, incarnate demigod, and by all accounts, one of the most unique center forwards in the modern era. He'll be criticized forever for his theatrics, and perhaps his reputation will be tarnished by those who would prefer to diminish his achievements for personal profit. But no sensible man could ever deny that Didier will forever be known as the man who rose to meet the demands of the big moment. He was Mr. Chelsea, and will live in our hearts for an eternity. Wherever the road takes him, I'm certain I'll be following. Get him a statue Roman- there's no need to wait ten years. He deserves it now, and maybe moreso than some of the others on the list.

I'll remember him forever as the man who crowned us European Champions. Thank you Didier. Until we see you next time, always be Carefree.